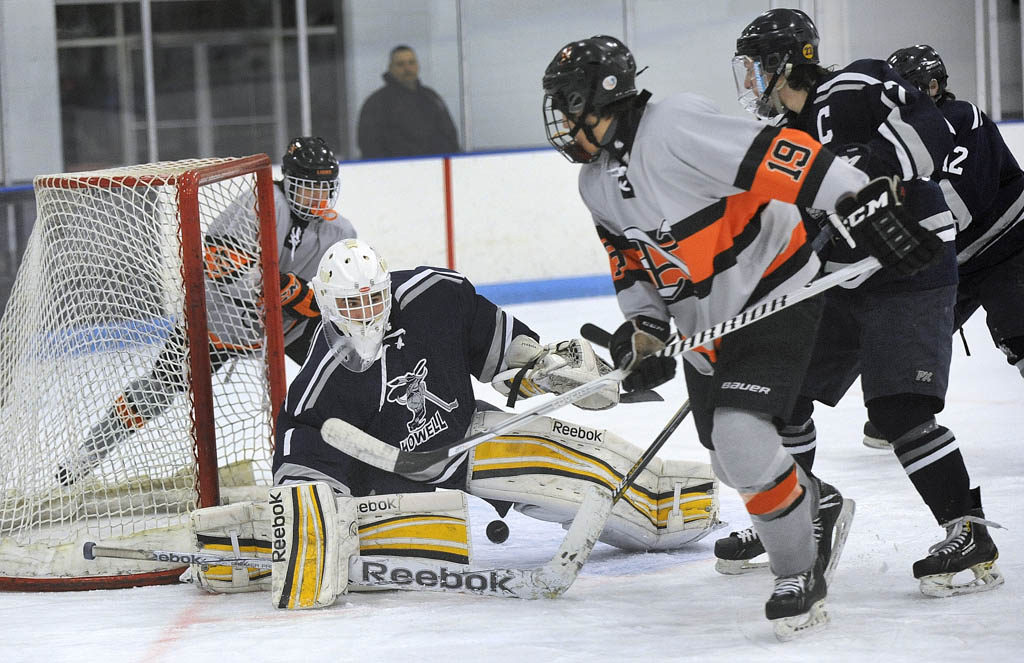 Old Bridge High School’s ice hockey team has put together a 10-7-1 record thanks to a combination of hard work and explosive scoring.

The Knights’ first line of seniors Tyler Kogut, Steve Sapporito and captain Anthony Conti has proven difficult for opponents to contain. Kogut, who netted his 100th career goal earlier in the season, leads the team in scoring with 27 goals and 18 assists. Sapporito has 14 goals to go with 22 assists, while the diligent Conti has collected a goal and three assists while doing what coach Damien LoNigro calls the “little things.”

“Anthony is a real good complement to that line; he’s usually in good position and he stays high,” the coach said. “That’s been our top line all season.”

Kogut is coming off a four-goal performance in a Feb. 3 win over Edison High School, 9-2. Sapporito posted three assists, and sophomore forward Peter Hernandez connected for a pair of goals and an assist.

Old Bridge got off to a 1-3 start this season and was .500 10 games into the campaign before downing Wall High School, Central Regional High School, Edison, South Brunswick High School and Colonia High School in succession.

Shortly before that streak, LoNigro put together an all-girl line of senior center Nora Fogarty and freshmen wingers Heather Figueroa and Martha Dzieniszewska. The three had seen spot duty prior to that but quickly clicked as a line.

“I really hadn’t thought about putting them together. I was testing them out to see how they could handle the competition,” LoNigro said. “They were getting more and more comfortable and one day, it just worked out that they were together. They play our system well.”

Figueroa, who also plays for the New Jersey Rockets girls 16U team, is a speedy skater who plays strong positional hockey.

She began playing hockey on the blue line as part of the Old Bridge Junior Knights travel program and recently made the move to forward. An aggressive forechecker, Figueroa has recorded four goals and seven assists.

Her brother, Steven Figueroa, a senior, is one of the varsity team’s top defensemen.

“It’s pretty cool to be playing varsity hockey with two other girls,” she said. “My goal is to just go out and work hard for 35 or 45 seconds and try to make something good happen.”

Fogarty, who saw some playing time as a junior, is a smooth-skating center who is responsible in her own zone. She began playing at the age of 12 and now plays for the Brick Hockey Club’s 18U girls team.

Adjusting to the body checking element in the boys game was a challenge, but she understands its part of hockey.

“We chose to play with the boys so we don’t expect to be treated any differently,” she said. “There’s really no in-between, though — some guys will run at you and others won’t hit us at all. But it’s part of the game. The important thing to me is that the boys on our team have accepted us. They’ve been great about it. I’m proud to help the team. Everyone works hard, and we’ve had some exciting third-period comebacks.”

After a brief adjustment period, Dzieniszewska has shown she can skate with the puck and forecheck low in the offensive zone. She has recorded three assists thus far and is proud of her contributions to the team.

“It was scary at first,” she said. “I never thought I’d be playing this much as a freshman, so it’s been very exciting for me. My teammates have been awesome. They’ve accepted us and they’re willing to stick up for us if they have to.”

Dzieniszewska began as a figure skater and, like many of her teammates, joined the Junior Knights program. She now plays with Rockets 16U and 14U National teams.

Like her linemate Heather Figueroa, Dzieniszewska also has a brother on the Old Bridge squad — pesky junior center Arthur Dzieniszewski.

“That’s kind of nice, but it’s also a little annoying to have him tell me if I did something wrong,” she said.

The Knights have done a lot of things right this winter, but they have not been able to get past Greater Middlesex Conference (GMC) rival Woodbridge High School, which has won the three meetings between the two teams. LoNigro noted that the path to the finals in the upcoming GMC Tournament will likely go through Woodbridge.

“I think we can beat them,” the coach said. “All three games have been close. If we stay with our system — keeping a forward high and taking care of our zone — we will be all right. We got away from that a little bit in those losses and they were still tight games.”

Old Bridge will be counting on goalkeeper Dan Rubin, who has a .900 save percentage, and a defense that includes standout sophomore James Silva, Steven Figueroa, Jack Morris and Kevin Haslach to take care of business on their side of the ice.