By Frank Mustac, Special writer
Recently hatched fish, about 50 in all, are being raised by 4th-graders at Bear Tavern Elementary School as part of project called New Jersey Trout in the Classroom.
“We have four 4th-grade classes, and each one of them takes part,” said Christopher Turnbull, the school principal, explaining that every school-day morning, a few students from each class attend to the rainbow trout contained in a 55-gallon fish tank. The students test water quality, collect and record data, and fill the fish feeder with food for the freshwater creatures.
Come June, every 4th-grader will have the opportunity to take part in releasing the trout into the wild at the Forest Resource Education Center in Jackson.
While providing lessons in subjects like science, math and geography, this year’s trout project has also given students an experience in perseverance. That’s because the original trout hatched from eggs at the school towards the end of 2015 did not survive into the new year.
“Our first batch didn’t make it,” Principal Turnbull said.
There was a problem with the water chemistry in the tank, he said, explaining that the pH level was not right. With the help of a high school chemistry teacher, the problem was resolved, and a new batch of just-hatched trout was delivered to the school so that the project could go on.
“We looked at it as a positive, as a challenge of not giving up,” the principal said.
Trout in the Classroom is a science-based program that teaches children about the importance of cold-water conservation through a hands-on approach to learning, according to information published on the program’s website njtroutintheclassroom.org/ .
“Through the process of raising brook trout from eggs to fingerlings, the size they are at release time, students learn about the importance of clean, cold water, not only for the brook trout they are raising, but also for the other organisms, including people,” according to the program, which is a collaboration with the state Department of Fish and Wildlife.
Start-up funds for the program, including the little more than $1,000 needed for the fish tank and other specialized equipment, was provided in large part by the school PTO, Mr. Turnbull said.
“There’s a chiller that we have that stays at 54 degrees Fahrenheit, give or take,” he said.
The cost to run the trout program year to year is very low, according to the principal, with just the cost of consumables, like fish food and other supplies.
The Hopewell Valley Education Foundation is also involved in providing grant money, especially for a program to raise another type of fish called shad.
“We’re still actually working on pieces of that, but we did get funded,” the principal said.
The shad program would run from March to May, while the trout program runs from October to June.
Although both programs raise fish, the two projects are very different, Mr. Turnbull said.
“As part of the grant from the education foundation, we also going to get an identical tank to the one we have for the trout,” he said, adding that another tank is planned for tropical fish. “When it’s all said and done, we’ll have three tanks running, but they will all be really different.”  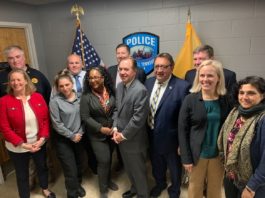 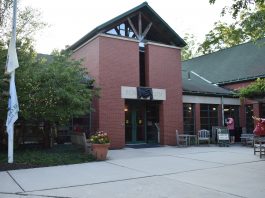