In ‘The Witch,’ these woods are not-so-lovely, dark and deep 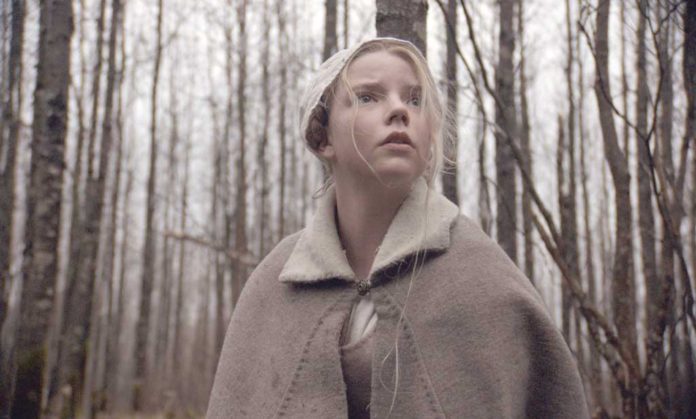 “Did ye make an unholy bond with that goat?”
This line is among the sometimes-tricky-to-listen-to Puritan-ese spoken in The Witch that, out of context, may seem ridiculous. But within the world of writer/director Robert Eggers’ frightening film, viewers will take it in with a shuddering seriousness (a footnote to the film indicates that much of such dialogue was taken straight from source material of the time).
That is part of what makes Eggers so successful in his presentation of his self-described “New England folk tale” — his willingness to fully immerse us in the world of 1630 America (or, what would become America), and his actors’ full commitment to their parts. Most films set in the Puritan era that I’ve seen settle for using somewhat updated language, maybe with a few “thys” and “thines” thrown in with some accents, and let us imagine we are back in that time.
But in The Witch, I find that the strict adherence to not only the communication of the time but also to the everyday rituals and ways of thinking (all of which revolved around God) is key to understanding the characters, and to experiencing their growing terror at what befalls them.
The characters are a family who, for reasons we are not made privy to but seem related to the father’s troublemaking actions (I kind of got the vibe that he was accusing the others of not being religious enough; if you can actually annoy other Puritans with your proselytizing, that is saying something), are banished from their enclosed settlement and forced to live on the outskirts of a creepy-looking woods.
The family consists of father William (Ralph Ineson), mother Katherine (Kate Dickie), older teen daughter Thomasin (Anya Taylor-Joy), her younger brother Caleb (Harvey Scrimshaw), young twins Mercy and Jonas (Ellie Grainger and Lucas Dawson, playing two of the creepiest twins you’ll see outside of The Shining), and a newborn son. All of the actors are exceptional, especially Taylor-Joy, whose character becomes a main focus.
The family’s appearance at the woods is where Eggers’ other directorial talents come into play, when he pits the stark realism of his characters against the increasing phantasms of whatever lurks among the trees. “Folk tale” is an appropriate subtitle for the film, as Eggers creates a brooding, fairy-tale atmosphere, subtly and overtly including elements from such ancient stories that have become embedded into our consciousness: the dark woods that contain a spooky house; a red-cloaked figure running through those woods; babies and children in peril; creepy animals that may or may not speak; and, of course, a witch.
The notion that there is, in fact, a witch (or witches) inhabiting the woods is made clear early on, so it’s the family’s response to the paranormal actions that is fascinating to watch. While Thomasin and Caleb seem to have their doubts that their father’s prayers and preaching are the answer to everything, William and Katherine are determined to pray their way through (though even Katherine begins to wonder if God is ignoring her in the wake of a family tragedy).
In a sense, the film resembles The Shining in that outside supernatural forces play upon a family’s simmering fears and resentments. Here, though, rather than alcohol playing a role as it did in Stephen King’s masterwork, it is the intoxication of religious fervor — and the fact that it cannot explain everything that the family is encountering — that sets many of them over the edge.
Eventually, that fervor leads them to suspecting that one of their members is the witch. In a recalling of the infamous Salem witch trials, where a woman’s sexuality often seemed to be a strong indicator that she was “evil,” suspicion begins to fall on Thomasin, who has developed into a young woman (even her brother is seen stealing glimpses of her cleavage).
Eggers’ subtlety gets this point across, even as he lays out other potential suspects for the family to tear itself apart over. Is it really Caleb, who is already worried that his soul is going to hell, and who returns pretty changed from a trip to the woods? Is it the weird twins, who claim they can converse with a goat named Black Phillip? (Black Phillip, by the way, already has my vote as best new horror-movie character of the year. The intimidating, dark figure steals a number of scenes, and adds another element of “folk tale” to the proceedings, as Satan is often associated with goats in old stories.)
Aside from a few well-placed shock scares, Eggers does a masterful job in letting the horror build up among the family, and among us. If you like your scares to be of the type that slowly get under your skin and stay there, you’ll want to traverse the dark woods of The Witch.
The Witch
Rated: R
Stars: Anya Taylor-Joy, Ralph Ineson, Kate Dickie, Harvey Scrimshaw, Ellie Grainger, Lucas Dawson
Director: Robert Eggers
Grade: A-

Brought to you by the publishers of Channel Guide Magazine, the ultimate TV resource packed with over 200 pages of celebrity news and commentary on what’s new and what’s good to watch. Get Channel Guide at 66% off the cover price: call 866-320-8305 or visit channelguidemag.com/promo.

NEW THIS WEEK
Eddie the Eagle
Rated: PG-13
Stars: Taron Egerton, Hugh Jackman, Christopher Walken, Jo Hartley
Director: Dexter Fletcher
Inspired by true events, this is a feel-good story about Michael “Eddie” Edwards, an unlikely but courageous British ski jumper who never stopped believing in himself, even as an entire nation was counting him out. With the help of a rebellious and charismatic coach, Eddie takes on the establishment and wins the hearts of sports fans around the world with his improbable and historic showing at the 1988 Calgary Winter Olympics.

Gods of Egypt
Rated: PG-13
Stars: Brenton Thwaites, Gerard Butler, Abbey Lee, Nikolaj Coster-Waldau, Geoffrey Rush
Director: Alex Proyas
In this action-adventure film, the survival of mankind hangs in the balance as an unexpected mortal hero, Bek, undertakes a journey to save the world and rescue his true love. In order to succeed, he must enlist the help of the powerful god Horus in an unlikely alliance against Set, the merciless god of darkness, who has usurped Egypt’s throne. This plunges the once-peaceful and prosperous empire into chaos and conflict. Their breathtaking battle takes them into the afterlife and across the heavens, with both god and mortal having to pass tests of courage and sacrifice.

Triple 9
Rated: R
Stars: Chiwetel Ejiofor, Anthony Mackie, Kate Winslet, Norman Reedus, Aaron Paul, Casey Affleck, Woody Harrelson
Director: John Hillcoat
A crew of dirty cops is blackmailed by the Russian mob into pulling off a nearly impossible heist. The only way to execute it is to manufacture a “999,” police code for “officer down.” Their plan is turned upside down, though, when the unsuspecting rookie they set up to die foils the attack, triggering double-crosses, greed and revenge.

3,529FansLike
4,460FollowersFollow
Sign up for our newsletter
Special Sections