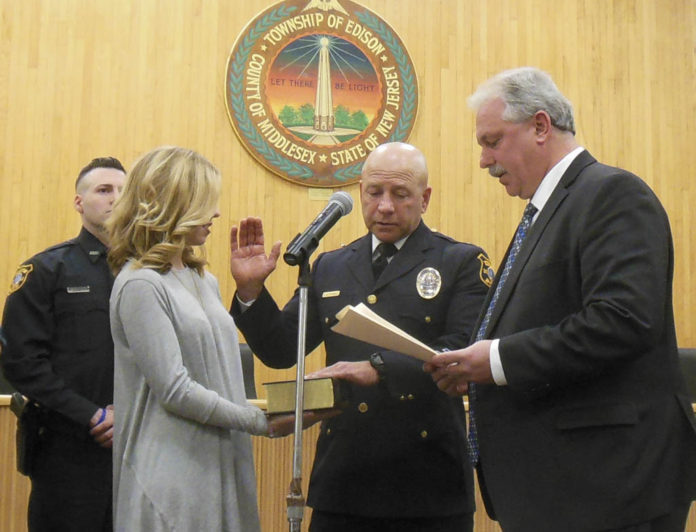 “We can be the best police department in the state,” he said at his promotion ceremony that was held on Feb. 19 in council chambers.

Mieczkowski, a 31-year veteran of the department, challenged the 184 men and women of the Edison Police Department to “raise the bar through the roof” on professionalism and integrity.

“Let’s step it up,” he said adding that they must move forward in a positive manner. “I’ve been here over 30 years and I have seen the good and at the same time I’ve seen the bad.”

Despite some of the bad, Mieczkowski said he sees day in and day out the hard work by the men and women of the department.

“I could not be more proud,” he said.

Hired in 1985, Mieczkowski is replacing Mark Anderko, a 29-year-police veteran, who is currently out on disability leave, which began on Feb. 8.

A provision in Edison’s promotion ordinance allows the mayor, who also serves as public safety director, to promote a lieutenant to deputy chief — bypassing the rank of captain — if that lieutenant has honorably served for four years in rank. The department currently has four captains.

Mieczkowski’s salary as deputy chief will be $192,165, an increase of $20,000 over his current base salary, according to municipal records.

At the ceremony, Mieczkowski became emotional.

“I am very humbled and honored,” he said of the promotion. “For those who know me best, they know how important family is to me.”

Mieczkowski said a big part of the reason why he does what he does is for his late wife Sandra Jean Mieczkowski, who passed away in 2008.

The new deputy chief comes from a long lineage that has come up through the ranks. His brother, George Mieczkowski, served as the Edison Police Chief from 2005 to 2007.

His son Matthew, who pinned the badge on his father at the ceremony, was hired as an Edison patrolman in 2014 and his nephew Brian Mieczkowski, son of his brother, was hired in 2002 and is currently a township detective.

Mieczkowski has a master’s in education from Seton Hall University, which he earned while working full-time for the police department.

In 2014, Mieczkowski was among 10 Edison police officers honored by the 200 Club of Middlesex County for valor for his off-duty rescue of a Hillwood Avenue family from a house fire and for his meritorious service in capturing an armed gas station robber.

Mayor Thomas Lankey said he was proud to promote Mieczkowski and continue to enhance the public safety in the township.

“We have hired 36 people,” he said noting that the department has grown from the 150 or so police officers when he came into office to 184 officers.

Police Chief Thomas Bryan said he welcomed Mieczkowski to the leadership team to help in efforts to foster continued accountability and integrity in the department.

The chief thanked Lankey, his administration and the Township Council for their efforts in helping move the department forward and in the right direction.