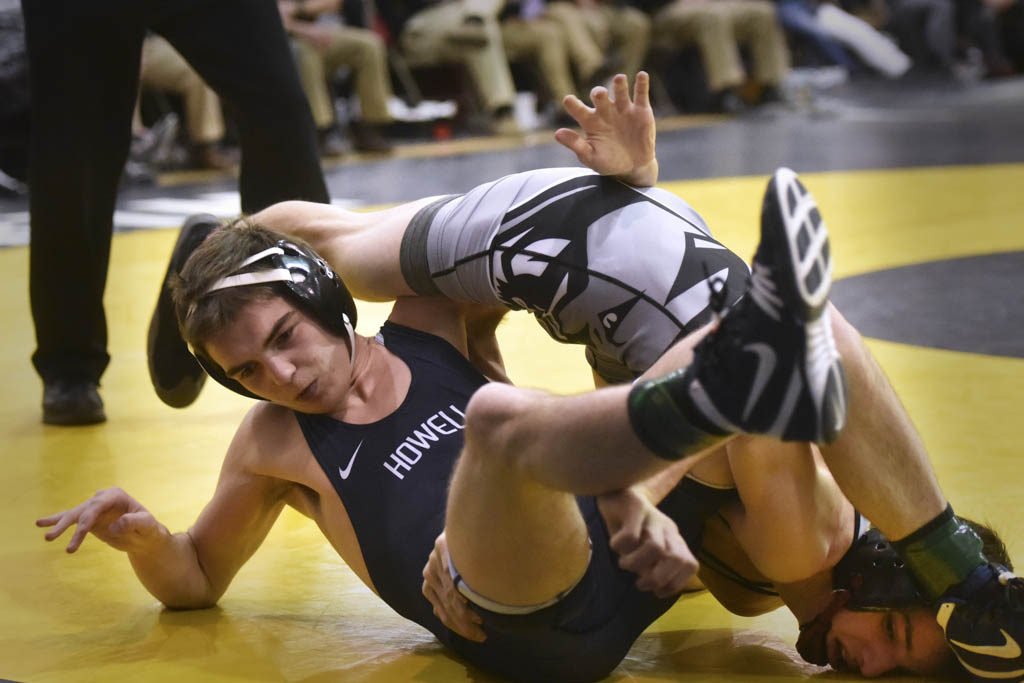 Led by a talented senior class, the Howell High School wrestling team again took its place among the best in the state.

It was a season of mixed emotions for head coach John Gagliano’s grapplers but in the end, they came out on top.

There were the two excruciating losses to Christian Brothers Academy (CBA) — the first by criteria, which ended Howell’s 10-year, 73-meet win streak in the Shore Conference A North Division, and the second in the finals of the Shore Conference Tournament. Howell still had a lot to cheer about, though.

The A North loss to CBA did not cost the Rebels an 11th straight division title. Middletown High School North beat CBA in their dual meet to create tri-champions and allow Howell to claim an 11th consecutive crown. The Rebels won their second state sectional championship in the last three years, beating Old Bridge High School for the NJSIAA Central Jersey, Group V crown. Howell made the Group V finals for the first time in history, where it pushed Southern Regional High School, which was rated the top public school team in the state, to the final bout before falling, 27-24.

While Howell had what is now a routine year, Colts Neck High School had its finest season. Brett Jankos, who was voted by his peers as the District 21 Coach of the Year, led a young Cougars team that was ahead of schedule to a 19-5 record and the semifinals in Central Jersey, Group IV.  With a lineup of juniors and sophomores, look for Colts Neck to be even better next winter.

Manalapan High School kept its place at the table for the Shore’s best team, qualifying for the Shore Conference and Central Jersey, Group V tournaments. The Braves were 18-9.

Ciaccia won more than 30 matches this year (32-9). He was a runner-up in District 21 and reached the wrestleback semifinals in Region 6.

Anthony Gagliano leaves Howell as a two-time District 21 champion and two-time third-place medal winner in the region. He registered one of the school’s highest single-season win totals, going 41-4 to finish his career with 121 wins.

A preseason elbow injury delayed the start of Lindemann’s season, but he made up for lost time. He won his second District 21 title and his first Region 6 championship. He was 27-3 and won 113 matches in a career that included being a state place-winner in 2014.

Howell’s future is in the lower weights, where freshman Diedrich wrestled like a veteran and Slendorn followed up his spectacular freshman season with another 30-win season.

Diedrich continued Howell’s tradition of having a great 106-pounders. He won the District 21 championship, pinning last year’s runnerup Joey King of Colts Neck and earning the Most Outstanding Wrestler Award for the tournament. He was third in the region and went 2-2 in Atlantic City for a 36-9 record on the year.

Slendorn won his second straight District 21 title and was runner-up to state champion Sebastian Rivera of CBA at the region tournament. He went 3-2 in Atlantic City and was 37-8 for the season.

While the lower and middle weights were Howell’s strength, junior Keosseian was the stopper up top. Keosseian won his first district and region championships this year and placed eighth in Atlantic City. With a 40-5 record, he also had one of the winningest seasons in program history. With 91 career victories he’ll join the 100-career win club early next season.

Leonardis, another member of Howell’s talented senior class, was an important part of the lineup, giving the team a solid winner between the 160 and 170 classes. He took second in District 21 and went 28-12.

Plaska closed out his Patriots career in style, winning his first District 21 title and medaling at the region tournament in sixth place. His record was 29-4.

Larkin, also a senior, was the Freehold Regional High School District’s best heavyweight throughout the season. He finished second in District 21 and went 27-8 on the year.

Wrestlers like Ghaida and Thompson kept Manalapan on the winning path.

Ghaida gave the home fans something to cheer about at the district championships, which Manalapan hosted, when he scored points in the final second to beat top-seeded Jeremy Bollard from Jackson Liberty High School, 3-2. The junior went 33-5.

Thompson, a senior, had a 31-6 season and finished third in District 21.

Marlboro’s DeFaria provided the surprise of the District tournament. From the fourth seed, he beat top-seeded Peter Dee of Howell (3-2) and No. 2-seed Khalil Haskins of St. John Vianney High School, 4-3. Both one-point wins came in the waning seconds of the matches. The junior, who missed matches early in the season with an injury, was 19-3.

Barsky is the only Cougar on the First Team thanks to an all-around solid season that included 28 wins and a third-place finish in District 21.

The Colonials’ Downey, another junior, won 22 matches and earned the spot at 182 when he out-lasted Manalapan’s Jake Staklinski in the District 21 third-place match, winning by a 12-11 decision.