Youth soccer tryouts begin in a few weeks, but there will be a far different situation ahead for many returning players and coaches.

The U.S. Youth Soccer Association that administers youth programs nationwide announced three months ago that it is changing its age classifications. Instead of going by a school year style format that has been in place for many years, with the age groups’ timeline starting Aug. 1, age groups will go by the calendar year starting Jan. 1.

For example, players who were on an U10 team last year whose birthdays fell between August and December in the old system will skip a year this season and “play up” on the U12 team, instead of the U11 team where their former teammates will be playing.

That will split up many players who have been together for many seasons.

The new rule also mandates an increase from two regulation-sized fields to four based on age groups and four sizes of goals. The old system had only two sizes of goals  based on the size of the field.

Teams have been notified that they have one year to adjust.

Tyler Isaacson, president of the Matawan Aberdeen Soccer Club, said the change was made for safety reasons to have kids.

The change follows youth hockey that has gone by calendar year for its youth teams’ age groups. But Isaacson said youth soccer players back from last season should be grandfathered under the old system for a few years until they age out of the system. He said the rule change should only apply to new players.

“For example, all 2005 birth year children would be in the same grade. The 2004s (those born in the fall of 2004 who also would be playing on that same U11 team) would be a on an older team this year,” Isaacson said. “Think about what just happened to that existing grade that has been together for years? This comparison is a little extreme but it paints a clear picture of what is happening to thousands of soccer teams across the country. The new U.S. Youth Soccer birth year change going into effect for the fall 2016 in most states has created a panic for many travel teams due to the birth year rule.”

Isaacson said the rule change follows the calendar year standard used by the national team and its training level teams, which Isaacson calls an excuse. Less than 1 percent of the players in this country get to that level, he said.

“Local clubs are scrambling,” Isaacson said. “Local clubs [in neighboring towns] need to work together to make sure a kid has a chance to play on another town league.”

“The response I’ve heard from other towns is it should not have been so drastic, so abrupt.”

“The parents are upset; the kids are upset,” said Ralph Troisi, who helps administer the Hazlet youth soccer program. “The kids should be grandfathered, even if it takes 10 years [for a complete changeover]. They’ve formed friendships and relationships.”

Troisi and Isaacson agree that most youth leagues they’re aware of are working hard to adjust now.

Isaacson said the new age rule more often affects girls programs, where he said some players may have to skip a year to move to an older team that does not exist. For example, a player on an U10 team last season is skipping to an U12 team that the town perhaps does not offer. In those cases, Isaacson said towns often have agreed on arranging to have that player join a neighboring town’s team, but there will be more of that now.

Issacson said younger players are impacted more. Older player can adjust more easily to “playing up.” But younger players who are just developing their skills with players on their level will find themselves on a new team. Players who, in the past, came along with the same players over the years will have to adjust to having new teammates while developing their individual talents.

“The older age groups are less critical and younger kids are most critical,” Isaacson said.

Also affected by the rule change is the coaching. Many coaches who have been coaching a team that includes their son or daughter have moved up year to year with their child. But if that son or daughter is among the players skipping a year, the coach may have a dilemma. Those coaches also may want to skip a year to the older team, but it might already have a head coach who has been in place for a few years. In some cases, Isaacson said, that coach may take his child and coach in another town to coach that age group. He said that already has been addressed in his league and those teams now have co-coaches — the one already there and the one moving up with the child.

“We see where that coach skips the year with his child and you have two coaches on a collision course,” Isaacson said.

As for the fields, there normally were two sized fields in the past: a smaller field for younger children playing 8 on a side for age groups U8 through U11 and a larger one for older players in a full 11 on a side for U12 and older age groups.

The new changes call for the larger existing field for 11 on a side starting with U13 and older teams. There will be a new smaller field for nine on a side for U12 and U11 teams and one smaller for seven on a side playing on U9 and U10 teams. The smallest field for developmental teams have four on a side for teams in U6 through U8.

“Clubs now have to provide four different sized fields and different sized goals as compared to currently using only two. Some towns will struggle to have space to make all these different fields, and the costs to purchase the new goal sizes is taxing on many clubs,” Isaacson said.

Certainly, there will be many adjustments for teams in many ways preparing for the upcoming season. 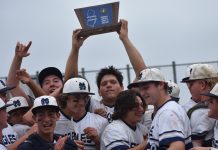