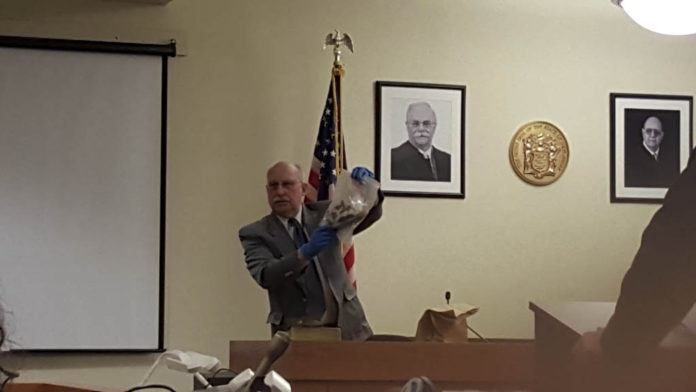 NEW BRUNSWICK — On May 24, 1991, five-year-old Timothy “Timmy” Wiltsey was a week shy of graduating kindergarten at St. Mary’s School in South Amboy when he vanished.

Last week, almost 25 years later, the trial of his mother, Michelle Lodzinski, now 48, on charges that she “did knowingly or willfully” murder her son in 1991 began before Middlesex County Superior Court Judge Dennis Nieves.

Lodzinski was arrested Aug. 6, 2014, in Jensen Beach, Florida, after a Middlesex County grand jury indicted her on the murder charges on July 31, 2014.

In opening statements, Middlesex County Assistant Prosecutor Christie Bevacqua told the 17-member jury panel made up of 10 men and seven women that Lodzinski was a struggling 23-year-old single mother in 1991, who allegedly killed and “dumped” her son in the marshland off Olympia Drive in Raritan Center in Edison because he was her biggest burden, preventing her from keeping a steady job and relationship.

Bevacqua said when Timmy was born in August 1985, Lodzinski, who was just 17 years old at the time, dropped out of high school and left her parents’ home in the Laurence Harbor section of Old Bridge and traveled to Iowa where Timmy’s father lived.

After a few months, with things not panning out between Lodzinski and Timmy’s father, she and Timmy moved back to New Jersey and lived with her older sister, Linda, and her husband in South Amboy until the couple moved to Florida.

Bevacqua said after losing assistance from her older sister, Lodzinski moved into an apartment on Broadway in South Amboy with Timmy. She held a number of jobs, but did not stay in one place for an extended period of time.

“She would often arrange for a babysitter, and if there was no child care, she brought Timmy to work with her,” Bevacqua said.

In the summer of 1990, Lodzinski sent Timmy to live with her brother in Minnesota before enrolling him at St. Mary’s, which provided afterschool care and was close to where they lived.

“Despite the conveniences, Timmy was constantly late to school,” said Bevacqua, noting in a previous motion before Nieves that Timmy’s attendance included more than 60 late notices and/or missed school days.

The assistant prosecutor then continued that on the night of May 25, 1991, at a carnival held at Kennedy Park in Sayreville, a massive search for Timmy ensued after Lodzinski told authorities she had only turned her back on Timmy for a few minutes to get a soda at a concession stand when he disappeared.

The youngster was picked up from school by Lodzinski and plans had been made with her brother’s girlfriend and nieces to attend a local carnival in Sayreville the next day; however, Bevacqua said the jury will hear that those plans never happened.

Bevacqua said on multiple occasions, Lodzinski changed details of her story. One of the stories involved a woman, Ellen, who Lodzinski knew as a client at a previous bank job, who she said was at the carnival with a young girl with two unknown men.

Kevin Skolnik, who was a Sayreville auxiliary police officer working the carnival that night in 1991, testified that Lodzinski did not appear upset and showed little emotion when the search began for her son.

On April 23, 1992, skeletal remains identified as Timothy’s were found in a remote section of the Raritan Center industrial park in Edison, less than a mile from Lodzinski’s former place of employment and about 10 miles from the site of the carnival in Sayreville.

Through testimony, the jury learned that Lodzinski had worked at Florida Fulfillment located at 375 Raritan Center Parkway from September 1988 through March 1989.

Lodzinski’s attorney Gerald Krovatin countered, calling the state’s case circumstantial with no forensic evidence against his client, who he said loved her firstborn son, who was described as a typical five-year-old, carefree, energetic, dug holes in his backyard, loved the Teenage Mutant Ninja Turtles, Halloween, Christmas and Easter.

“She loved Timmy more than life itself,” Krovatin said. “She was a good mother.”

The jury learned that Lodzinski is now a mother of two teenage boys, ages 17 and 14.

Krovatin displayed a slideshow of photographs, provided by Lodzinski’s older sister, Linda, of happy times 25 years ago depicting Lodzinski, Timmy and family members. In one photo, Lodzinski has her arms around Timmy and both of them are smiling.

Krovatin said there is probably nothing more horrible to contemplate than the death of a child, any child, especially one’s own child.

“Maybe worse than that is [the state] turning around, falsely accusing you of murdering your own child,” he said.

Krovatin told the jurors to put themselves in her situation.

“Why are we here 25 years later?” he asked. “Maybe it has something to do with the ones [the media] with cameras and the notebooks. … Maybe that somehow figures into this case.”

Krovatin said the jury will hear about the incredible pressure Lodzinski faced under the media scrutiny and the intense law enforcement investigation, which he said never allowed her to grieve and/or mourn for her son without being under the glare of a microscope.

“One minute [Timmy’s] there and the next he is gone,” he said. “It’s a shock that one cannot recover from.”

Krovatin told the jury to not pass judgment on Lodzinski as they hear testimony of her conflicting statements to police.

“Everyone deals with loss in different ways,” he said.

Krovatin said Lodzinski and Timmy spent the sunny afternoon of May 25, 1991, at Holmdel Park in Holmdel before heading to the carnival in Sayreville.

He noted that Lodzinski, after all these years, never confessed or made any admissions to law enforcement or anyone else.

The 2011 review of the 1991 investigation found that several items, including a blue blanket discovered with Timmy’s remains, had not been shown to relatives who may have been able to identify the objects as belonging to the young boy during the original investigation.

In 1992, both Lodzinski and her mother denied recognizing the blanket when asked by investigators whether it belonged to Timothy, he said.

Middlesex County Assistant Prosecutor Scott LaMountain had said when the case was reopened that “an individual who was a relative and a babysitter … was shown the blanket and immediately recognized it.”

Danielle Gerding, who was 14 years old in 1991, told the jury that she was a good friend of Lodzinski’s niece, Jennifer Blair, at the time, and when authorities showed her the blanket when they reopened the case, she told them she recognized the blanket as being in Lodzinski’s apartment.

She testified that when Blair would babysit Timmy and sleep over her aunt’s home, the blanket was the one she would use when she slept on the couch.

The identification of the blanket led to Lodzinski’s indictment by a Middlesex County grand jury in July, followed by her arrest in Florida and extradition to New Jersey.