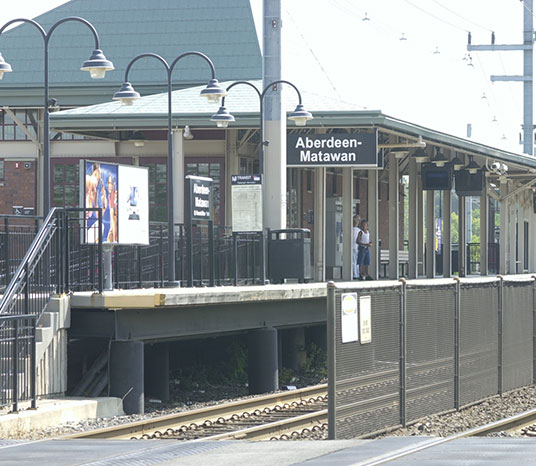 ABERDEEN – Environmental remediation has officially begun on the 14-acre property of the former South River Metals Corp. on Church Street.

The remediation of the former industrial site, which has long been vacant, will pave the way for a new multi-building residential development and new township senior community center.

In a release, Brendan McBride, vice president of development for Montclair-based RPM Development Group, said that the remediation is estimated to take three to four months, and pending final permits, construction could begin in early fall with a target completion of the end of 2017.

The senior residence building, proposed to be called Hudson Ridge Senior Residence at Aberdeen, will offer 75 one- and two-bedroom age-restricted rental units for residents 55 years or older.

The all-ages building, proposed to be called Hudson Ridge Residence at Aberdeen, will provide 70 one-, two- and three-bedroom units.

According to borough officials, preference on the rentals would be given to those households who were impacted by superstorm Sandy.

McBride said residents in the Hudson Ridge development would also be able to utilize new community rooms being planned for each of the buildings, which would offer workshops, financial assistance, physical fitness activities and much more to make it more pleasing to residents and a healthier environment for them to live in.

The former industrial site will also include a freestanding 2,500-square-foot senior community center that would be available for use by all Aberdeen residents, as well as some open space.

McBride previously told The Independent that the combined costs of constructing the project’s two residential buildings totals approximately $44 million and would be constructed with government assistance including Community Development Block Grant Disaster Relief funding, along with four percent low-income housing tax credits and a permanent mortgage from the New Jersey Housing and Mortgage Finance Agency.

“During my six years on the Township Council, the estimated $3 million cleanup cost has been our biggest hurdle because the site is unusable without remediation to state and federal standards,” Councilman Greg Cannon said in a statement.

“With the recent availability of disaster relief funding combined with funds from the New Jersey Department of Environmental Protection/New Jersey Economic Development Authority’s Hazardous Discharge Site Remediation Fund and funds from RPM, we were finally able to find a solution without spending three million of our residents’ tax dollars.”

Wells Fargo Bank will also provide equity to the project through the purchase of federal tax credits.

Aside from the programs that will be offered in the residential buildings’ respective community rooms, the development provides residents direct access to the Henry Hudson Trail, which residents can use for activities such as walking, jogging and biking.

“The township is very excited and happy, and we think this will be a great resource for residents,” McBride told the Independent previously. “I know this has been some time coming, and we look forward to bringing Hudson Ridge to Aberdeen.”

The 14-acre property date to the 1800s when it was the site of a piano manufacturing business. By the 1930s, it become the site of South River Metals Corp., which was an industrial company involved in the manufacturing of railroad siding.

When South River Metals Corp. went out of business, the property was used as a warehouse for a furniture company. After a series of fires, the building was abandoned. With no one paying taxes on the property for a number of years, the town foreclosed on it in 2001 and elected to have it demolished in 2006 due to the presence of asbestos.

“It’s been some time trying to find a developer for this project … but this will be a great addition for Aberdeen,” Township Manager Holly Reycraft said previously.