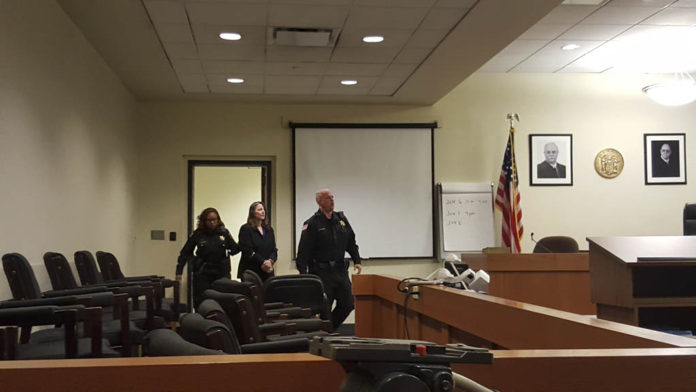 NEW BRUNSWICK — In the days that five-year-old Timothy “Timmy” Wiltsey was reported missing in May 1991, police were following up on countless leads and utilizing strategies offered by the FBI to garner more information from his mother, Michelle Lodzinski.

One of those strategies included bringing in a woman to interview Lodzinski.

The 17-member jury panel sitting on Lodzinski’s trial in Superior Court in Middlesex County learned last week that almost two weeks after Timmy was reported missing, his mother was their primary suspect in his disappearance.

The murder trial of Lodzinski, now 48, on charges that she “did knowingly or willfully” murder her son in 1991 concluded its third week of state witness testimony on April 1. She was arrested Aug. 6, 2014, in Jensen Beach, Florida, after a Middlesex County grand jury indicted her on the murder charges on July 31, 2014.

The jury heard testimony last week from Mary Robillard, a retired investigator from the Middlesex County Prosecutor’s Office, who was asked to assist in the case in 1991.

Robillard testified that she was brought in to see if Lodzinski would respond more quickly to a woman than a man.

The interview took place on June 18, 1991, at Lodzinski’s South Amboy home on Augusta Street. Robillard said Detective Chuck Clark of the prosecutor’s office and Sayreville Detective Sgt. Richard Sloan were present; however, she said they stayed in another room during the interview.

Robillard described Lodzinski’s home as “neat” and noted that the banister was being refinished. She also noticed a series of photos of Timmy leaning up against the wall.

The investigator said she started the interview by showing a series of photographs to see if Lodzinski could identify the woman Ellen she had previously told Sayreville police took her son.

“She was not able to identify Ellen,” Robillard said.

The jury learned that the night that Timmy was reported missing, Lodzinski told authorities she had only turned her back on Timmy, who was about eight feet away from her, for a few minutes to get a soda at a concession stand, when he vanished.

On June 7, Lodzinski told police she lied to them and told them about her encounter with Ellen, a woman that she recognized from a bank she previously worked at, a little girl and two adult white males.

In her statements to police, Lodzinski had said she was held at knife point and threatened by Ellen that she would never see her son again. Lodzinski told authorities that Ellen was supposedly a go-go dancer.

Robillard said she inquired about Lodzinski’s childhood years where she learned Lodzinski’s mother married twice and her father was an alcoholic. Her mother was the disciplinarian.

Lodzinski had told Robillard that when she found out she was pregnant with Timmy in 1985 she had already dropped out of school and did not tell her parents.

“[Lodzinski] said she felt she did not want a boy, but knew she would have one,” said Robillard, who said the inquiry into Lodzinski’s statement was not explored any further.

Robillard said she did explore how it was being a single parent with Lodzinski and how she disciplined Timmy.

“[Lodzinski] denied any difficulty at first, but acquiesced and said ‘I got myself into it,’” she said.

Lodzinski told Robillard that Timmy woke up around 8:30 a.m. on May 25, 1991, and watched cartoons as she started to do laundry. She said they did not have air conditioning so they slept downstairs.

Around 2:30 p.m., Lodzinski said she and Timmy went to Holmdel Park for the petting zoo, played football and got popcorn at the concession stand. After, the mother and son headed to the carnival at Kennedy Park in Sayreville.

Robillard said she asked Lodzinski why she did not raise hell when she was held at knife point by Ellen.

“Michelle hesitated and said I thought the man had a knife on [Timmy] as well,” she said.

Robillard said she also asked Lodzinski what the worst part about Timmy missing and Lodzinski said the loss of control she had.

Robillard noted that she referred to Timmy in the past tense to garner any response from Lodzinski; however, she said there was no reaction from Lodzinski.

Robillard said she had also picked up a stuffed animal of Timmy’s and put it on the table during the interview and said Lodzinski had “absolutely no reaction” toward it.

During cross-examination, Lodzinski’s attorney Gerald Krovatin asked if Lodzinski expressed any difficulty with Timmy and/or if there was any physical abuse reported.

Robillard said there was no information given about any abuse.

Krovatin asked why Robillard did not mention in direct testimony about her memo stating that she had broached to Lodzinski one of her statements with the state police questioning her if she had hurt Timmy during the interview.

Robillard had asked “Did you?” and she noted that Lodzinski burst into tears stating, “He was the most important thing to me.”

Robillard apologized and said she overlooked the statement.

Krovatin asked Robillard if she recalls when Lodzinski was running out of her house she had told Detective Sgt. Sloan that, “All I want is my boy back.”

Robillard said she did not recall if Lodzinski had said that or not.

The jury also heard from Lodzinski’s boyfriend at the time, Bruno, who worked with police to record conversations with Lodzinski regarding her story about how Timmy went missing and Police Sgt. Jeffrey Sprague, of the Sayreville Police Department, who investigated various go-go dancer clubs to find the woman Ellen.

Sprague said the investigation did not produce anybody who recognized the composite sketch of Ellen. He said some people said the woman looked familiar, but police did not get any concrete information on who she was.

The jury heard the recorded statements between Bruno and Lodzinski. The pair had dated off and on for two years leading up to Timmy’s disappearance.

When Bruno asked why Lodzinski did not tell police about Ellen and being held at knife point in the first place, Lodzinski told him that she didn’t want to get in trouble and didn’t want people to think she was a bad mother.

Lodzinski, in the recording on June 8, 1991, repeatedly told Bruno that she was not lying about what had happened with Timmy at the carnival.

The trial is expected to last for three months.