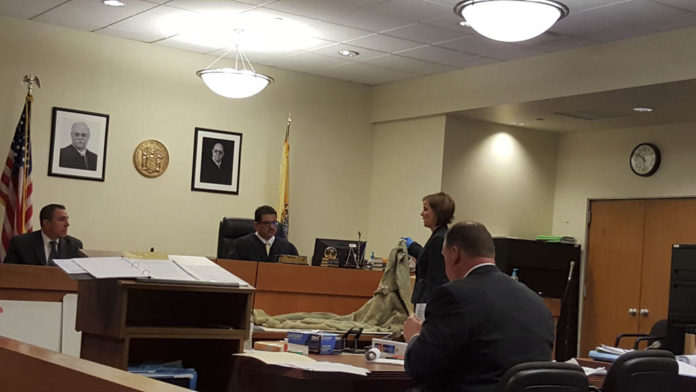 NEW BRUNSWICK — An anonymous tip that came into the Crime Stoppers hotline on June 1, 2011, about the disappearance of Timothy “Timmy” Wiltsey in May 1991 prompted the reopening of the cold case.

Police Sgt. Scott Crocco of the Middlesex County Prosecutor’s Office told the jury sitting on Michelle Lodzinski’s murder trial that he followed up on the tip, which his office determined was inaccurate information; however, it prompted his decision to reopen the 25-year-old case.

“I did an overview of the case and I felt the case could be solved and we could get closure on it,” he said.

The murder trial of Timmy’s mother, Lodzinski, now 48, on charges that she “did knowingly or willfully” murder her son in 1991 concluded its fourth week of state witness testimony on April 7 in Middlesex County Superior Court, New Brunswick.

After reviewing the entire case file, Crocco said the investigation in 1991 and 1992 was complex, involving multiple jurisdictions.

“I felt it was significant to simplify the investigation,” he said.

Crocco said they focused on where Timmy’s skeletal remains were found in a drainage ditch at the Raritan Center, Edison, on April 23, 1992, and the items found in and around the drainage ditch, which included a blue and white blanket, a pillowcase, a Teenage Mutant Ninja Turtle balloon and shoe, some plastic bags and waistbands of a size six boy’s underwear and shorts.

“We felt if we could link the items to the defendant [Lodzinski], it would be very powerful,” he said.

Crocco said the renewed investigation involved interviews of the people who were close to Lodzinski during that time of her life in 1991.

The investigation discovered that the items found had not been shown to relatives and friends who may have been able to identify the objects at the time.

The identification of the blanket by people who babysat Timmy led to Lodzinski’s indictment by a Middlesex County grand jury on July 31, 2014, followed by her arrest in Florida and extradition to New Jersey on Aug. 6, 2014.

During the trial, Danielle Gerding, who was 14 years old in 1991, told the jury that she was a good friend of Lodzinski’s niece, Jennifer Blair Dilcher, at the time. When authorities showed Gerding the blanket when they reopened the case, she told the authorities that she recognized the blanket as being in Lodzinski’s apartment when she lived on Broadway in South Amboy.

In tears, Dilcher testified last week that she recognized the blanket, turning away as Assistant Prosecutor Scott LaMountain held it up.

Dilcher said she used the blanket to snuggle up with Timmy at Lodzinski’s apartment on Broadway.

The blanket was found by retired FBI agent Ron Butkiewicz, who investigated the case in 1991 and 1992.

Crocco said in his overview of the case reports, he did not find that any of the items had been shown to anyone.

“The blanket was sent for FBI analysis shortly after and stayed there for a long time,” he said, adding that the investigation of the blanket “slipped through the cracks” during the original investigation.

Gerald Krovatin, Lodzinski’s attorney, asked if Crocco knew the blanket was shown to Lodzinski and her mother, Alice Lodzinski, in 1992, and they told investigators that they did not recognize it.

Crocco said he did not see anything in the case file, but he said he did hear that it was shown to Lodzinski and her mother at the time.

Both hairs were analyzed by forensic scientist Ed Gainsborg from the State of New Jersey Police Lab Trace Evidence Unit and Charity Holland, a scientist, who worked at Mitotyping Technologies in Pennsylvania.

Gainsborg said the hairs found on the blanket and pillowcase did not compare to the hairs that were collected from Lodzinski in 2012.

Holland said her lab conducted a mitochondrial DNA test on the hairs. The results of the hair on the blanket came back inconclusive when compared to Lodzinski’s hair.

“That means we could not exclude or include [Lodzinski as the owner of the hair],” she said.

On cross-examination by Krovatin, Holland said she could not determine that Lodzinski’s hair matched the hair on the blanket or not.