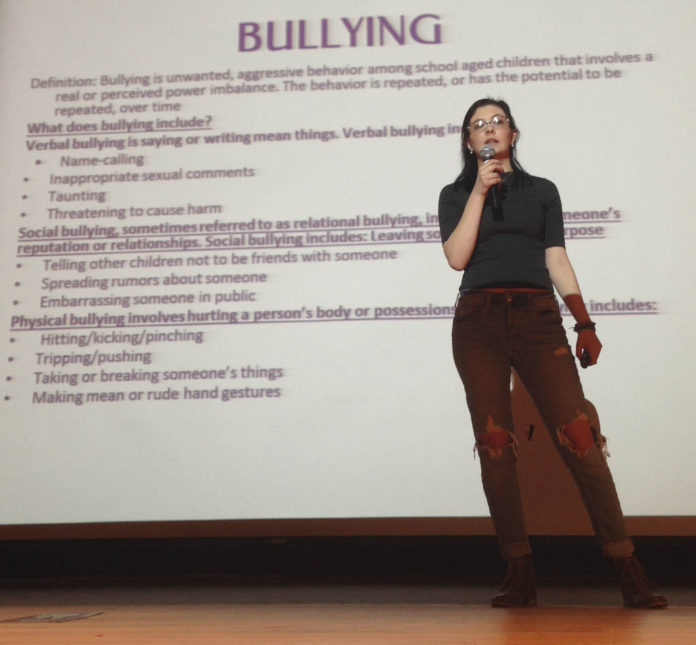 OLD BRIDGE — After someone she knew committed suicide, Old Bridge High School sophomore Kayla Daurio took her passion for getting the message out about mental health issues and bullying to her peers.

With support from Schools Superintendent David Cittadino and Old Bridge High School Principal Vincent Sasso and with the help of fellow sophomore Victoria Mione, Kayla delivered a moving presentation on the stigma surrounding mental health to the entire sophomore class during each English class over a two-day period in March.

The half-hour presentation was closed to the media; however, Kayla spoke to Greater Media Newspapers about its importance and her goals moving forward with the presentation, which she developed on her own.

“I always felt there was a stigma around mental health,” she said. “I wanted to do something to raise awareness on mental health and bullying.”

The presentation began with a timeline of decades. Kayla said she asked her peers to think of life goals for every decade, which included going to college, getting a job, skydiving, riding a horse, getting married, having kids, having grandkids and more.

“Then I started deleting [decades],” she said, explaining that a person struggling from mental health who takes his or her own life would not be able to realize those goals.

In her presentation, Kayla showed a five-minute YouTube video called “I Jumped Off the Golden Gate Bridge” which details the emotional journey of a man who, suffering from serious mental health issues, decided to take his own life by jumping off the San Francisco landmark but survived.

He describes the impact his decision had on his family, how he bounced back from rock bottom and how he is being treated and coping with his mental illness.

Also included in the presentation were definitions of mental health and bullying, alarming statistics, and how to help.

Students who experience bullying are at increased risk for mental health issues and may experience sleep difficulties, anxiety and depression, Kayla said.

“Suicide is the third leading cause of death among young people, resulting in about 4,400 deaths per year,” she said. “For every suicide among young people, there are at least 100 suicide attempts. Over 14 percent of high school students have considered suicide, and almost 7 percent have attempted it.”

Nearly 30 percent of students are either bullies or victims of bullying, she said.

“There were parts of the presentation where there was complete silence,” she said.

Kayla said she has received positive feedback from her peers and the school administration.

She said she is in discussion with school officials to share her information with the freshman class, and added that she hopes to continue to be able to disseminate her presentation in order to reach more of her peers.