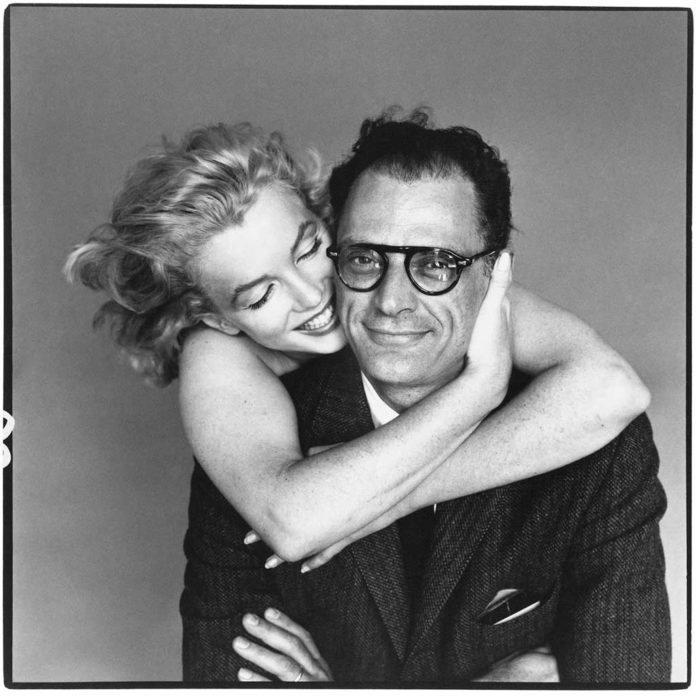 A Hollywood blond bombshell who longed to be taken seriously as an actress. A respected playwright who longed to be freed from a failing marriage. At even a casual glance they must have seemed an unlikely pair; in fact, upon their marriage, one headline proclaimed, “Egghead Weds Hourglass.” But when Arthur Miller saw Marilyn Monroe for the first time, on the set of As Young as You Feel, the spark was unmistakable.
“When we shook hands,” he wrote in his autobiography, Timebends, “the shock of her body’s motion sped through me.”
Monroe’s initial feeling about Miller, when she met him at a party several days later, also provoked a striking if somewhat opposite physical response — “Like a cool drink when you have a fever.”  They talked for hours, and Miller’s insistence that Marilyn should take acting lessons, his evident belief that she had the requisite talent for a Broadway career, made an indelible impression on the former Norma Jeane Mortenson. She wouldn’t see him again for four years, but she registered for courses in art and literature and embarked on a self-improvement regimen. Marilyn had fallen hard for a writer outside the Hollywood system, which may well have contributed to the attraction.
The pair met regularly but secretly throughout the summer and autumn of 1955, and the following June, Miller announced their upcoming nuptials in an unusual fashion: at his appearance before the House Un-American Activities Committee, where he was questioned about his political leanings. They combined their honeymoon with Marilyn’s filming of The Prince and the Showgirl in London, but in addition to on-set problems caused by her erratic behavior, the marriage was shadowed by an early miscarriage that devastated Monroe.
“It was going to be a surprise,” she sobbed to production assistant Colin Clark. “Then he would see that I could be a real wife, and a real mother.”
While they enjoyed a cozy domesticity at their Long Island farmhouse in 1957, it didn’t last long. Marilyn lost another much-desired child, and her increasing reliance on drugs put a serious strain on the relationship, especially when she twice overdosed.
But the worst blow came with Marilyn’s accidental discovery of an entry in her husband’s notebook, in which he admitted his disappointment in her, his fear that she would threaten his creativity and his regret over their marriage. Marilyn also claimed that he wrote, “The only one I will ever love is my daughter.”
Partly to help console her for the loss of their child, partly as “the expression of a kind of belief in her as an actress,” Miller wrote The Misfits for Marilyn in 1960. Yet by the time the John Huston-directed film got underway, Miller said, “The film was there but the marriage was not.” The couple separated late that year and divorced in 1961.
The following year, Marilyn was dead of a barbiturate overdose. Despite the bitterness that plagued their short union, she had kept all Miller’s letters to her — tied in a bundle and found after her death.