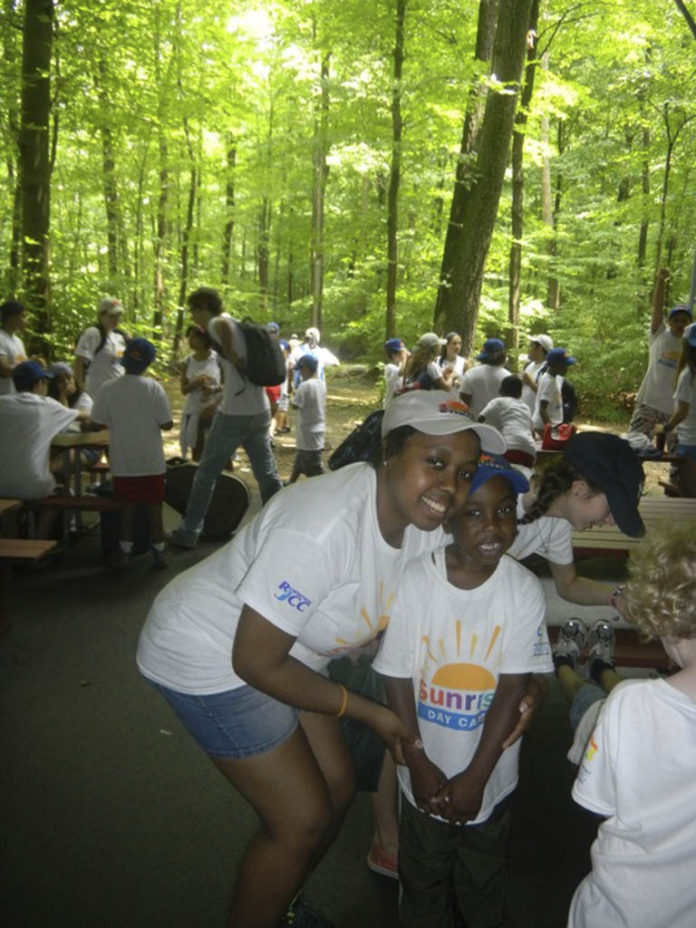 When he was three years old, Jaeden Prince was sitting on the floor, playing as any child would at his age. But when he looked up at his mother Xiomara Mitchell-Prince and his eyes crossed, she knew something was wrong.

“Call it a mother’s intuition,” she said.

Mitchell-Prince decided to bring her youngest son to the pediatrician, who said nothing was wrong. However, she was referred to an ophthamologist in Westfield, who decided to dilate Jaeden’s eyes and send him for an MRI.

Because a child is sedated for an MRI, Jaeden was recovering from the anesthesia at home. He was crying in his highchair when Mitchell-Prince answered a call from their pediatrician, who kept apologizing.

“I’m not understanding what’s going on,” the North Plainfield resident recalled of the conversation at the time. “Then the pediatrician said, ‘Your son has a brain tumor.’ … I forgot how to spell, I forgot my numbers, I couldn’t think.”

Mitchell-Prince was able to compose herself, put Jaeden back in the car and head to New York. On Oct. 5, 2010, he had surgery, and then spent three months in the hospital having radiation five days a week for six weeks. He had to learn how to walk and talk again, he was fitted with a breathing tube and a port, and he didn’t come home until after Christmas that year.

He was able to return to kindergarten but still had the feeding tube for a few more months, he had to wear a helmet to protect his head and he continued with MRIs and oncologist visits.

“But Jaeden always had a smile on his face,” his mother said.

One major reason Jaeden smiled was because of Sunrise Day Camp.

Mitchell-Prince learned of the summer day camp program for children with cancer through the wellness program coordinator at the Hassenfeld Children’s Hospital at NYU Langone Medical Center in New York, where Jaeden was being treated.

“Let me take a deep breath. Let me think about this,” she said, laughing about her initial reaction to her son being an hour-and-a-half away every day at the closest Sunrise Day Camp, which was located in Pearl River, N.Y.

She decided to take her then-six-year-old for a visit, and they both loved it.

Mitchell-Prince said Jaeden enjoyed swimming and basketball the most. She said his “shirt was always brown” from playing all day, and that his favorite color changed depending on his team color for the day.

“He was knocked out but he loved it,” she said. “He would wake up in the morning ready to go on the bus.

“He looks forward to it. He knows when school ends,” she continued. “It’s some kind of normalcy in his life.”

Sunrise Day Camp offers the only full-summer-long traditional day camp program in the world for children with cancer and their siblings, since children are often isolated from normal childhood activities while their siblings are sometimes lacking in attention from their parents.

Central and Northern New Jersey will now have direct access to the program at a new 194-acre camp in Staten Island on Hylan Boulevard, which is the only location in the metropolitan New York/New Jersey area.

Children ages 3-and-a-half to 16 who have been diagnosed with any type of cancer within the past five years, with permission from his/her doctor at his/her treating hospital, can participate in activities such as swimming, mini golf, sports, nature, yoga, arts and crafts, music, drama, group games, etc. The Staten Island camp will run from July 11-Aug. 18. Camp hours are 9:30 a.m.-4 p.m. weekdays, though before care begins at 7 a.m. and aftercare ends at 6 p.m.

“It’s a traditional day camp but it’s modified for children with special abilities,” said Rebecca Gallanter, assistant executive director for the JCC (Jewish Community Center) of Staten Island, noting that, for example, volleyballs will be softer to avoid bruising or children can play in a spray park so as not to be submerged in water in case they have a port implanted for chemotherapy treatment.

“The focus of the camp is not cancer. We try to give them a getaway from cancer and getaway from the medical,” said Gallanter, an East Brunswick resident. “It’s a wonderful respite for the families and gives them a typical summer.”

The camp has nursing staff available all day, as well as a medical adviser affiliated with the Sunrise Association. An ambulance will be on call to transport children to their home hospital in the event of a cancer-related issue, Gallanter said, though any child with an immediate emergency will be brought to the nearest local hospital.

From a medical point of view, the camp is beneficial to children and their families, according to Linda Palkoski, clinical nursing director for the pediatric intensive care unit’s pediatric oncology services at the Bristol-Myers Squibb Children’s Hospital at Robert Wood Johnson University Hospital in New Brunswick.

Although this will be the first year the hospital will be partnering with the camp, Palkoski  said that in addition to test and treatment schedules, children must have activities that support their growth and development.

“There are a bevy of studies that support the fact that there is a connection between exercise and well being as well as the protective effects against disease in general with regard to exercise,” she said. “Sunrise enriches the lives of children by providing the means for children with cancer and siblings to have fun in a carefree atmosphere. … The benefit is the camp is a day camp, allowing for ease and flexibility in scheduling of tests and treatments.”

“These children and their siblings and their families — a lot of them, their lives are completely lived in a hospital and they are isolated … because their immune systems are low,” Gallanter said. “Having his camp program may be the only time they are socializing with others.”

The history of Sunshine Day Camp dates more than 10 years. Arnie Preminger, the current president and CEO of the Sunrise Association, was the CEO of the Friedberg JCC in Long Island when he attended a benefit for Paul Newman’s Hole in the Wall Gang Camp sleepaway camp for children with life-threatening illnesses.

“I was so moved by what I saw that night,” he said. “The need for this type of camp became more and more compelling.”

The first camp opened in 2006 in Long Island. Four years later, a camp opened in Israel due to ongoing relations with the JCC; Preminger said the rates of pediatric cancer in Israel are similar to those in New York. The third camp opened in Pearl River in 2013.

The Sunrise Association was then founded in 2014 to oversee and build new camps. The Staten Island and Baltimore camps are set to open this year.

Since cancer is “devastating to the entire family economy,” according to Preminger, the decision was made to offer the camp to siblings.

The decision to offer camp, and transportation, 100 percent free of charge to families, was based on the extreme financial burden on families, regardless of good health insurance or adequate income, Preminger said, as well as to avoid parents filling out financial paperwork to pay for camp.

As a result, all of the gratis programs are courtesy of 100 percent fundraising. In Staten Island, the cost is $6,000 per camper, and the hope is for the JCC of Staten Island to raise $500,000 each year. With $57,000 being raised from a Sunrise Walks event, in addition to a $100,000 pledge from a private donor, the organization also seeks donations from its Founders Circle and public fundraisers.

To help fundraise for the camp, the SunriseWALKS event will be held June 5 at the Mount Loretto Campus/Catholic Charities of Staten Island, 6581 Hylan Blvd., Staten Island. Registration begins at 8:30 a.m. followed by the walk at 10 a.m. The fee is $20 for adults or $10 for children age 12 and younger.

In addition, the program offers year-round activities such as barbecues and bowling outings, as well as visits to local hospitals from volunteers and camp counselors.

“They stay connected with their friends throughout the year,” said Gallanter. “It’s a way to bring smiling faces and activities to children.”

For information on Sunrise Walks, contact Ilene Rosen at 718-475-5213 or irosen@sijcc.com, or visit www.sunrise-walks.org/SI.

For information on individual giving, contact Kevin Brosnick at 718-475-5256 or email kbrosnick@sijcc.com.

For more information on the camp itself, visit www.sunriseassociation.org.