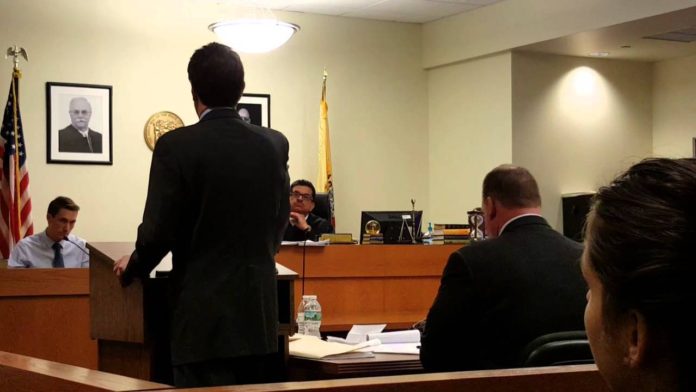 NEW BRUNSWICK — Five-year-old Timothy “Timmy” Wiltsey may have been strangled by a man on the run from police in Arizona, according to a defense witness, Damien Dowdle.

Gerald Krovatin, defense attorney for Michelle Lodzinski, who is being tried for the murder of her son Timmy in 1991, presented Dowdle, a convicted bank robber, as a third party guilt witness on April 27 in Middlesex County Superior Court.

Dowdle, of Tucson, Arizona, told the jury that he and Bernard Joseph McShane, who he said molested him when he was 17 years old, went on the run in 1990 after committing robberies of a video store, a fast food restaurant and a gas station in Arizona.

Shortly arriving in Texas, he said the two men split ways before meeting again in a prison cell in Arizona a year later.

While in prison, Dowdle said McShane opened up about what happened when they split ways.

“He told me he ended up going to the East Coast area … killing a little kid over by ‘Atlanta City,’” Dowdle said, explaining that he thought McShane was referring to Atlanta, Georgia, at first.

Dowdle said McShane told him that he was really bored trying to find things to do.

“He went to a park area and there was a big event going on nearby,” he said.

Dowdle said at the event, a little boy had gone off into the woods, which he said he could not remember if McShane said he lured, enticed and/or the kid went into woods by himself.

“[McShane] took the opportunity to attempt to molest this kid,” he said. “The kid started screaming and crying and Joe got scared … I remember him saying there were people not far at all and he ended up killing the kid.”

Dowdle said he had learned from another cell mate that the place McShane was talking about with gambling and beaches was more likely Atlantic City in New Jersey.

He said he told Scottsdale Police Detective Thomas Van Meter, who is now retired, of McShane’s story in 1992.

In March 2015, Dowdle was released after spending 18 years in prison for bank robberies he committed in 1997. He said McShane’s story was always in the back of his head.

“It was bothering me for the longest time,” he said, explaining why he reached out to Krovatin, adding that he does not know Lodzinski.

Dowdle said he had little access to the Internet while in prison. Once he was released, he ended up searching key words of McShane’s story in an Internet search and was struck by the similarities of the disappearance of Timmy and McShane’s story.

He told the jury he did not contact prosecutors about McShane’s story in 2015 because he felt police had already “dropped the ball” when he first told the story in 1992.

Under cross-examination, Dowdle refuted information in Van Meter’s report that he told him McShane’s story involved a mother, daughter, son and boyfriend and the boyfriend had abused the daughter and hit the boy.

Dowdle answered that Crocco could not definitely say McShane was not in New Jersey.

Bevacqua asked Dowdle if he was attempting to catch McShane at the trial.

Dowdle answered “No,” shaking his head.

Michael Lynch testified that the night of the carnival on May 25, 1991, held at Kennedy Park in Sayreville, he and his ex-wife were walking to their car, which they parked near the apartment complex to avoid the carnival traffic.

He said he observed a car drive down toward the apartment complex with its headlights out. He said two men inside the car then ran into an apartment and came out with a four-foot object rolled up in a carpet or a sheet and threw it in the trunk.

Lynch said it was dark and he could not recognize the two people he observed.

The jury had previously heard testimony that Lodzinski told police that a woman named Ellen, who she recognized as a client at an Amboy Bank she used to be employed at, put Timmy on a carnival ride as she went to get a soda.

In another interview with police, she told police that Ellen was a go-go dancer and was with two scraggly looking men and a young girl. She said Ellen and the two men had put a knife on her and threatened her if she said anything and left with Timmy.

The trial is in its third month.