By Bob Nuse, Sports Editor
When the United States men’s ice hockey team defeated the Soviet Union in the 1980 Olympic Games, the upset was considered the biggest in sports history.
While there was no betting line on the chances of the United States team being the Soviet Union and going on to win the Gold Medal, the general feeling at the time was the American’s went into the Olympics a 1,000-1 underdog
When Buster Douglas topped Mike Tyson for the heavyweight boxing title, Douglas went into the fight a 42-1 underdog. The win by Douglas is considered the biggest upset in boxing history.
The biggest longshot to win the Kentucky Derby was Donerail, who won the 1913 edition of the race at odds of 91-1.
The history of sports is filled with huge upsets and surprising results. But there may never be another to rival last week, when Leicester City captured the English Premier League championship.
Leicester City entered the season with odds of 5,000-1 to win the league championship. The club was nearly relegated to a lower division after a dismal season last year that included a 13-match winless streak. They were only promoted to the top division two years ago and had never won a top tier title.
“It’s hard to think of anything that equates to it in another sport because the season is so long — 38 games,” Princeton University men’s soccer coach Jim Barlow said. “It’s even more incredible than a lower seeded team winning March Madness because there are so many games. They play Manchester United and Manchester City twice, Chelsea twice, Arsenal twice, Liverpool twice, and so on and so on.
“5000:1 odds to win the league. This was a team that wasn’t in the EPL two years ago, and then came close to being relegated last year. How can you compare that to anything? It’s incredible.”
For years the EPL has been dominated by the likes of Manchester United, which has won 13 championships, as well as Chelsea and Manchester City. Since 1995, those three clubs and Arsenal have accounted for every league championship.
“What is so impressive to me is two things, that Leicester City spends so much less on their roster than all the other EPL teams, but were still able to be so successful this year,” Hun School girls soccer coach Joanna Hallac said, “And it’s not like other sports where you upset a better team in a one game championship or in a few games of a championship series, but the fact that they had to sustain this throughout the course of a 10-month season, week after week.
“It is just truly amazing and what I think makes this one of the most unbelievable and special moments in sports history.”
Leicester City’s ascent to the title was remarkable in that the club has not been part of the Premier League from 2004 until making its way back in 2014. Two years later they captured the championship.
“I think the Leicester story has been one that inspires athletes everywhere,” West Windsor-Plainsboro North boys soccer coach Trevor Warner said. “Now any team or competitor can go in thinking they have a chance, and that even when the odds, literally, are against you, you can achieve great things.
“They showed no fear, and I enjoyed watching their cool and determined approach. Watching them celebrate their title with each other in Jamie Vardy’s kitchen was awesome!”
WW-P South boys soccer coach Bryan Fisher concurred with the thoughts of Warner.
“When you work hard, play with great passion and play for the name on the front of the uniform truly anything is possible,” Fisher said. “I believe it’s a great lesson for all of us. Cheers to the champs!”
And when a 5,000-1 shot wins a championship, it just goes to show that anyone has a shot once the games begin.
“It’s refreshing to see a club like Leicester, whose combined team salary is 17th in the league, top all the clubs whose egomaniacal owners have deep pockets and a will to spend it all — Man United, Chelsea, Manchester City, Arsenal,” Princeton High boys coach Wayne Sutcliffe said. “This gives clubs like Leicester a reason to believe that anything is possible with belief, player performance and clever coaching.”
Added Rider University men’s soccer coach Charlie Inverso: “Something like this is good for the sport. It shows anything is possible. The EPL is such great soccer to watch. Even if you get a chance to just go as a casual fan to Europe and see a game, the atmosphere is like nothing you’ll ever see when you go to a professional sporting event.”  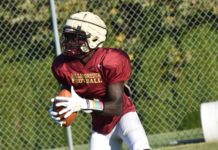