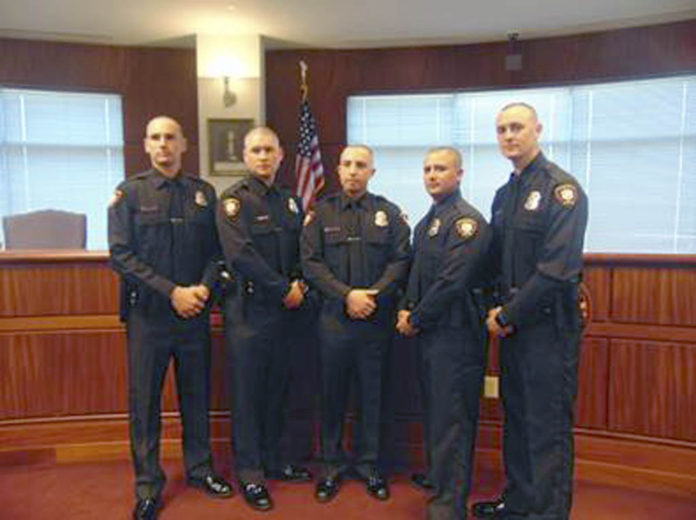 Patrick McGeehan, 23, is a lifelong resident of Colonia. He graduated from Colonia High School in 2010. Afterward, he attended Stockton University where he earned a Bachelor of Arts degree in criminal justice. He was previously employed by Weldon Concrete in Westfield.

Adam Kazawic, 23, is a resident of Fords. He is a 2011 graduate of Bishop Ahr High School in Edison. He earned a bachelor’s degree in accounting from Kean University. Prior to becoming a Woodbridge police officer, he was a mechanic for Garry’s Precision Automotive Repair in Fords.

Justin Nerney, 27, is a resident of Woodridge. He is a 2006 graduate of Woodbridge High School. He has earned more than 80 college credits from Johnson & Wales University in Rhode Island and is close to securing his bachelor’s degree. He previously worked as a service advisor at Richard Lucas Chevrolet in Avenel.

Jeffrey Schott, 24, is a resident of Colonia. He graduated from Colonia High School in 2009. Prior to becoming an officer, Schott worked for the Woodbridge Police Department as a 911 telecommunications operator. He was also an EMT with various first aid squads within the township.

Jake Fasano, 23, is a resident of Woodbridge and a 2011 graduate of Woodbridge High School. He earned a bachelor’s degree from Rutgers University where he majored in psychology. Prior to joining the WPD, Fasano served as a Woodbridge auxiliary police officer.

The officers completed the state-mandated six-month police training program at the Monmouth County Police Training Academy and will immediately take up assignments in the Radio Patrol Division, according to a statement prepared by the Mayor’s Office of Communication.

“The public safety mission of the WPD is our most important priority. As a result of our commitment to public safety, combined with the increased assignment of uniformed officers to street patrol, the WPD continues to maintain police ranks at maximum staffing levels – 198 sworn officers – to effectively protect public safety,” Mayor John E. McCormac said.