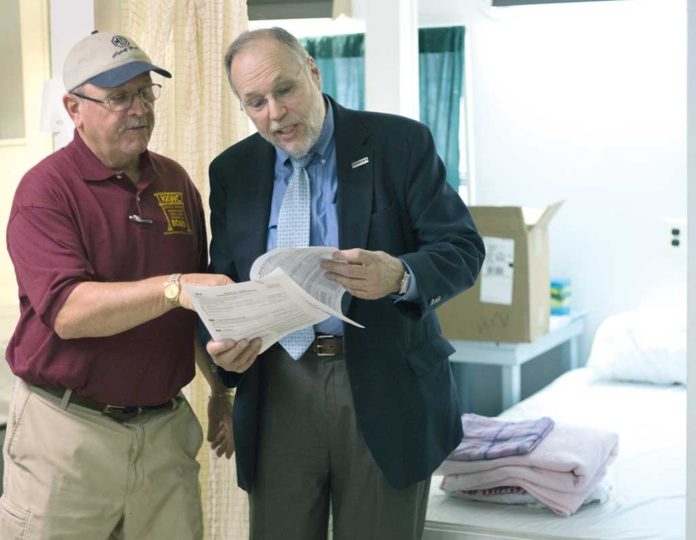 EDISON — For some, the John E. Toolan Kiddie Keep Well Camp is a place for camaraderie, growth and support when needed.

Crystal Owens, of Carteret, said she has attended the camp since she was 6 years old.

Owens said her mom was called to pick her up.

“It was the second day and she didn’t come,” she recalled.

However, by the third day, Owens said she actually wanted to be at the camp, and ever since then, every summer Kiddie Keep Well Camp has been home.

The camp, a nonprofit corporation and an American Camp Association Accredited Camp, was founded in 1924 and has served thousands of Middlesex County children and their families at no charge.

It sits on 13 acres in Roosevelt Park, Edison, and has nine cabins.

The children, ages 7-13, receive medical and dental exams, proper nutrition and dental hygiene education at no cost to the families and enjoy what summer camp is all about — swimming, arts and crafts, music, games, drama and other indoor and outdoor activities such as yoga, fitness activities and a campfire with s’mores.

During camp sessions, the Middlesex County Sheriff’s Department gives a presentation on bullying and cyberbullying.

Last year, some 683 children attended the camp — 165 per 11-day sessions. There are four sessions throughout the summer.

The children are referred to the camp by school nurses, guidance counselors, principals and the New Jersey Department of Youth and Family Services.

The children receive three hot meals a day with snacks. On July 4, a barbecue is held and U.S. Marines visit.

In 2015, the camp began its $300,000 campaign to “Raise the Roof” on the camp’s health center, which was placed in its location without a foundation around 1947, causing the building to tilt over the years.

“The building was transported here,” said Cindy Robertson, executive director of the camp.

Ron Goldfarb, a member of the board of directors, said the health center is the “heart and lungs” of what they do. He noted that the health center for most of the children who come to the camp might provide them the only opportunity to visit a doctor.

Thomas Tighe, who also serves on the board of directors, said the campaign is to upgrade the health center, which would cost $150,000 and the rest of the funds would be put towards maintenance of the camp’s other buildings.

The current health center has five beds separated by curtains and living quarters for an around-the-clock nurse.

“The space is just not adequate,” said Goldfarb, who said the funds would go toward changing the curtains to cubicles, adding a small kitchen, putting a foundation to the building and making a space for recordkeeping and storage. “The building only works because we make it work.”

Goldfarb said all the buildings at the camp have been redone at one point except for the health center.

A fundraising barbecue and groundbreaking of the project will be held between 1-4 p.m. June 25. The first camp session began June 22.

Camp officials said they have support from all the municipalities in the county, the Middlesex County Board of Chosen Freeholders and the Robert Wood Johnson Foundation as well as Woodbridge Community Development Block Grant funds. The camp also receives help from local Girl and Boy Scout groups. There have been 30 or so Eagle Scout projects done at the camp.

Goldfarb said they are always looking for grants and have a grant writer on staff.

Robertson said since she took over as executive director of the camp 12 years ago, she made a lot of changes, including encouraging campers who age out to enter the counselor-in-training program at age 13 or 14 to ultimately become a counselor when they turn 18.

“We have 22 staff members this year who have previously been camp members,” she said.

Carmel Coleman, 16, of Metuchen, said she has attended the camp since she was 6 years old and is now a junior counselor.

“It’s been a big part of my life every summer,” she said.

Coleman said at one point her mom was suffering from stage four breast cancer, and she was signed up for a four-session gateway program at the camp, which helped her get through what she was experiencing at home.

Robert Cody, 18, of New Brunswick, said he came to the camp when he was a teenager and wanted to become a counselor to give back to the community.

Last year, he said he followed his dreams into the fashion world and moved to Los Angeles, California, and got a job at Vogue.

“I told them about the awesome camp that has been like family to me back at home, and they were really understanding to have me come back and work as a counselor this summer,” said Cody, who said the camp has inspired him to one day open a nonprofit camp for those wanting to enter the fashion field.

Owens said the camp has helped her grow and find her way from wanting to become a singer at 6 years old to someday directing a camp just like Kiddie Keep Well Camp.

“I told Cindy when the camp is [even older], I want to buy it,” she said with a smile, adding that the camp has also inspired her to become a pediatrician.

Robertson said she has had 300 or so campers transition to counselors over the years.

The Kiddie Keep Well Camp also has a Senior Camp that began in 1983. There are three five-day week sessions in June, late August and early September, which are focused on health and wellness and support socialization among seniors as they engage in healthy and enjoyable activities.

There are also weekend programs throughout the winter and spring, which serve as a good respite away from home for family members.