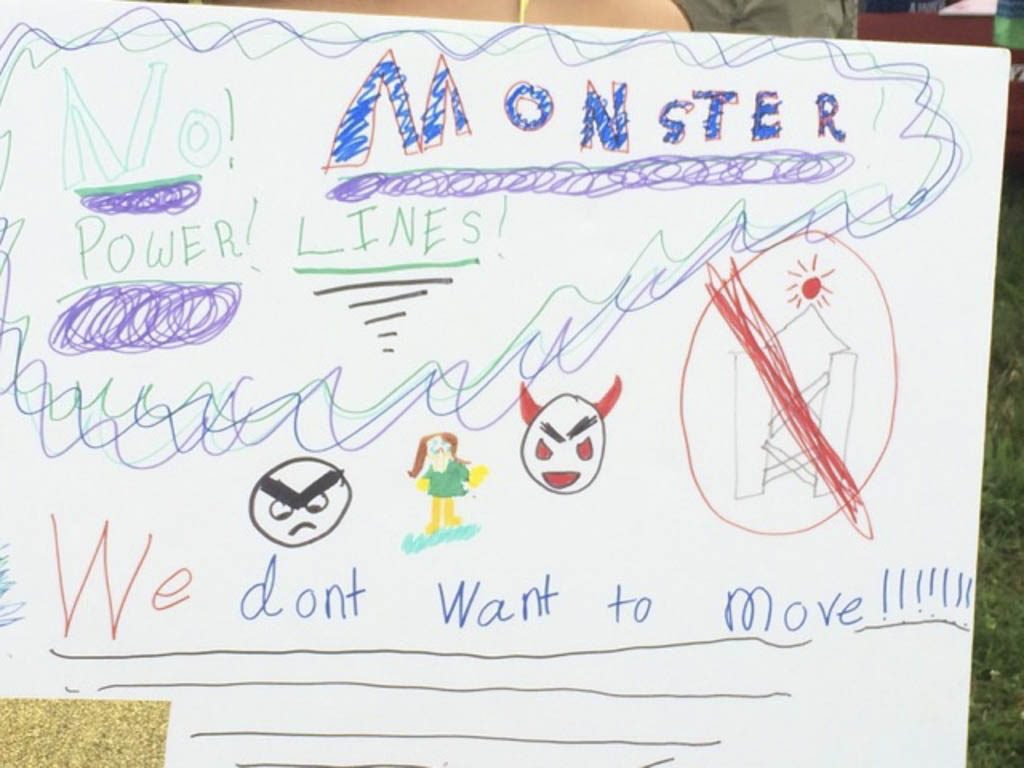 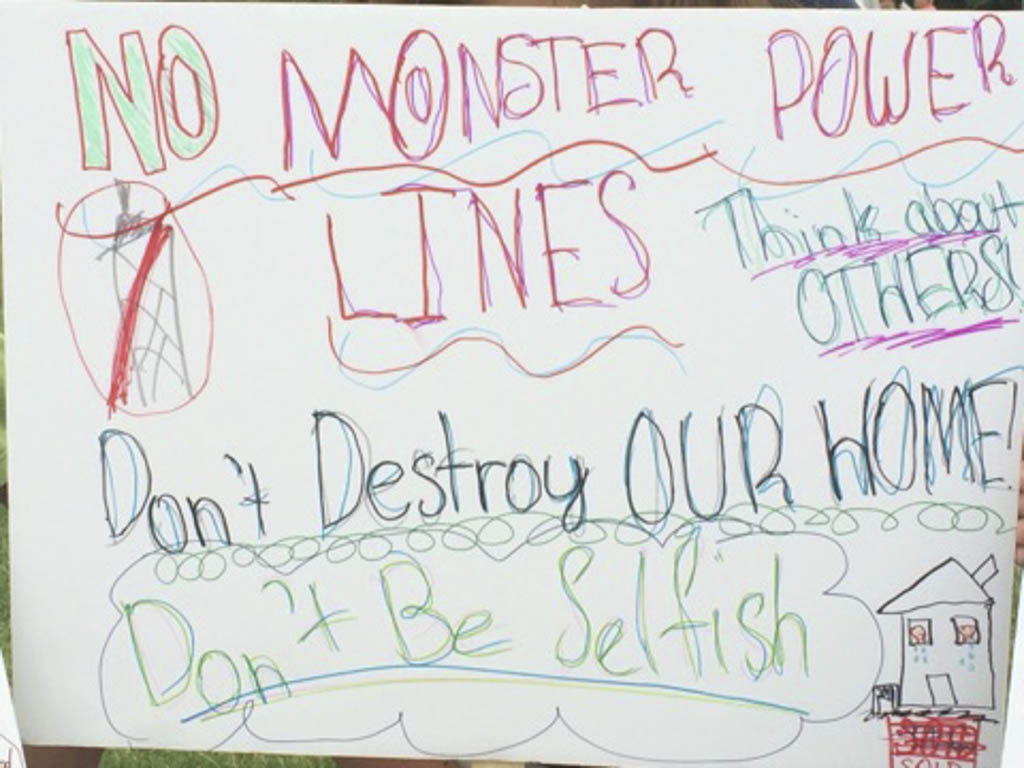 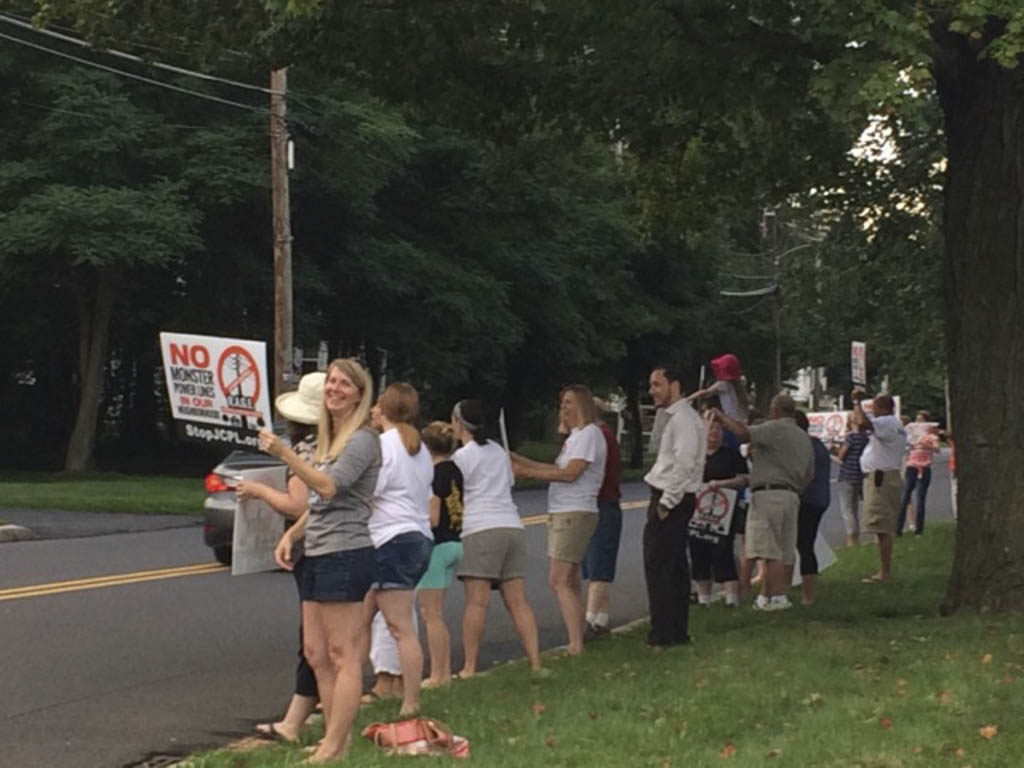 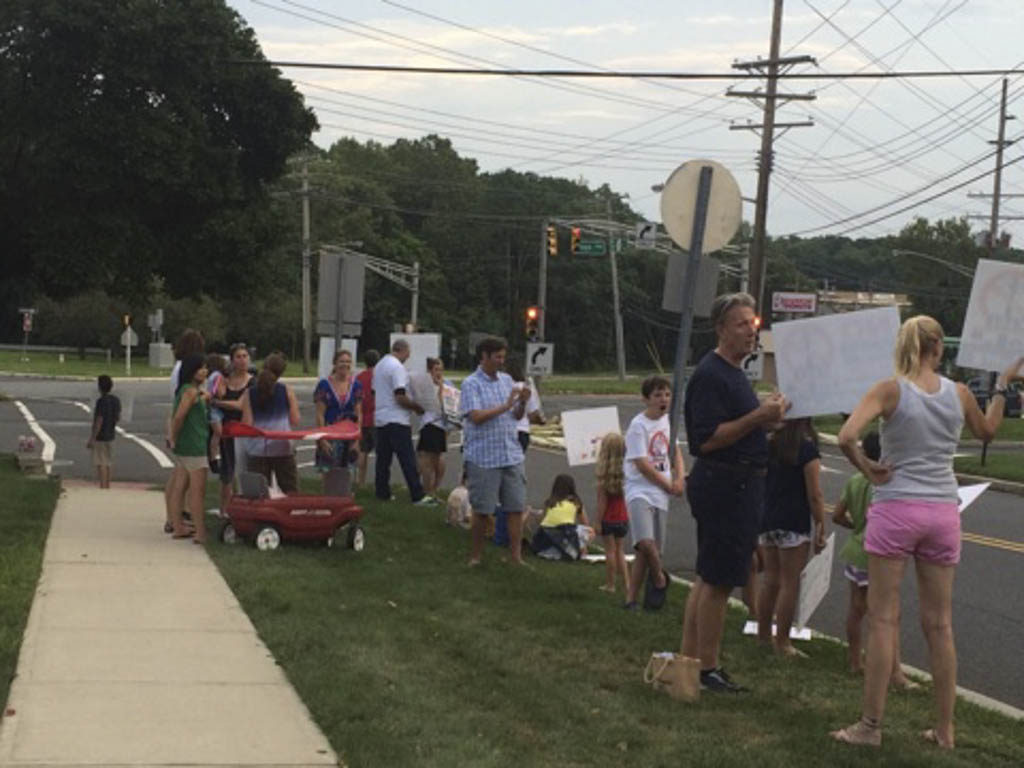 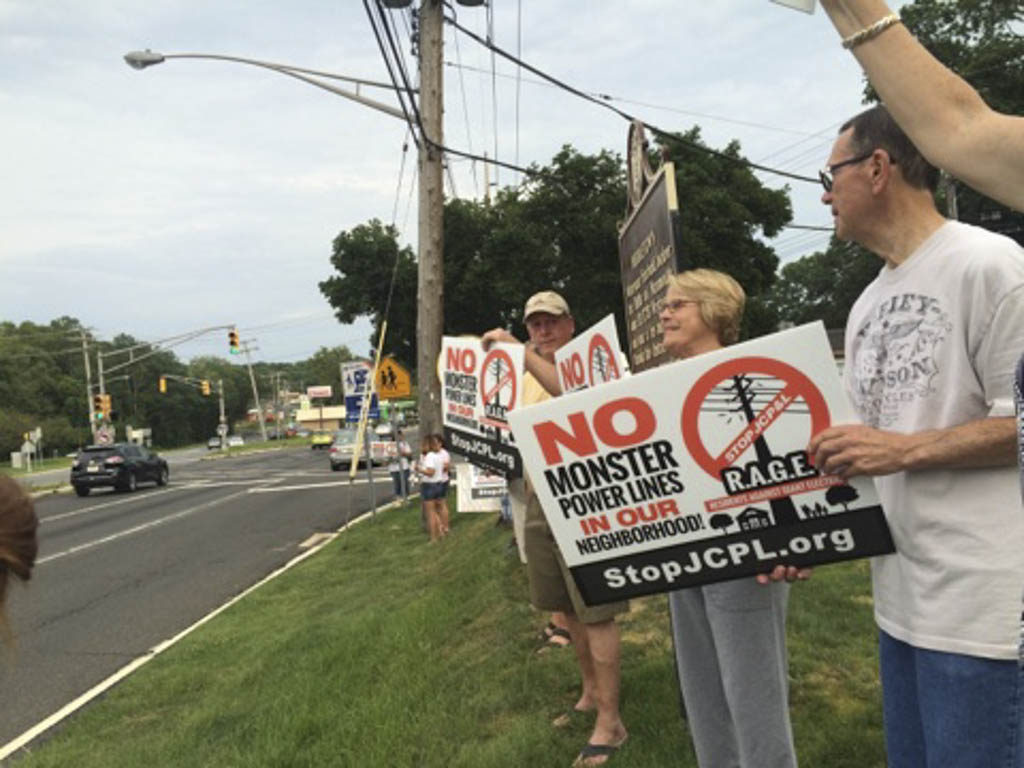 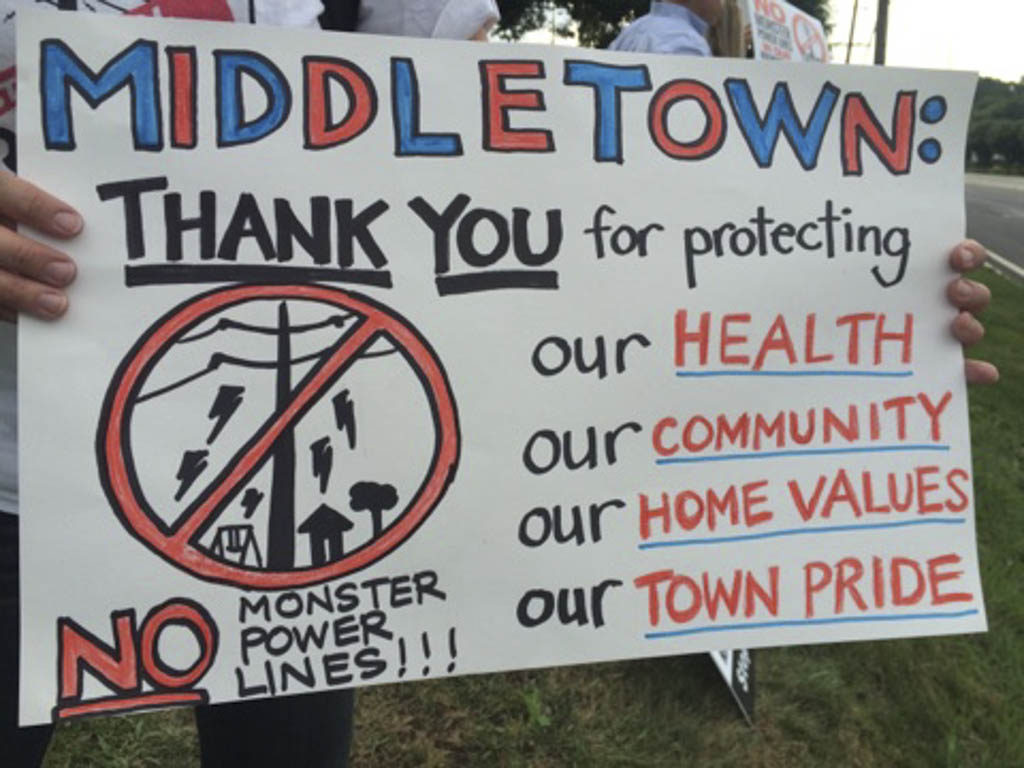 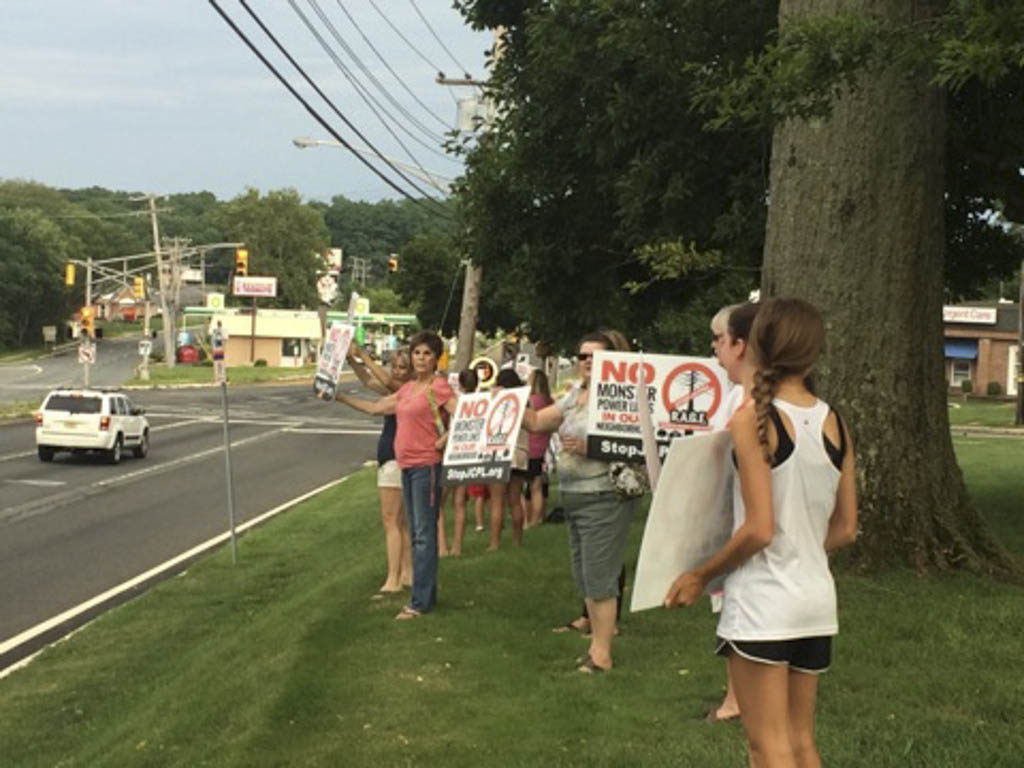 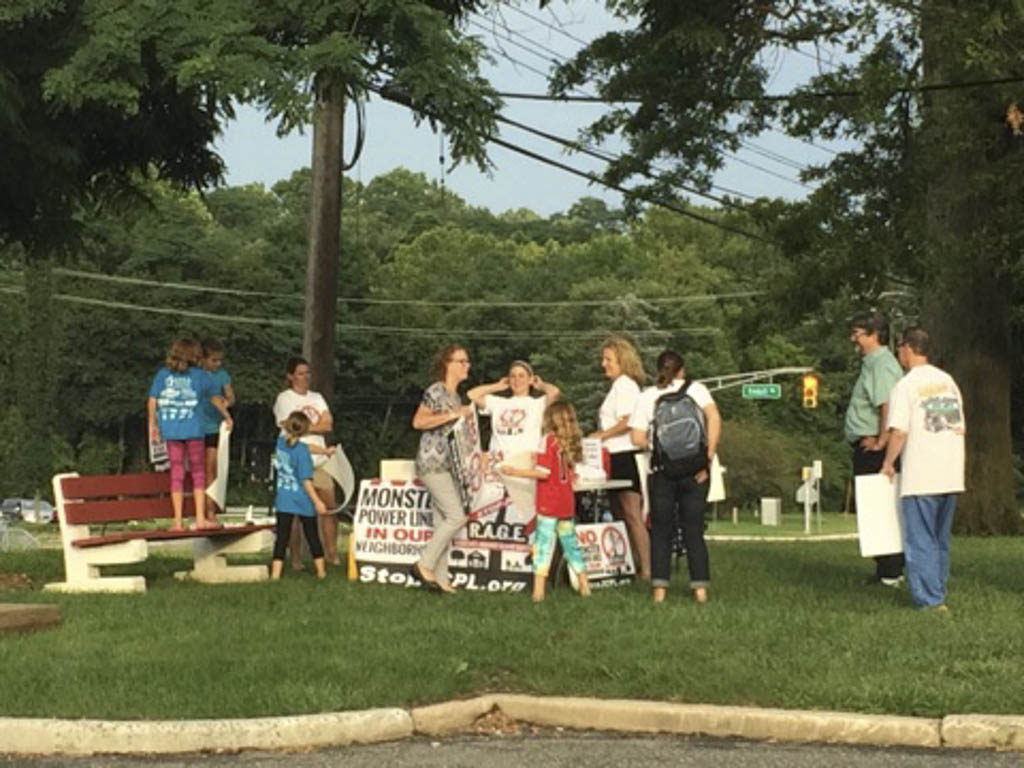 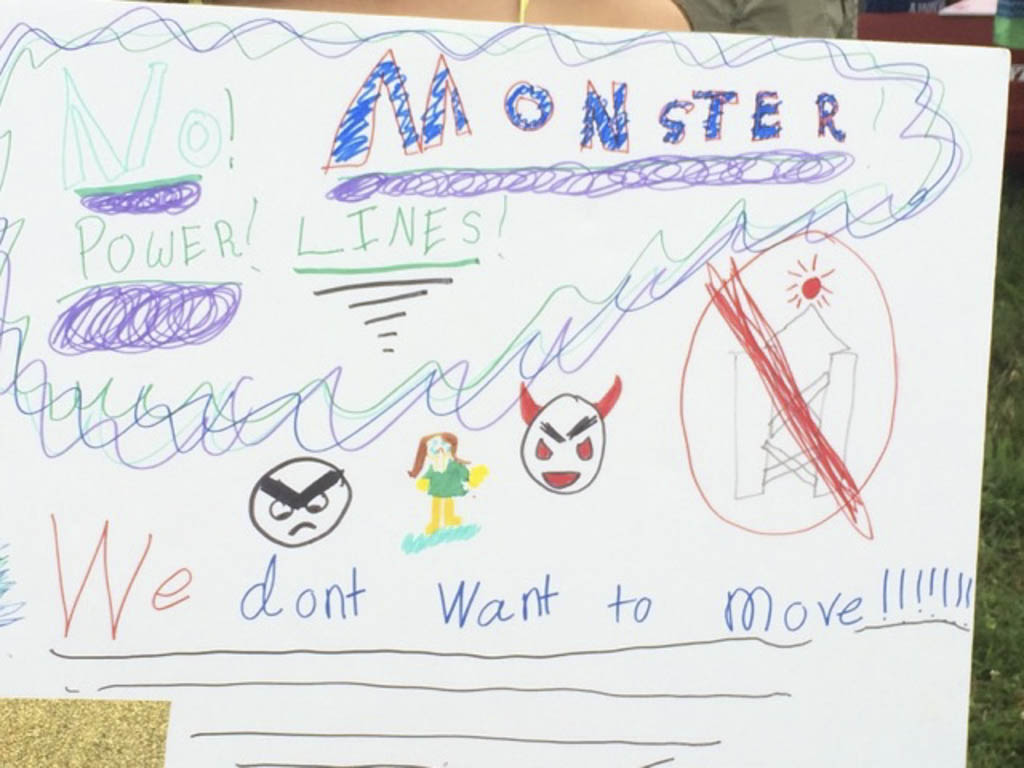 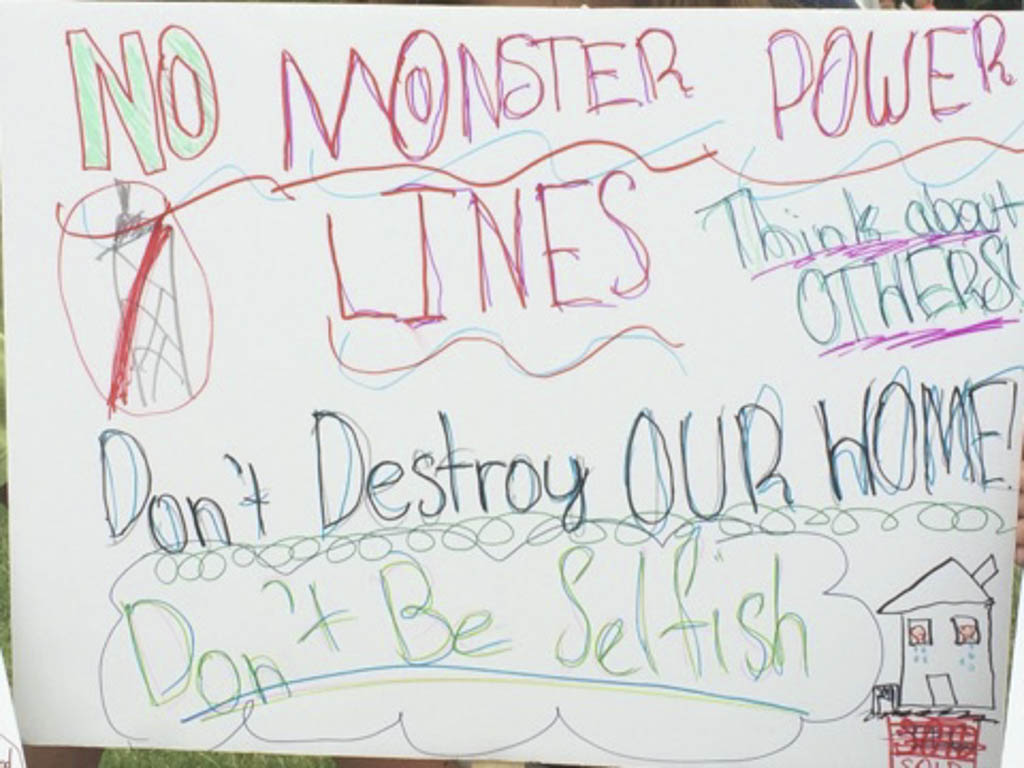 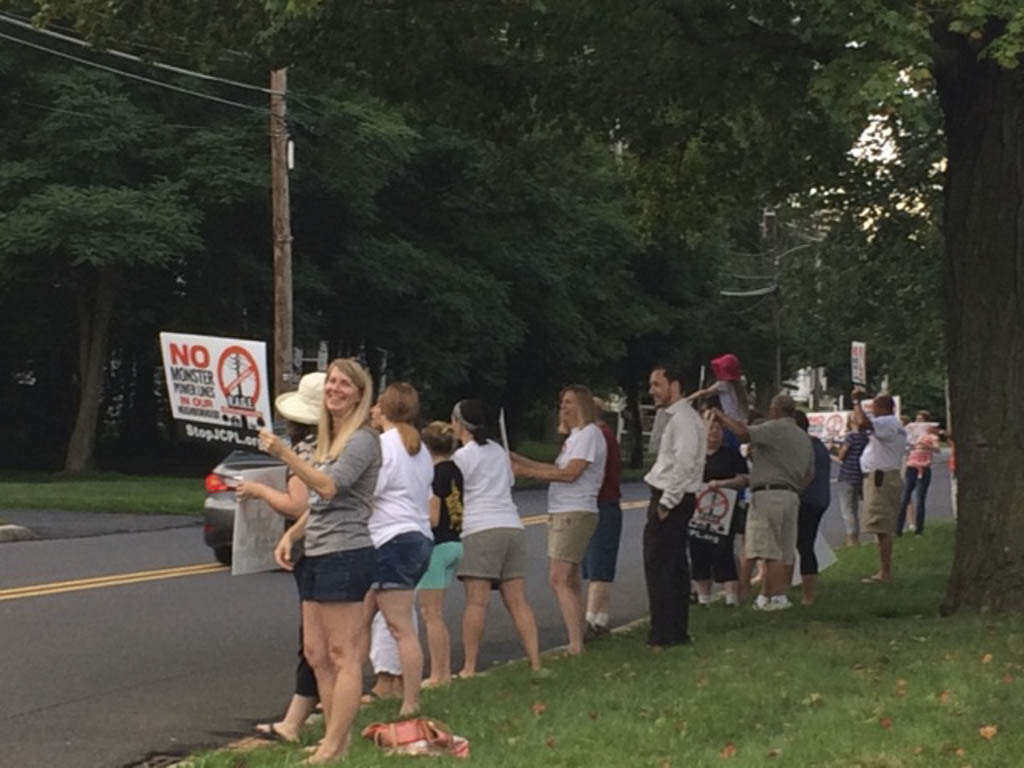 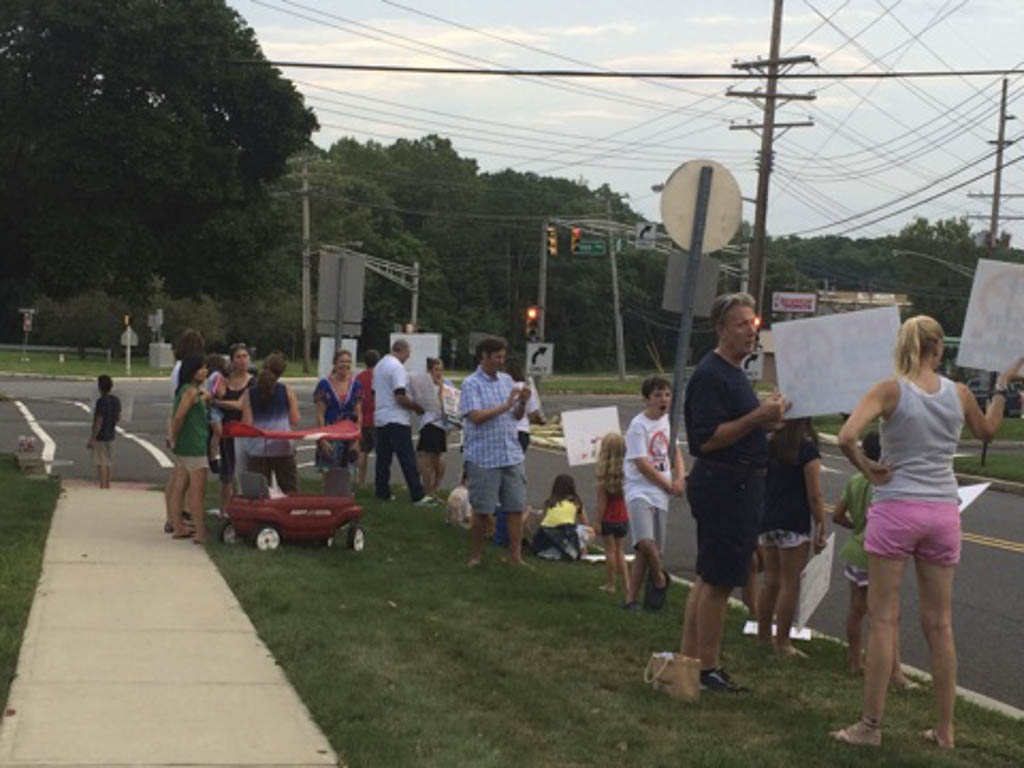 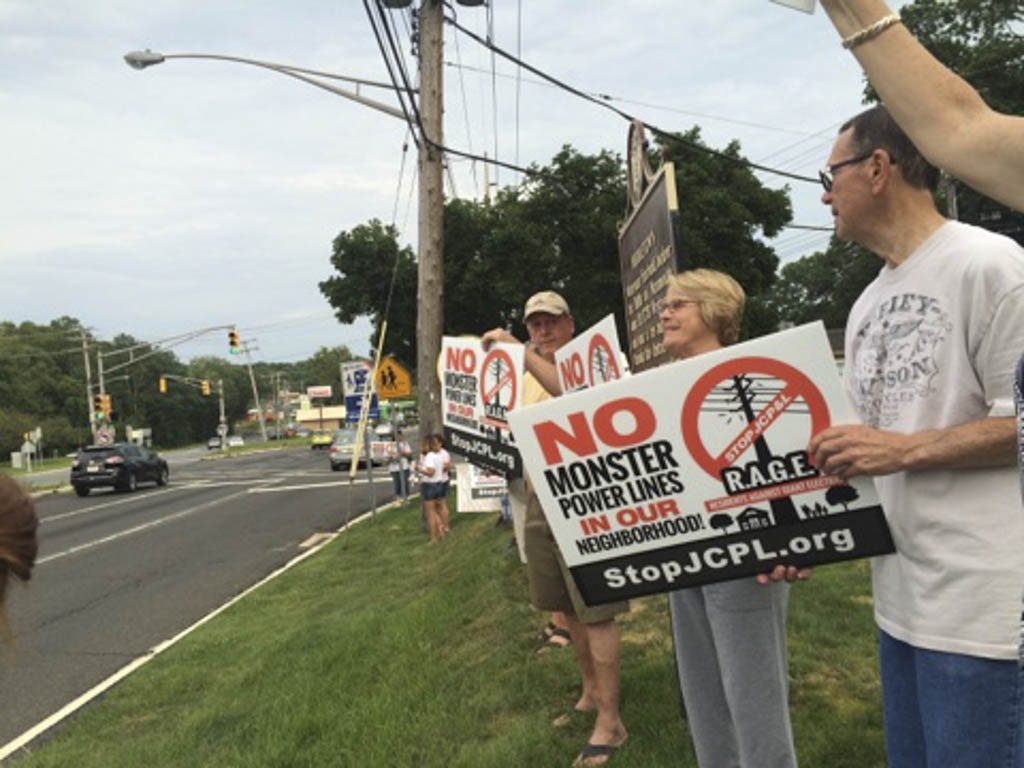 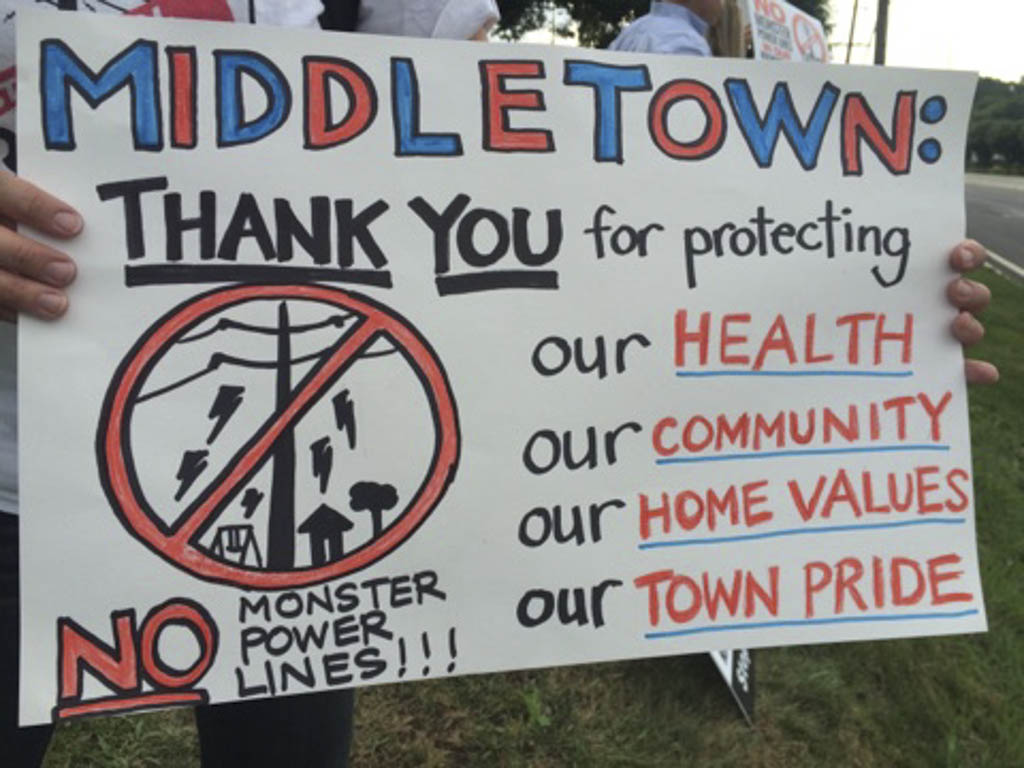 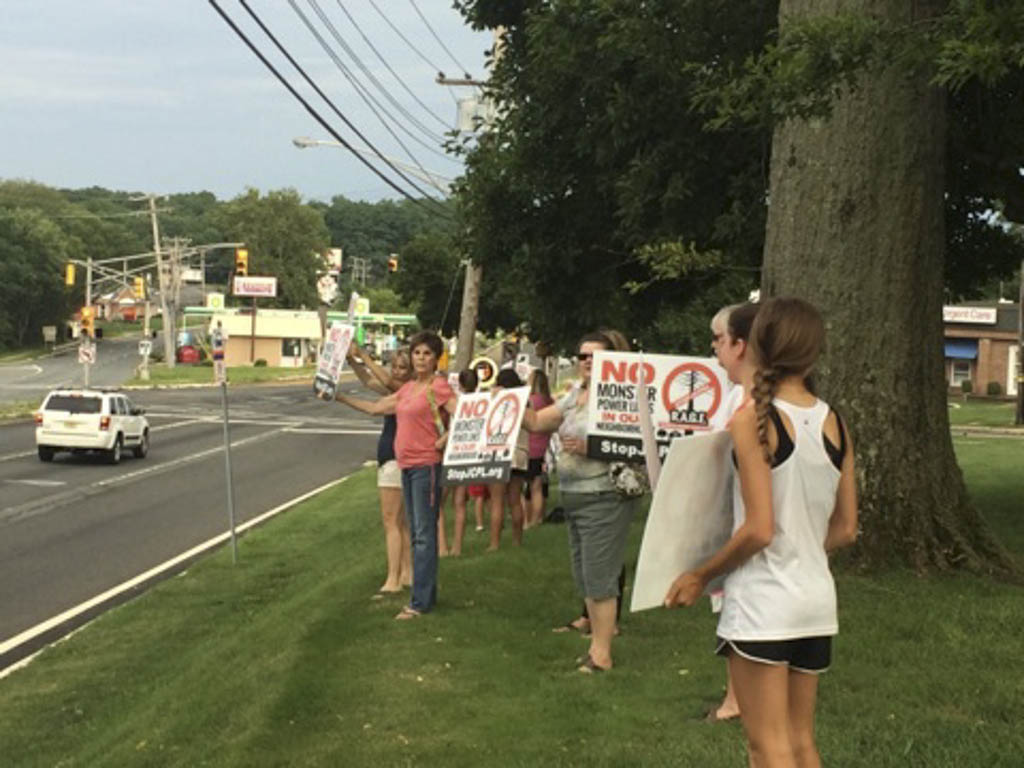 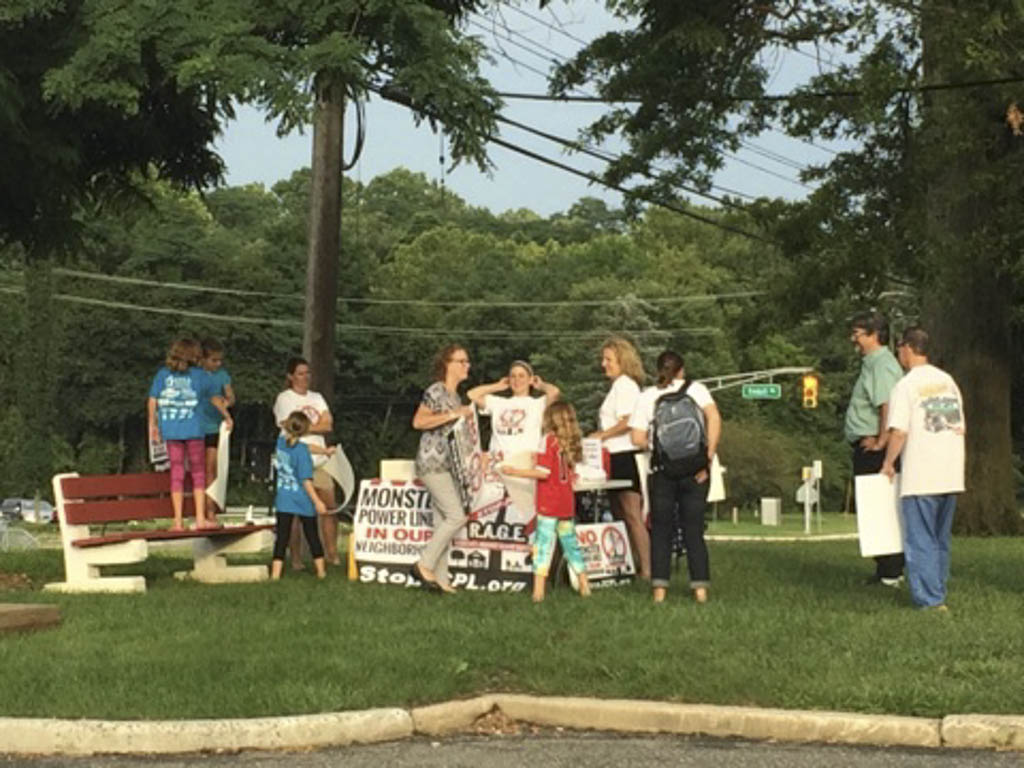 MIDDLETOWN — The Township Committee has unanimously passed a resolution “expressing significant concern regarding the need for and impact” of JCP&L’s Monmouth County Reliability Project.

The transmission line would begin at a substation in Aberdeen and would follow the New Jersey Transit corridor right-of-way through Hazlet, Holmdel and Middletown before ending at the substation in Red Bank.

An hour before the 8 p.m. meeting on July 18, members of Residents Against Giant Electric (RAGE), a group aimed at educating residents about the impacts the project could bring and garnering support to help prevent the project from moving forward, gathered outside Town Hall on Kings Highway to host a peaceful demonstration and show thanks to the governing body for seeing the project as an important issue for residents.

“The rally was a great success,” said Andrew Clark of RAGE. “It was very positive. There was lots of energy and I think we definitely achieved our two goals, which were to thank the township for passing the resolution and spreading awareness to community members driving by.”

At least 100 individuals, including RAGE members and community members such as children, parents and concerned residents, held handmade or printed signs urging others to join the fight to stop the JCP&L project.

Many individuals driving along the Route 35 corridor and along Kings Highway by Town Hall honked or gave a thumbs up as a sign of support.

“We’re going to continue to spread awareness, I think there are a lot of people aware, but not enough, so we need to continue to spread our message and we also need to acquire more support,” Clark said. “We’re in the process of contacting local politicians, state officials and acquiring their support in opposition.”

Following the unanimous decision to approve the resolution, members of the governing body took a moment to share thoughts and give credit to those taking an interest in what happens in their home community.

“I think this resolution crystallizes what the Township Committee’s feelings are on the matter,” said Committeewoman Stephanie C. Murray. “I commend the mayor and deputy mayor for being great representatives of the Township Committee and taking the lead on this and really being trailblazers on this.”

Murray also commended RAGE for taking a stand and being involved.

“I really feel like it’s been a long time since I’ve seen a group of people raise awareness in such a way,” she said. “Whenever situations like this [arise], there are a lot of opportunities that pop up out the woodwork, and I think this group has done a great job turning down that noise and sticking to what’s important and really trying to make sure we [effectively] make a change.”

Mayor Gerard Scharfenberger also commended those individuals speaking out about the project and investing the time to truly understand what is going on in the community.

According to the passed resolution, the governing body believes that “based on the information presented to date, the need for this project is questionable, particularly when weighed against the significant and disproportionate negative impact it will have on Middletown and its residents” such as on real estate values, which they said would “decrease the tax base of the township” and on the Middletown Village Historic District.

“I know the mayor and I, especially the mayor, have been very vocal in attending different meetings and trying to get all the due diligence we possibly can,” said Deputy Mayor Anthony Fiore.

“We realize this is a fluid situation, we realize this is a complicated and complex situation for the municipality, for our residents … and we thoroughly realize that there is a lot we need to learn and we are steadfast in our commitment to meet with all the professionals we possibly can … [and see] what we can do from our perspective.

The resolution states the governing body believes “less intrusive alternatives have not been given sufficient consideration prior to dusting off failed 30-year-old plans for this project” and “encourages “JCP&L to more fully consider less detrimental means to increase the reliability of its transmission services.”

“We have a special quality of life here in Middletown and I think … fighting this is what will keep the quality of life that we appreciate,” said Committeeman Stephen Massell.

“If anyone has read it or not, it is a two-page resolution, it contains a lot of ‘whereas’ and ‘now therefore be it resolved,’ so once you get through all that stuff it pretty much says the governing body of the township of Middletown doesn’t like the way the proposal has been made and its effect on the residents,” he said. “This governing body will do everything in its power to protect the residents of Middletown as a whole.

“We want you to understand we don’t like the project the way it is and if it happens, we want it modified to make sure the township residents are protected.”

Two residents took a moment towards the end of the meeting to thank the governing body for their support of residents and opposition to the project.

“I just want to say ‘thank you’ mayor and Township Committee for listening to our concerns and taking a stand tonight by passing [the resolution],” said Rachael Kanapka. “If this project were to go through as proposed, the negative impact to Middletown and its residents would be tremendous [and] I applaud the Township Committee’s willingness to get involved.

Resident Bernice Curto mentioned the proposed transmission line would only be 70 feet from her and her husband’s house.

“We are literally sick over this project,” she said. “What about our American dream? We work hard, obey the laws, pay taxes, [are] upstanding members of the community, invest [our] life savings in a dream home — how can that all be taken away so easily by a utility company?

“Thank you for signing the unanimous resolution. Please [continue to] listen to the residents and families who need to be heard and comfort their fears.

“Please [continue to] be leaders in this fight and support us by walking the walk and fighting the fight both for us and with us [and] please do whatever it takes to defeat this.”