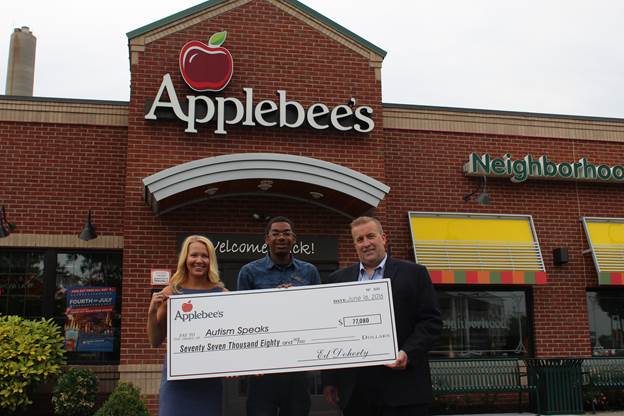 Representatives of Applebee’s Neighborhood Grill & Bar present a check for $77,080 to Autism Speaks, whose mission is to change the future for all who struggle with an autism spectrum disorder.

In support of Autism Awareness Month, Applebee’s locations owned and operated by Doherty Enterprises in New Jersey, Long Island, Florida and Georgia, donated a portion of the proceeds from the sale of “blue” drinks – including Blue Skyy Electric Lemonade and Blue Moon draft beer – as well as paper puzzle pieces.

Applebee’s locations in New Jersey raised a total of $28,293, which includes matching donations from Skyy Vodka and Miller Coors, as well as the proceeds from flapjack fundraisers held at its Flemington, Hillsborough, Manchester, Parsippany, Tinton Falls, Toms River and Woodbridge restaurants.

Applebee’s supports its neighbors, providing local organizations with a platform to promote their community and charity initiatives. The company offers its restaurants as a facility during non-operating hours to help local organizations raise money through sales of its breakfast plates.

Autism Speaks is the world’s leading autism science and advocacy organization. It is dedicated to funding research into the causes, prevention, treatments and a cure for autism; increasing awareness of autism spectrum disorders; and advocating for the needs of individuals with autism and their families.

Autism Speaks was founded in February of 2005 by Suzanne and Bob Wright, the grandparents of a child with autism. Since its inception, Autism Speaks has committed more than $570 million to its mission, the majority in science and medical research. On the global front, Autism Speaks has established partnerships in more than 70 countries on five continents to foster international research, services and awareness. To learn more about Autism Speaks, please visit www.AutismSpeaks.org. 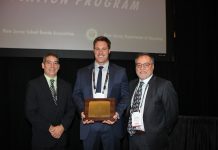 Jackson resident dies on the job at local business