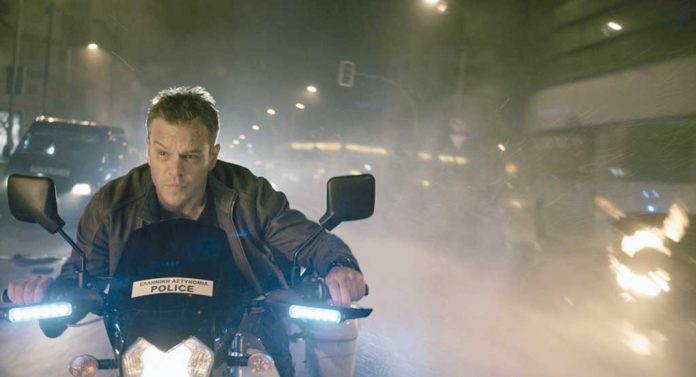 It’s been nine years since Matt Damon did a Bourne film. Now Damon and director Paul Greengrass reunite for the new film Jason Bourne, to reenergize the franchise.

For those of you who haven’t seen the franchise’s previous films, here’s a bit of the backstory. Jason Bourne (Damon) is a weapon for the U.S. government. He has been called upon for some of the most sensitive covert assignments and has an amazing skill set to carry them out. As we’ve progressed through the film series, we have seen Bourne regain memories that seemed buried forever and while he runs from the actions of his past, they always catch back up with him.

Fast forward to the current installment and we see the path that Bourne took to volunteering for the Treadstone program at the CIA. Bourne’s old friend Nicky (Julia Stiles), reaches out to him to share details of his life that he still does not remember. However, this meeting exposes Bourne’s location. He is back “on the grid” and becomes an immediate target for the CIA. Now he must run for his life while trying to exact appropriate revenge on those who would like nothing better than to eliminate him.

The chase is on and CIA agent Heather Lee (Alicia Vikander) takes the point. She will need to bring Bourne in or CIA director Robert Dewey (Tommy Lee Jones) will have him eliminated. The globetrotting adventure twists and turns to a final resolution on the Las Vegas Strip.

Bringing back the amazing combination of Matt Damon and Paul Greengrass was something this franchise needed. They collaborated earlier on 2004’s The Bourne Supremacy and 2007’s The Bourne Ultimatum. Greengrass once again transports viewers into the middle of his signature gritty, realistic action sequences to allow us to feel every punch. It’s that experience that has made Greengrass’ Bourne installments truly special.

Damon brings the cool and calculating Bourne to life in the same way he endeared himself to the fans of the franchise. His ability to do great things without needing long sequences of exposition is perfect. Alicia Vikander and Tommy Lee Jones are well cast in their new supporting roles.

Although the action sequences are solid (if over-the-top at times) and the casting works at reigniting the franchise, the script and plot leave something to be desired, especially by the standard we’ve come to expect. The plot holes at times seem gaping, and as you think about things, it is easy to question a number of the scenes in the film.

Despite the problems I had with portions of the plot and script, there were other scenes that were spot-on and thrilling. Those special scenes, coupled with the action and actors involved with this sequel, make Jason Bourne a thrilling film to enjoy in theaters everywhere. There’s no question — Bourne is back!

Brought to you by the publishers of TV Guide, the ultimate TV resource packed with celebrity news and commentary on what’s new and what’s good to watch. Get TV Guide at 88% off the cover price: call 800-866-1400 or visit tvguidemagazine.com. ©TV Guide 2016.

NEW THIS WEEK
Nine Lives
Rated: PG
Stars: Kevin Spacey, Jennifer Garner, Christopher Walken
Director: Barry Sonnenfeld
Tom Brand is an extremely successful businessman, but he has never been the best family man. While searching for a gift for his daughter, a mysterious man transfers him into the body of a cat named Mr. Fuzzypants. He has one week to reconnect with his family or he will remain a cat for the rest of his life.

Suicide Squad
Rated: PG-13
Starring: Will Smith, Jared Leto, Margot Robbie
Director: David Ayer
Assembling a team of the world’s most dangerous incarcerated supervillains seems like a good idea, right? That’s exactly what the government has decided to do. Enlisting this group of characters gives the government a team with a unique skill set to solve special problems, and if they fail, they are the perfect patsies — and expendable.