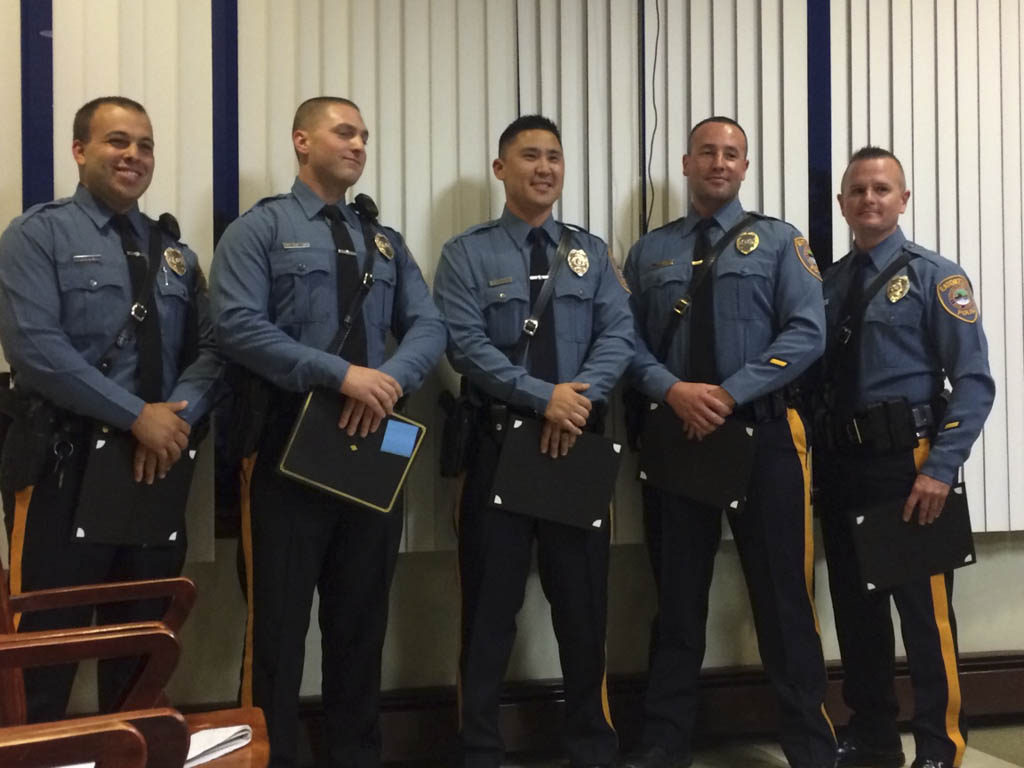 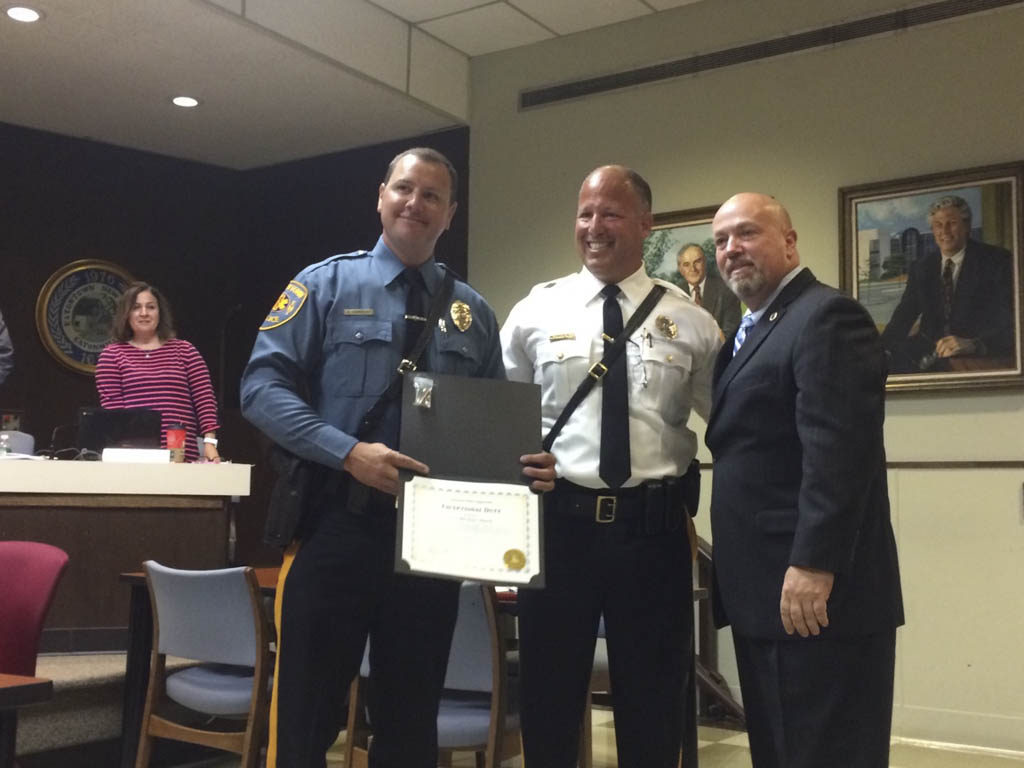 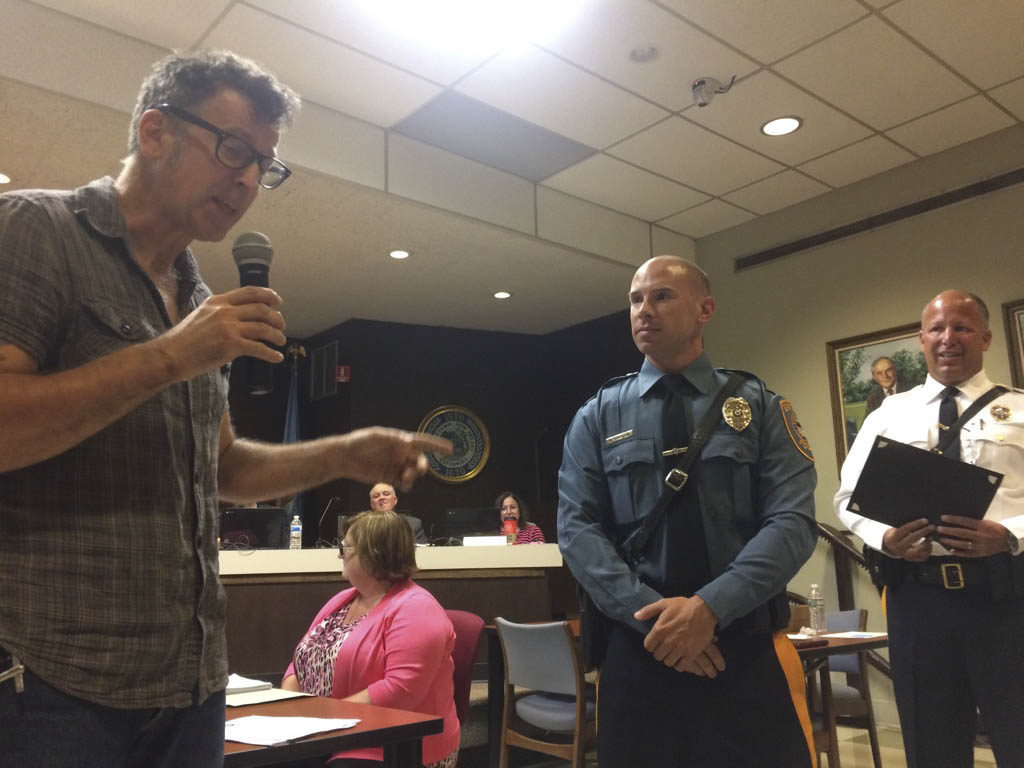 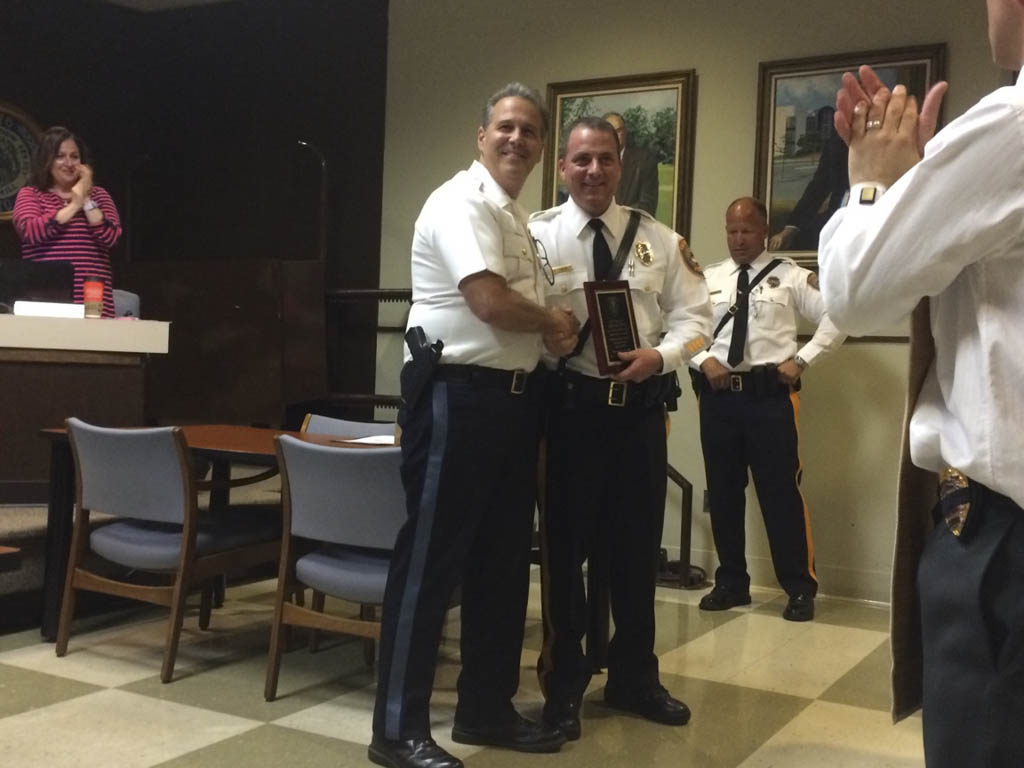 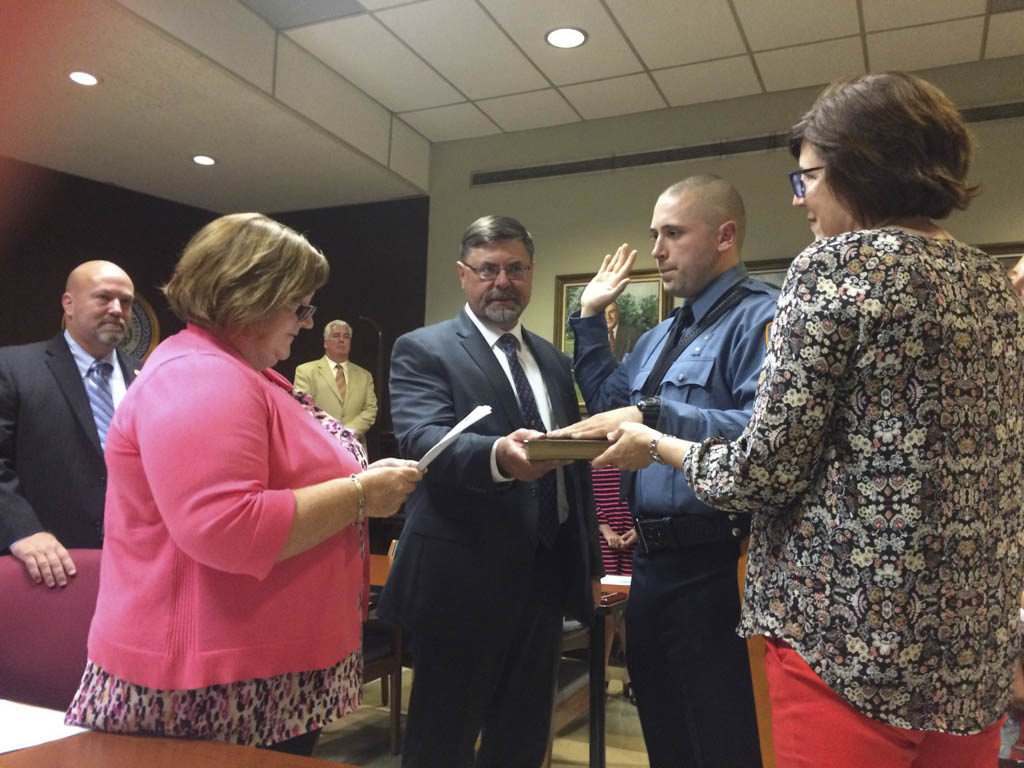 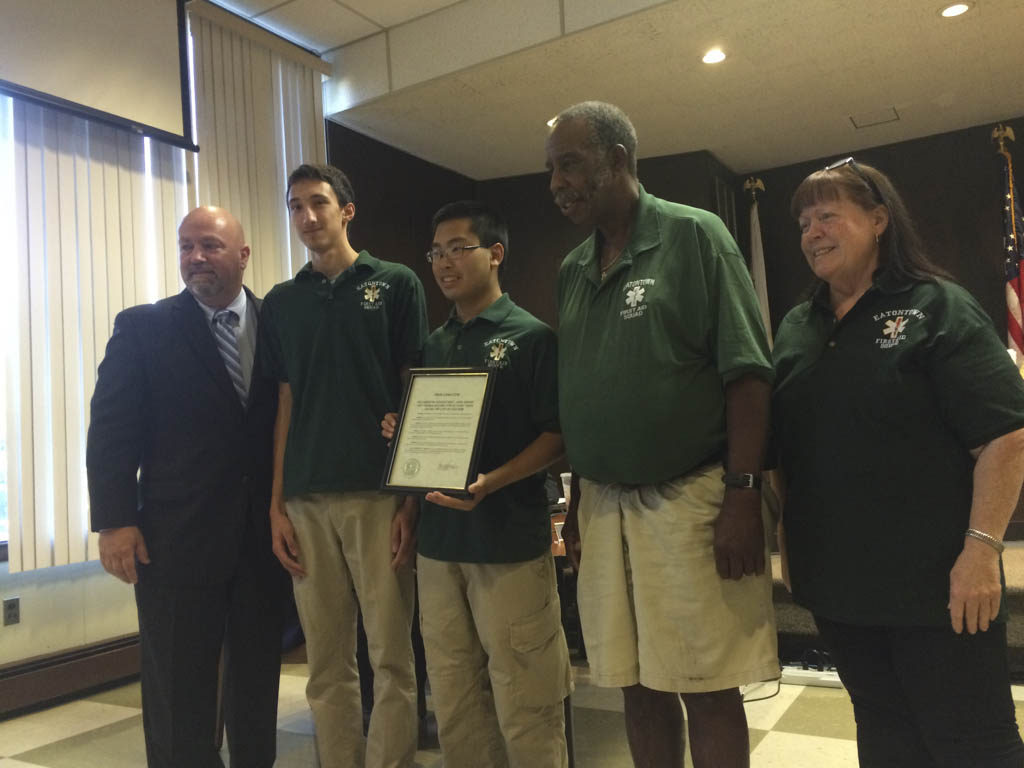 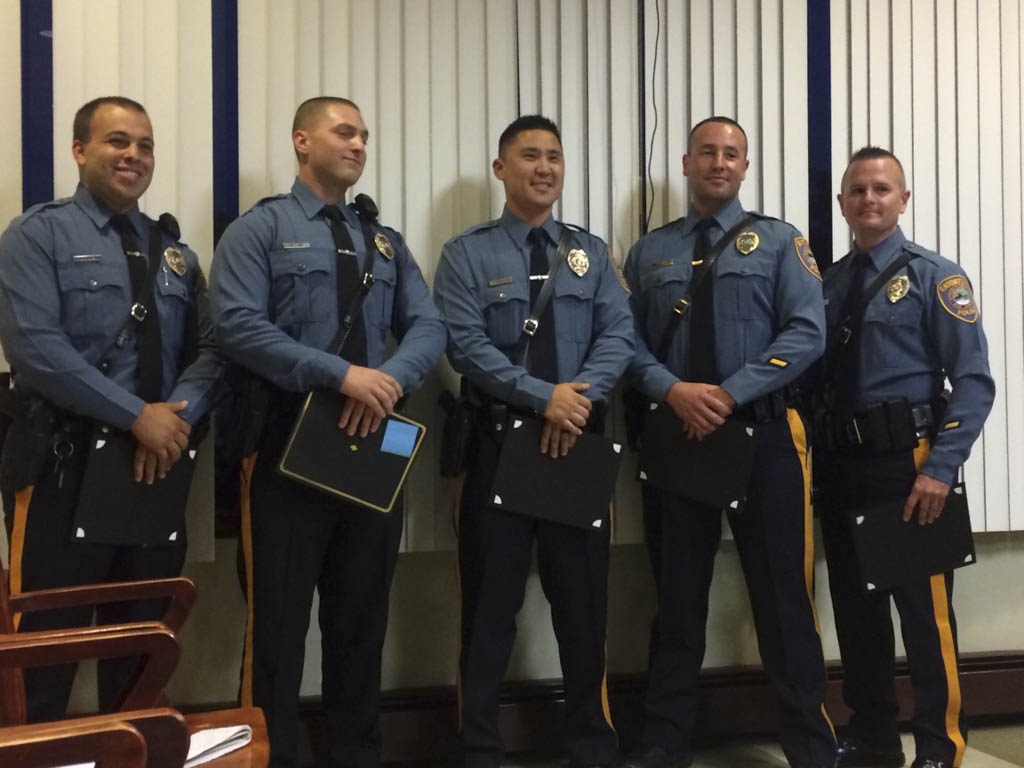 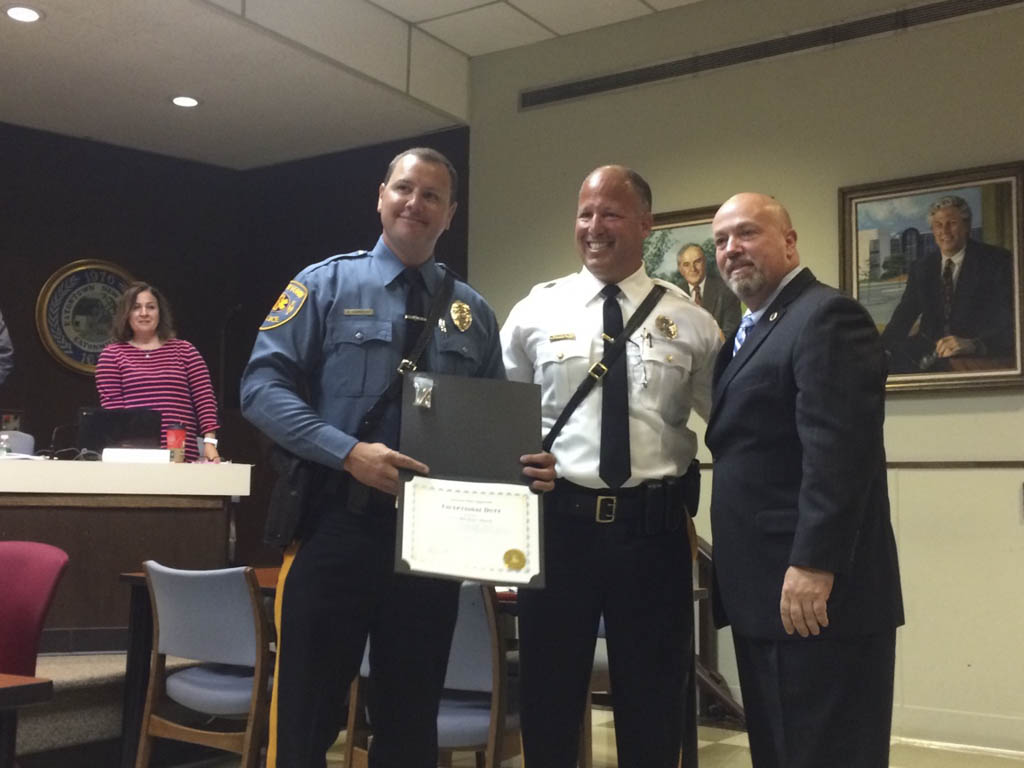 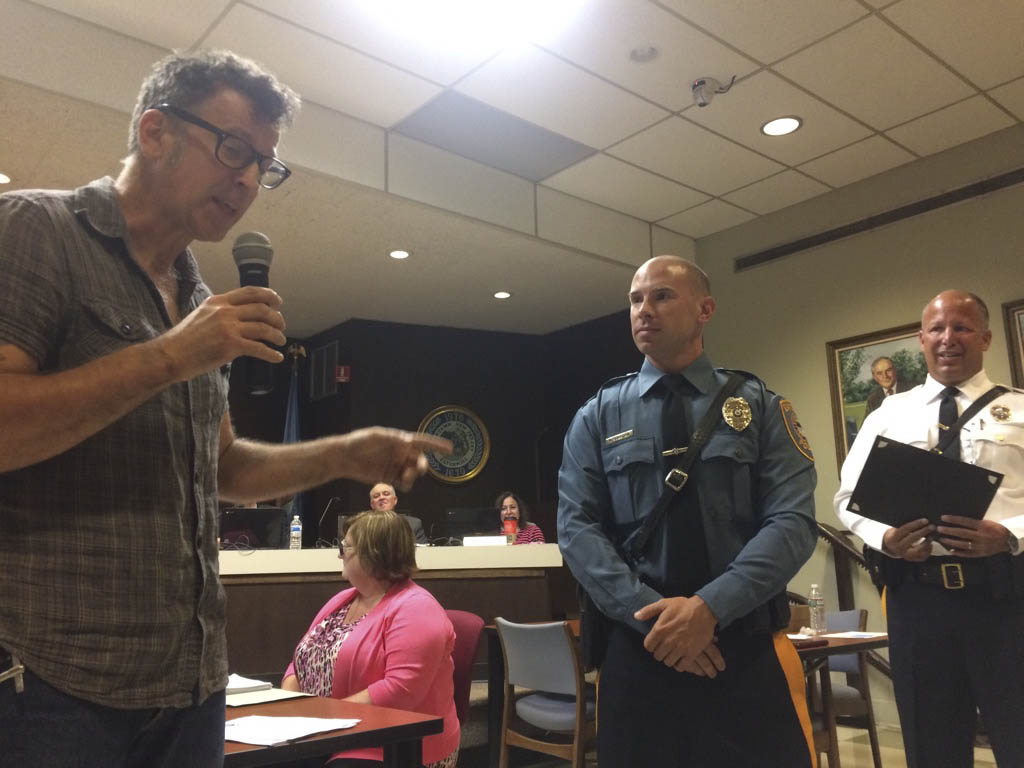 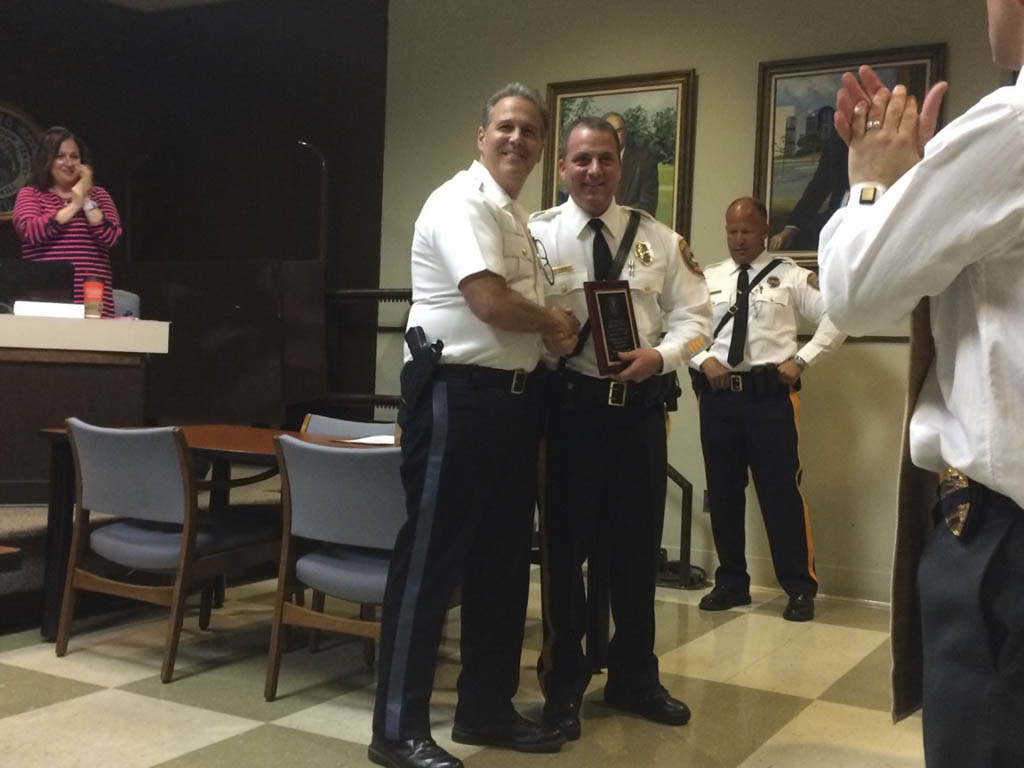 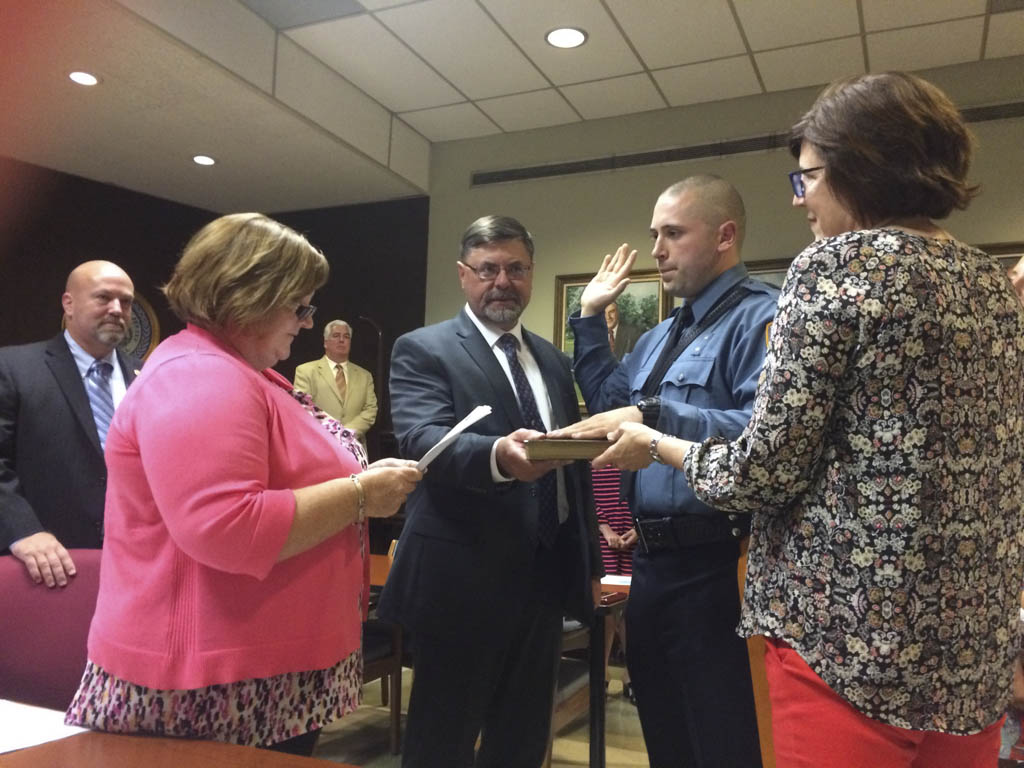 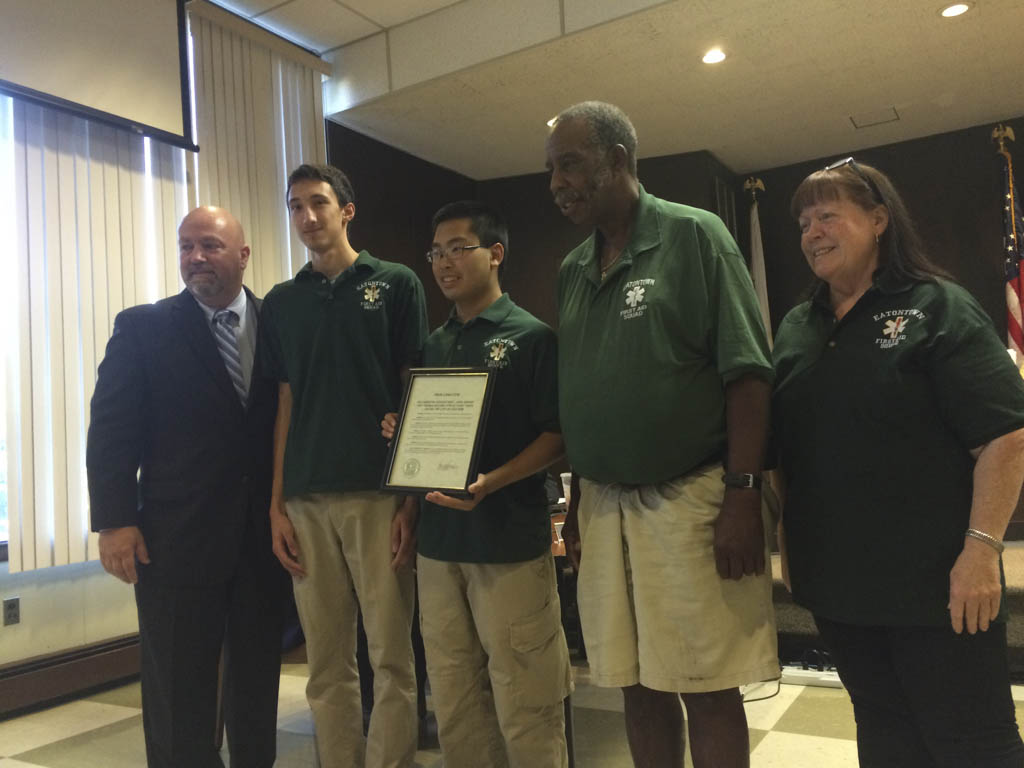 EATONTOWN — A recent Borough Council meeting featured local volunteers who were honored for their hard work and dedication in saving lives and making the community a better place to live.

“It’s always great here in the borough to have some great things that happen, especially from our volunteers,” said Mayor Dennis Connelly. “Saving a life, there can’t be anything better than that.”

“On Saturday, June 4, Eatontown resident Ken Christel was in need of immediate medical assistance at his residence,” Connelly said. “First aiders Harold ‘Lucky’ West, John Barney and Thomas Notaro responded within moments and immediately put their training and expertise into practice by performing CPR and using the AED to re-establish Mr. Christel’s breathing.

“[They] were responsible for saving the life of Ken Christel and transporting him to the emergency room … [and] performed a purposeful, distinctive and successful life-saving act on another human being … [and] deserve our thanks, recognition and praise for their excellent judgment and professionalism … and service to the community.”

Christel was also able to attend the event and thank the responders as well.

“These are fine gentlemen who saved my life on June 4,” he said. “I am so grateful … and so appreciative for the services of the Eatontown Police Department and First Aid Squad.”

Life-saving awards were also given to Patrolmen Ryan Braswell and Kevin Licknack for their actions to help save Christel as well.

“We’re filling a patrol position that was vacated by a retirement from this agency,” Chief of Police Michael D. Goldfarb said. “Chris Rossi was chosen after coming out on top of an extensive and thorough hiring process that was started several months ago.

“Chris is a fully trained police officer who currently works for the Somerset County Sheriff’s Department. … He will begin his field training with Eatontown on Aug. 15 [and] we look forward to having him with us for a long and successful career, and I know he is as excited about getting started with us as we are having him here.”

“All the great work that the men and women in law enforcement do every day, the sacrifices that they make, not only in fighting crime, but saving lives, is really something to be admired,” Licitra said.

“Our men and women in law enforcement on the local and state level have really stepped up and made a significant effort in not only saving lives, but also saving our dear animals that we so much care for across the county.”

According to Licitra, on Aug. 13, 2015, the police department received a call about a structure fire at the Country Club Apartments.

Upon arrival Lt. Lucia quickly noticed a smoke-filled apartment and could hear the cries of a dog inside the residence.

“He crawled through the smoke and subsequently located a small dog that was tethered on a very short leash to a stove,” Licitra said. “He quickly rescued this animal, brought the animal outside where it was taken to the Red Bank Animal Hospital where it was saved. In addition, that animal was severely neglected by its owner and subsequently resulted in the arrest of the owner and bringing them to justice with multiple summonses.”

Patrolman Michael Sullivan was also the recipient of a life-saving award.

“On Feb. 4, 2016, officer Mike Sullivan, while off duty and working out at KS Fitness in Toms River, when he saw a man collapse on a treadmill and fall off, he immediately ran over to the man and found that he was completely unresponsive, had no pulse and was not breathing,” Goldfarb said.

After using a defibrillator, Sullivan and a female employee were able to restart the gentleman’s heart and got his breathing back.

“Toms River Police and First Aid arrived a short time later and transported him to the hospital, where after a short stay, this gentleman made a full recovery,” Goldfarb said.

The man, Matt, was able to attend the council meeting to thank Sullivan in person.

“What do you say to somebody who saved your life?” he asked. “I really don’t know what to say other than thank you, and I wanted to say that when I went to the doctor, they told me that the condition of my heart was 100 percent blocked and they called it the widow maker.

“The ambulance did come, but they said that if it wasn’t for Sullivan, another minute and I’d been dead, so really this man saved my life and deserves more than this award.”

L.E.A.D (Law Enforcement Against Drugs) Officer of the Year award recipient, Patrolman Ryan Hennelly, was also honored at the meeting.

“The department has been presenting anti-drug programs in our schools for years … and we’ve always had one of the finest programs anywhere,” Goldfarb said.

“Since taking over the program about eight years ago, Ryan Hennelly has taken it to a completely new level. He’s got a true passion for teaching the program and has taken an already great program and made it into something that is really unprecedented.”

Hennelly was chosen from hundreds of his peers around the state as the L.E.A.D Officer of the Year for the state of New Jersey.

“Ryan teaches the program in all three of the borough’s elementary schools, and has reached out to and involved our local business community as sponsors and has turned the program into something really special,” Goldfarb said.

Goldfarb also presented a Police Unity Tour Award to a group of borough officers who recently participated in a 300-mile bike ride over three days from New Jersey to Washington, D.C. to raise money for the families of police officers killed in the line of duty.

“Officers ride from New Jersey to Washington, D.C. where they meet up with other officers from around the country at the National Police Memorial and join with the families of the fallen officers and hold a candlelight service in remembrance of their fallen comrades,” Goldfarb said. “This year, the group that our officers rode with were able to raise over $11,000 for the cause which goes to the families of the officers as well as for the upkeep of the police memorial.”

“Sgt. Bryan Mulholland, Patrolmen Christopher Bartlett were asked to be personal escorts for the wives and children of the fallen officers as they were led into ceremony,” Goldfarb said. “These two officers, after completing the 300-mile bike ride, got into full-dress uniform and walked with the wives and children … and described this honor as one of the most emotional experiences of their career, but one they were very proud to be picked for.”