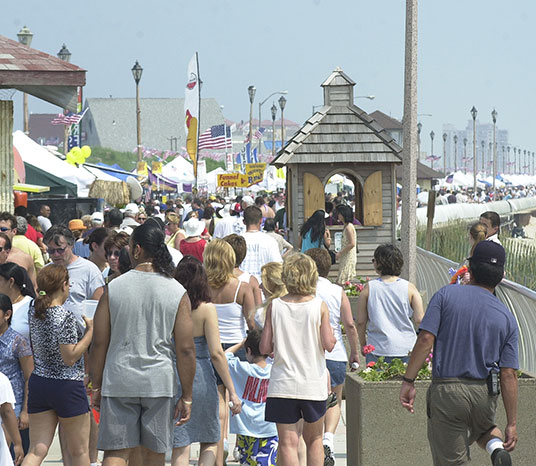 Since April when the new boardwalk opened, the Save Ocean Avenue Committee of Long Branch with its many supporters has been working very hard to convince the city to keep cars off Ocean Avenue in the paved Green Acres linear park.

The city’s plan was to put cars along the boardwalk from Brighton Avenue north to West End Avenue in the Green Acres park. Our efforts opposing this plan have gotten support from hundreds of people, the Long Branch Coalition of Condominiums Association, residential families, visitors, boardwalk walkers, businesses, Green Acres, freeholders, politicians, etc. Many phone calls were made and letters written. So far, the efforts of many hundreds of people have been successful.

The City of Long Branch has just opened the Ocean Avenue roadway for more traffic from Howland Avenue south on Ocean Avenue and out on West End Avenue. They left a narrow path next to the boardwalk for bikes, skateboarders, rollerbladers, tricycles, etc. While this is not ideal, it is better than putting cars into the Green Acres park with people, beginning at Brighton Avenue going north and exiting at West End Avenue.

However, the new traffic pattern just instituted increases traffic volume and flow from Howland Avenue south along Ocean Avenue exiting out through West End Avenue. There is a lack of signage and speed limit signs in that area and no sidewalks for pedestrians and dog walkers to walk on. Ideally, it would have been better to keep Howland Avenue and West End Avenue dead ends, which already had the positive effect of reducing the traffic flow and the amount of cars going past Vine Court, keeping it safer for pedestrians.

The new traffic flow and amount of cars, trucks and motorcycles now in that area has already increased significantly, with traffic speeding down Ocean Avenue, stopping along the roadway and fighting for the few parking places in Vine Court and in that area and then only being able to exit at West End Avenue.

As of now there are no cars and traffic at the beginning of the boardwalk at Brighton Avenue and a narrow bike path at Vine Court, which go north all the way, without cars, up Ocean Avenue to North Bath Avenue where traffic begins.

It is wonderful to be able to enjoy the magnificent new boardwalk, bluffs and ocean as a paved Green Acres park. At least now there is a balance of keeping cars and traffic out of the Green Acres park. Pedestrian safety on Ocean Avenue should be of the highest priority.

Let’s hope there are no more plans for cars and traffic to mix with people and bikes along the boardwalk in the Green Acres linear park and beyond.

Part of the intent of the state’s Green Acres park program is to preserve open space that is interconnected, scenic, historical, recreational and used by the public in a safe, enjoyable environment. For more information, visit www.saveoceanave.com.