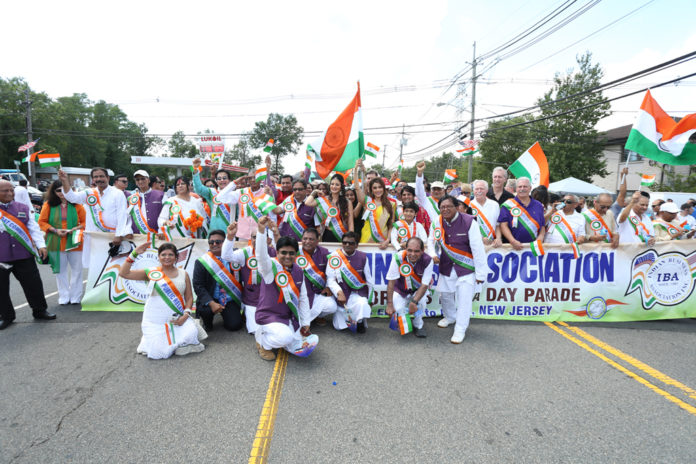 With 24 floats and dozens of marching groups, this year’s parade was the largest in the history of the event. More than 100 New Jersey-based community, professional, business, and religious organizations participated and supported the parade, which included ethnic bands, music and live performances.

Chandrakant Patel, chairman of IBA, remarked that this parade reminded him of the very first one in 2005. “That day was very warm too. But this parade always goes on successfully, rain or shine,” he remarked. A big reason for the success is the number of volunteers that help with the effort.

“We generally have about 115 dedicated volunteers who help with everything from setting up the stage to decorating the floats,” explained Mahesh Shah, trustee for the IBA.

A fan favorite of this year’s parade was the Air India float, which was occupied by an entire flight crew. Air India announced the launch of a new Ahmedabad – Newark flight service. Other highlights included the Dhol tasha group, The BCB Community Bank Float, the Investor’s Bank float, and the Accurate Diagnostics Float.

“The IBA Parade is a statewide celebration of the Indian community,” said IBA President Dhiren Amin. “Indian Americans from across the state get together on Oak Tree Road, the heart of New Jersey’s little India, to celebrate our common history, traditions, and culture,” he continued.

The highlight of the festivities was the swearing in of Viru Patel, who was appointed to the Woodbridge Council.

Patel is the first councilman of Indian descent in the history of Woodbridge Township. According to the 2010 census, nearly 25 percent of Woodbridge Township’s population is Asian. Patel will represent the 4th Ward, which includes Oak Tree Road. He was sworn in by Mayor McCormac. “It is such an honor to be sworn in on India Square together with so many of my fellow South Asian Americans,” Patel said.