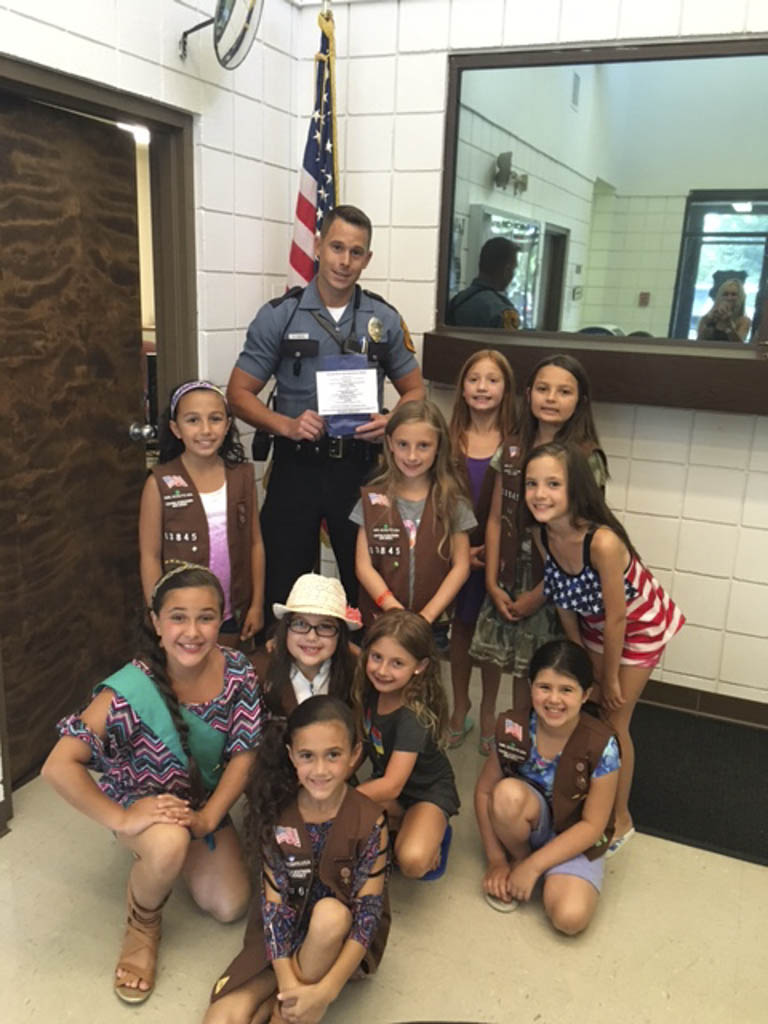 With the recent negativity surrounding police departments across the country, Brownie Girl Scout Troop 83845 of Monroe Township did their part in sending a sweet reminder that Blue Lives Matter.

Members of the troop, who are 7 and 8 years old, gathered together funds from their annual cookie drives and made close to 150 survival kit bags for law enforcement officers. The kits were delivered to police departments in Edison, Elizabeth, Helmetta, Jamesburg, Spotswood and Monroe.

“This project, making the bags for the officers, was one that meant a lot because we have three law enforcement families in our troop,” said Toni Roy, who leads the troop with Nicole Turcus. “It was for [the girls] to support each other as well as the officers in the communities.”

The troop belongs to the MOJASPHE Council for Girl Scouts, which encompasses Monroe, Jamesburg, Spotswood and Helmetta.

Roy said two fathers are police officers in Edison and Elizabeth, and the girls made additional bags for those departments.

She said the other father is an officer in Spotswood, and the girls were given a tour of the Spotswood Police Department and had their mugshots taken.

The bags were filled with Lifesavers to remind officers of the many times they have been one; Smarties to give officers wisdom for those split-second decisions; Hershey Kisses to show love to the officers; gum to help everyone stick together; Tootsie Rolls for when the officers have to roll with the punches; Peppermint Patties to help officers keep their cool; Mounds for the mounds of courage officers show; and Laffy Taffy to remind officers that laughter is a great stress reliever.

Each of the bags also included 10 to 20 personalized inspiring messages from the girls to show their appreciation for the officers.

Members of the troop were invited to the Helmetta Council meeting on Aug. 17. They were greeted with coupons titled, “Caught being nice … Enjoy a slice!” for a free slice of pizza and soda at Villa Borghese II in the borough, which were sponsored by Mayor Chris Slavicek.

The mayor said in light of what has been happening across the country, it was great to hear that troop members delivered care packages for the officers.

Roy said the troop members, who are all from Monroe Township, have been together since they were Daisies when they were in Kindergarten, and all of them will enter the third grade in September.

She said the girls have opened their hearts to many families in need with care packages, including one for a sick child in Florida who was a family member of one of their first grade teachers, a Monroe family who lost a young boy, another Monroe family whose husband/father died suddenly this summer and a family in Staten Island, New York, who lost their home to a fire.

The troop also sent care packages and holiday cards to a military troop overseas and cookies to some U.S. Marines waiting to deploy during the cookie season.

They also have helped out at the local food pantry and participated in a disease awareness program with JAR of Hope to learn about Duchenne Muscular Dystrophy, and they helped implement the organization’s push-up program to help them reach a Push-Up Guinness World Record.

Roy said the troop members may be young, but they are always asking who they can help next.

“We feel teaching them how to be kind, considerate and caring to others will allow them to leave their mark and make the world a better place,” she said. “It is important for them to learn these values early on.”