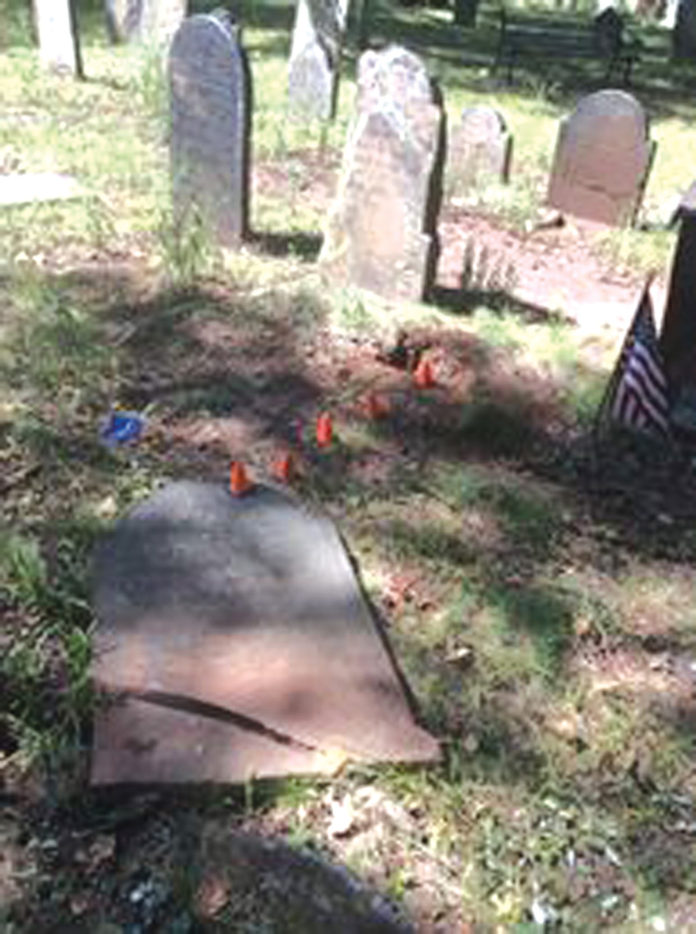 METUCHEN — As police continue to investigate the vandalism of at least 11 headstones at the historic Old Colonial Cemetery on Main Street, the Metuchen-Edison Historical Society is collecting donations toward repair and restoration work at the 300-year-old graveyard.

During the evening of Aug. 18 and the morning of Aug. 19, the stones, which date from 1796 to 1892, were vandalized. Police were notified of the incident by a resident walking through the cemetery on August 19.

As of August 26, Police Sgt. Arthur Flaherty said there were no updates on the incident.

Tyreen Reuter, a member of the Metuchen-Edison Historical Society, said most of the stones were large stones that were pushed over and broken.

“Some were pulled out of their settings and thrown,” she said.

The cemetery was established between 1715 and 1730 as the burying ground associated with the Presbyterian Church. The grounds contain 1,045 marked graves and 60 unmarked graves. Of these, 59 are graves of Revolutionary War soldiers and seven are “Patriots” who contributed to the cause.

Reuter said as a 300-year-old site, many stones have been damaged by natural causes over the years. In July 2015, the Society co-hosted a Cemetery Preservation workshop at the site, and several stones were repaired and cleaned.

Since the incident, the Society, a nonprofit organization, has received many requests about how people can help.

“We cannot yet organize a cleanup session or physical work at the cemetery until further on in the investigation by the borough and police, but we can collect donations toward our existing Cemetery Fund, which was used over the last few decades towards critical work on the site,” Reuter said.

Funds gathered will be used to restore the damaged stones, stabilize and improve conditions of others, and repair and preserve as many other grave markers as possible in the historic cemetery.

Donations can be made to the “Metuchen-Edison Historical Society” at P.O. Box 61, Metuchen, NJ 08840 or visit https://squareup.com/store/metuchen-edison-historical-society/