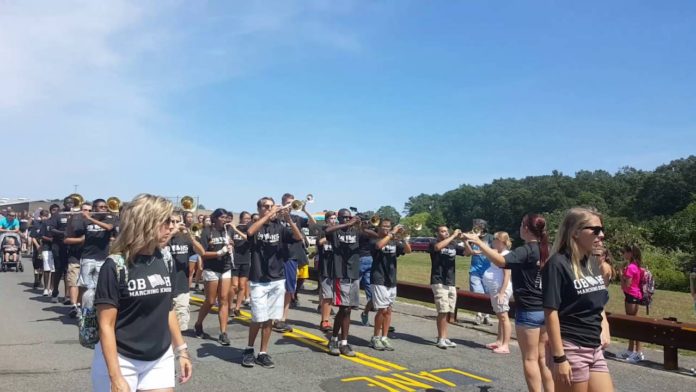 OLD BRIDGE — Olympian Laurie Hernandez may only be 16 years old, but she has single-handedly put Old Bridge Township on the map.

“This is amazing,” said Darlene Cirillo of Old Bridge. “We never had an Olympian gymnast from Old Bridge before, and this may be the only time we will.”

Cirillo joined thousands of people who lined the streets of Old Bridge on Aug. 27, many waving American flags, waiting for a glimpse of Laurie. She and her coach, Maggie Haney, sat on top of a black Mustang, smiled and waved during a parade filled with fanfare, pomp and circumstance to welcome Laurie back to her hometown from the Olympic Games in Rio de Janeiro.

Laurie’s mom and dad, Wanda and Anthony Hernandez, followed in another vehicle, and Laurie’s older siblings, Marcus and Jelysa, who had black T-shirts that read “Bro” and “Sis” on the back, followed in a third vehicle.

Laurie, a 16-year-old phenom, earned a gold medal as part of the U.S. Women’s Gymnastics Team as well as a silver medal for her individual performance on the balance beam.

When Laurie arrived at Carl Sandburg Middle School, she was met by Lt. Governor Kim Guadagno, who had brought her niece to meet Laurie, as well as state Sen. Sam Thompson (R-Middlesex) and other county and local officials.

The Old Bridge High School band led the parade procession into Lombardi Field where many awaited a meet-and-greet.

Waiting in the crowd were 8-year-old Kaylee Godfrey and her mom Tiffany of Manalapan. Kaylee made a sign that said “Laurie Hernandez, you are my inspiration — Old Bridge proud.”

Kaylee said she really likes Laurie, and aspires to be her someday. She said she currently does not do gymnastics, but Laurie has inspired her to start the sport.

Tiffany Godfrey, who grew up in Old Bridge, said she and her daughter watched Laurie and the rest of The Final Five compete in Rio.

“We have it on DVR and we can watch it again and again,” she said with a smile.

The area was filled with concession stands selling ice cream and cotton candy and an inflated bounce house for the children.

The community rallied behind Laurie and held a congratulatory sendoff on July 14. Then the community came together to root her on at a watch party in council chambers as Laurie earned her silver medal.

Laurie trains at Monmouth Gymnastics Academy in Marlboro with coach Haney. She began making her mark as a competitor at age 12 when she qualified for the Visa U.S. National Championships. By July 2013, she had become a member of the U.S. Junior National Team and represented the U.S. at the Junior Japan Invitational, where she earned a bronze medal in the all-around. She helped the U.S. win the Junior Mexican Cup later that year.

Earlier this year, Laurie began entering senior-level competitions. In June, she finished third all-around in the P&G National Championships. In April, she helped the U.S. team to a first-place finish in the Pacific Rim Gymnastics Championships. She began the year with a bronze medal in the all-around at the 2016 City of Jesolo Trophy competition in Italy.