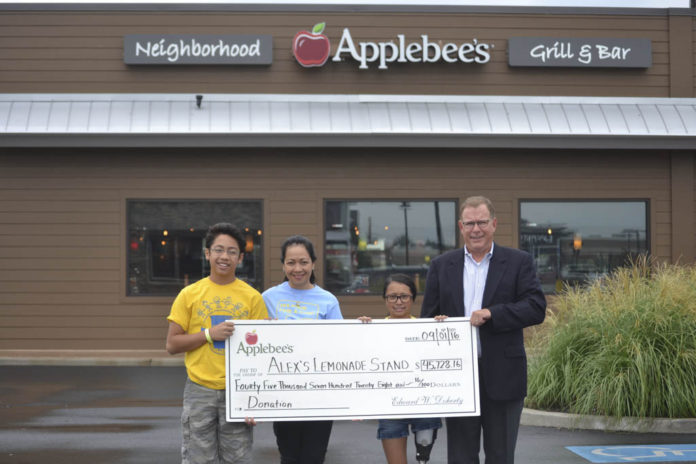 Applebee’s Neighborhood Grill & Bar presented a check for $45,728.16 to an Alex’s Lemonade Stand Foundation Ambassador Hero Family from Sayreville, who accepted the donation on behalf of the charity on Sept. 1.

Throughout July, Applebee’s locations in New Jersey — owned and operated by Doherty Enterprises — raised a total of $19,925.15, in which 100 percent of proceeds from sales of its paper lemons and 25 cents from sales of its lemonade drinks benefited the nonprofit organization dedicated to eradicating childhood cancer, according to information provided by Applebee’s.

Guests were also encouraged to donate to the cause during their meal through the restaurants’ new tabletop devices.

The month-long campaign marks the 11th straight year that Applebee’s franchisees have supported Alex’s Lemonade Stand Foundation, with nearly $6 million in fundraising proceeds generated to benefit the organization since 2005, according to the statement.