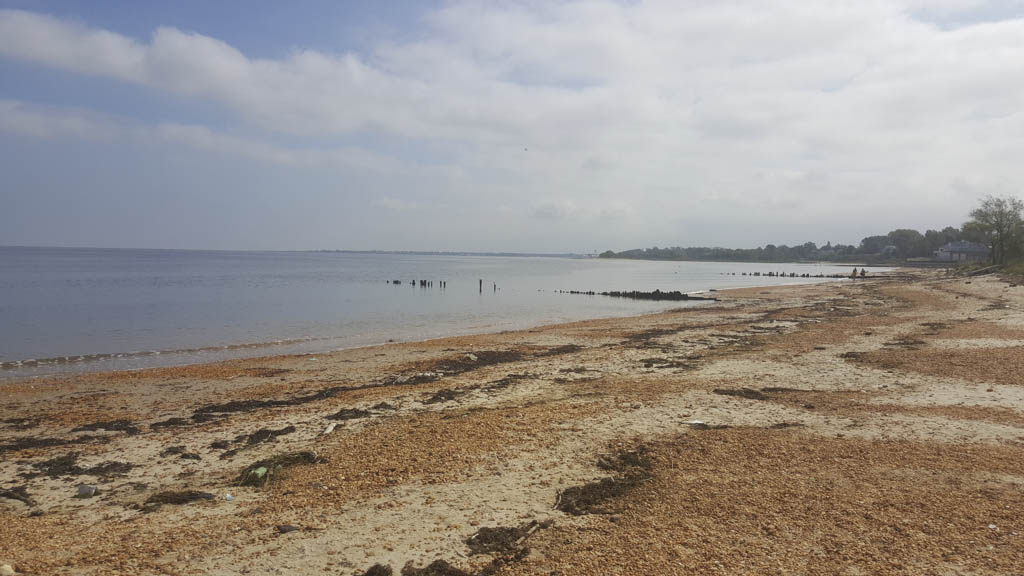 OLD BRIDGE — For many residents like Samantha Manburg, who lives along the waterfront in Laurence Harbor and Cliffwood Beach, they want their beach back.

“We want our recreation back,” she said. “We want to enjoy the sight and outdoor view. … That is why we live here.”

However, that view, seven years ago, became a metal fence with signs in English and Spanish prohibiting access to the beach and seawall — no swimming, no sunbathing and no fishing — due to sand, sediment and water contaminated with high levels of lead.

Elevated levels of lead, antimony, arsenic and copper, as well as areas of slag, a by-product of metal smelting and battery casings, have been identified by the New Jersey Department of Environmental Protection (DEP) along the Laurence Harbor seawall near the area where the processing by-products were deposited.

The seawall was reported to have had metal slag from blast furnace bottoms deposited along the beachfront in the late 1960s and early 1970s.

About 2,500 feet of the seawall have been impacted.

The signs warn that activities such as sitting on the seawall and eating or drinking, playing in the sand and/or swimming could result in exposure to lead which may be harmful to public health, especially children and pregnant women.

Philip Klimek, chairman of the Raritan Bay Community Advisory Group, said there was initial discussion to cap the slag. He said superstorm Sandy in 2012 proved that the option would have failed because the storm would have wiped the cap away.

“It proved that we should not leave the contamination there,” he said.

The overall site is approximately 1.5 miles in length and consists of the waterfront area between Margaret’s Creek and the area just beyond the western jetty in Sayreville and extends from the Cheesequake Creek Inlet into Raritan Bay.

As a result of urging by Congressman Frank Pallone Jr. (D-Middlesex, Monmouth), the Raritan Bay Slag site was placed on the Superfund National Priorities List in 2009.

On Oct. 3, Pallone joined Mayor Owen Henry, representatives of NY/NJ Baykeeper, Raritan Riverkeeper, the Raritan Bay Community Advisory Group, Middlesex County Freeholder Charles Kenny and others to announce $7 million in funding from the Environmental Protection Agency (EPA) to begin the cleanup at Margaret’s Creek, one of the three sectors of the overall site, which spans 47 acres.

“I am pleased that the EPA is moving forward with a plan to clean up lead contamination at the Raritan Bay Slag Superfund Site in Old Bridge and Sayreville,” Pallone said. “I urged the EPA to have this site placed on the Superfund National Priorities List to protect the public, as well as the environment, and enable the local residents to go back to utilizing the beachfront areas safely. I am thankful they heeded my call, as even at low levels, lead is a toxic metal that can be especially dangerous to children’s developmental health.”

Pallone said of all the Superfund sites in the state, cleanup for the Raritan Bay Slag Superfund Site is moving the fastest due to strong and persistent efforts by the township and the public.

Greg Remaud, deputy director of NY/NJ Baykeeper, agreed, stating that the tireless work of community members and key elected officials has resulted in an earlier-than-expected start to the removal of toxic lead slag.

“This announcement is particularly impressive because EPA is willing to take action prior to any settlement with the responsible party, National Lead (NL),” he said.

In 2014, the EPA directed NL Industries to conduct a $79 million cleanup at the site. NL Industries has been identified as a party responsible for the cost of cleanup. Historical documents provide evidence that at least some, if not all, of the slag found at the site came from the former National Lead Company (now NL Industries) facility in Perth Amboy, which was in operation approximately 40 years ago.

Pallone said since then, NL Industries filed a lawsuit and the matter is currently in litigation.

Donna Wilson, director of operations for the Raritan Bay Community Advisory Group, said the lawsuit may affect the entire Township of Old Bridge if the courts find that the township is partly responsible.

Pallone said he strongly believes the public should not be responsible for cleaning up contaminated sites. He has introduced the Superfund Polluters Pay Act, which would reauthorize the original Superfund fees and make polluters, not taxpayers, pay the costs of cleaning up Superfund sites.