Kelly Anne Rossidis, daughter of Susan and Steven Rossidis of Matawan, was married May 7, 2016, to Steven Joseph Grobelny, son of Kathleen and Paul L. Grobelny Sr. of Middletown.

The Rev. Thomas Vala and Deacon Mark Micali performed the ceremony at Saint Clement’s Roman Catholic Church, Matawan, where the bride was given in marriage by her father.

Maids of honor were Allie Clifton and Lindsey Behr. Bridesmaids were Lauren T. Dean, sister of the bridegroom; Kate E. Grobelny, sister-in-law of the bride; Cassandra McGlynn and Mandee Richards, both cousins of the bride; Caroline Feirstein; and Christine Doll.

After a reception at The Palace at Somerset Park, Somerset section of Franklin, the couple vacationed at the Jersey Shore. An upcoming wedding trip is planned.

The bride is a graduate of Mater Dei High School, Middletown, and Brookdale Community College, Lincroft section of Middletown, where she earned an Associate of Applied Science degree in radiology. She is a radiologic technologist.

Her husband is a graduate of Middletown High School North and Rutgers University School of Engineering, Piscataway, where he earned a Bachelor of Science degree in electrical and computer engineering. He is employed as a customer-service engineer with Dell EMC Corp., Warren.

The couple resides in Howell. 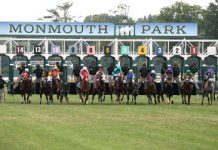