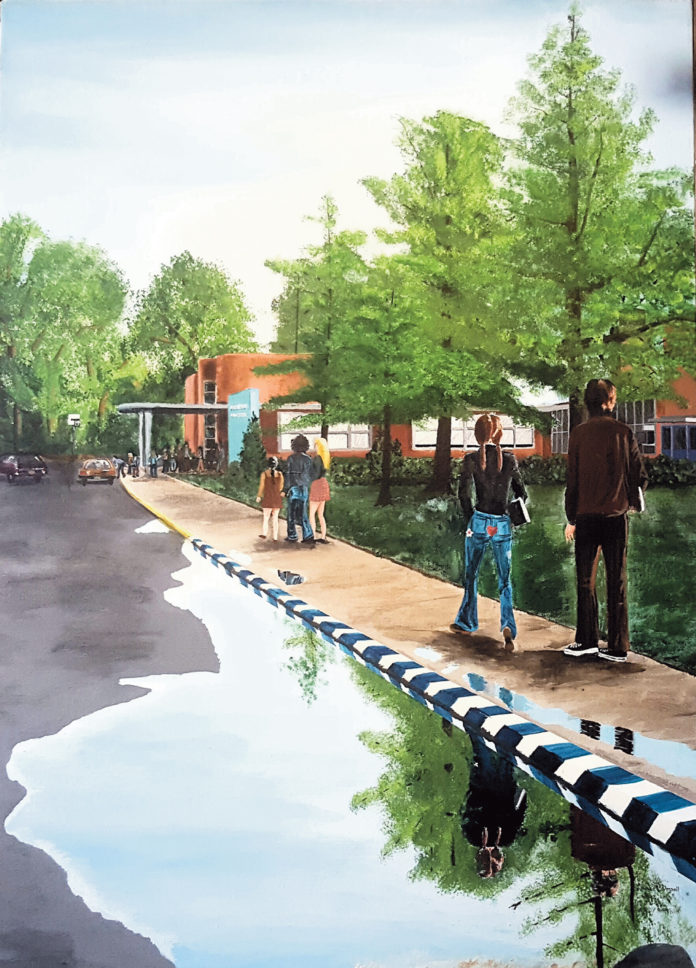 METUCHEN — Aside from maybe the wardrobe and the motor vehicles of the 1970s, the artwork displayed this month in the art gallery at the Metuchen Public Library has stood the test of time.

Art students at Metuchen High School in the 1970s worked to create seven large, realistic paintings that depict the various staples in the borough.

“They worked in groups and created magnificent [artist] Alex Katz-type works,” said Kathy Glaser, who is the co-director of the gallery with Cathy Tardosky. “We’ve been trying to track down the artists with little success.”

The realistic artwork includes the portrayal of the Metuchen Train Station, Metuchen Public Library, Metuchen High School, members of the Metuchen High School marching band and color guard, St. Luke’s Episcopal Church and the antique horse trough, a one-time water fountain for passing horses as well as dogs during the end of the 19th century and beginning of the 20th century that sits along Middlesex Avenue, Route 27.

The horse trough is currently in Alexander City, Alabama, for much-needed restoration. The artwork by the students depicts the horse trough with a horse and carriage.

Glaser said the artwork was donated to the Metuchen Public Library from the high school at one point, and the pieces of art were tucked away downstairs at the library.

“We knew we wanted to display these art pieces in their own show,” she said. “If we get more responses from these students, we can hold a reunion reception.”

The art gallery is in its third year at the Metuchen Public Library, which offers the community the opportunity to display works of art or personal collections of interest.

“We have run 22 different kinds of shows with themes of the seasons to a show all about New Jersey and about faces,” said Glaser, who added a reception is held at the beginning of each show.