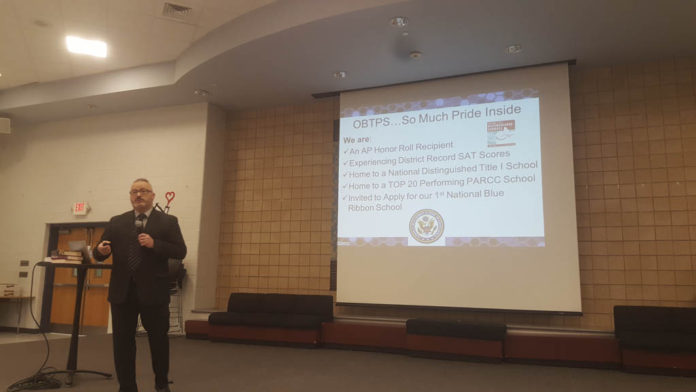 OLD BRIDGE — The multiple options of programs and offerings from Advanced Placement to vocational classes, character building and diversity are what make the Old Bridge Public Schools a great experience for students growing up in the township.

Old Bridge High School students Dylan Schwartz, Ravi Gandhi and Roshni Gandhi said they think that it could all be taken away with the recent Albert Einstein EnergySmart charter school proposal.

“Students would not be able to reach their full potential,” said Schwartz.

He said he believes the values of integrity and respect that he has learned since kindergarten and activities that he and his fellow students hold near and dear to their hearts would not be possible if a charter school is allowed in the township, due to loss of funding.

The estimated cost from the Old Bridge school budget would be $1.6 million in the first year of the proposed charter school’s inception and $3.6 million by 2020-21.

The district already distributes funds for students sent to the Hatikvah International Charter School in East Brunswick. In the 2016-17 school year budget, the district funded $158,237 for sending 15 students to the school.

The students as well as township school officials and the community made it clear at the Superintendent’s Forum meeting on Jan. 31 held at Old Bridge High School that a charter school has no business in a school district like the Old Bridge Public School District.

Ravi Gandhi said at the elementary school level, the focus should not be career driven. His sister Roshni agreed, adding that the charter school would create an unhealthy competition with an already thriving school district.

Schools Superintendent David Cittadino addressed the large crowd on the charter school proposal that was brought to his attention in October of 2016.

Cittadino said the proposal for the Albert Einstein EnergySmart charter school is at the Sayre Woods Bible Church, 2209 Route 9 south.

The proposed K-2 grade Science, Technology, Engineering, Arts and Math (STEAM) school would have 160 students for the first year (2017-18).

By the 2020-21 school year, the proposal calls for the expansion of grade levels up to fifth grade with a student enrollment of 360 students.

Phase one of the proposal was submitted to the New Jersey Department of Education (NJDOE) in October, and phase two was submitted in December.

Decisions on moving phase two to the next stage in the process will be made by Feb. 15 for schools that may open in the fall of 2017, according to the NJDOE’s website.

Oguz Yildiz, lead person at a similar model school — Thomas Edison EnergySmart Charter School in the Somerset section of Franklin Township — cited Old Bridge Township as a prime location for their vision to instill in every student the desire to continually expand their intellect and use the content knowledge and skills they have acquired to participate and responsibly shape the direction of a complex and ever-increasing climate and energy-security-focused world.

At the Albert Einstein EnergySmart Charter School, its mission and vision is in direct alignment with the STEAM philosophy, according to the proposal.

Yildiz noted that in their site location decision they observed that Jonas Salk Middle School, one of the two public middle schools in the township, was designated as a focus school by the NJDOE on Jan. 24.

Focus schools comprise about 10 percent of schools with the overall lowest subgroup performance, a graduate rate below 75 percent and the widest gaps in achievement between different subgroups of students, according to the NJDOE’s web site.

Cittadino countered that Mario Barbiere, executive director of NJDOE’s Region 5 Regional Achievement Center, which serves Monmouth, Ocean and Middlesex counties, recommended that Jonas Salk Middle School in January of 2015 exit off the list as a focus school since the officials had done everything to address the gap of the Asian population at the school outperforming the special education students.

He said as of now, Jonas Salk remains on the focus list due to a transition of officials in the federal program.

“There are schools on [the list], which were once Blue Ribbon Schools so they have subgroups, which score higher than other subgroups,” Barbiere said. “The goal is to raise the achievement for all students and Salk is doing that.”

He said their schools are pro innovation, with many programs for students including the Kids to College program, Shoprite Transition program, Superintendents’ lunch brunch, readers of the pack with therapy dogs in the classroom, code in the classroom, NoteBowl hybrid classes and the offering of two Sci-Dome planetariums on site.

Cittadino said the 9,000 or so students enrolled in the district have performed above the national average.

He said they have seen gains in district record performance for the SAT standardized test; increased advanced placement participation and performance; significant gains in PARCC (Partnership for Assessment of Readiness for College and Careers) performance, noting their elementary schools performed in the top 20 in PARCC scores; and Cheesequake Elementary School designated a nationally distinguished Title I school.