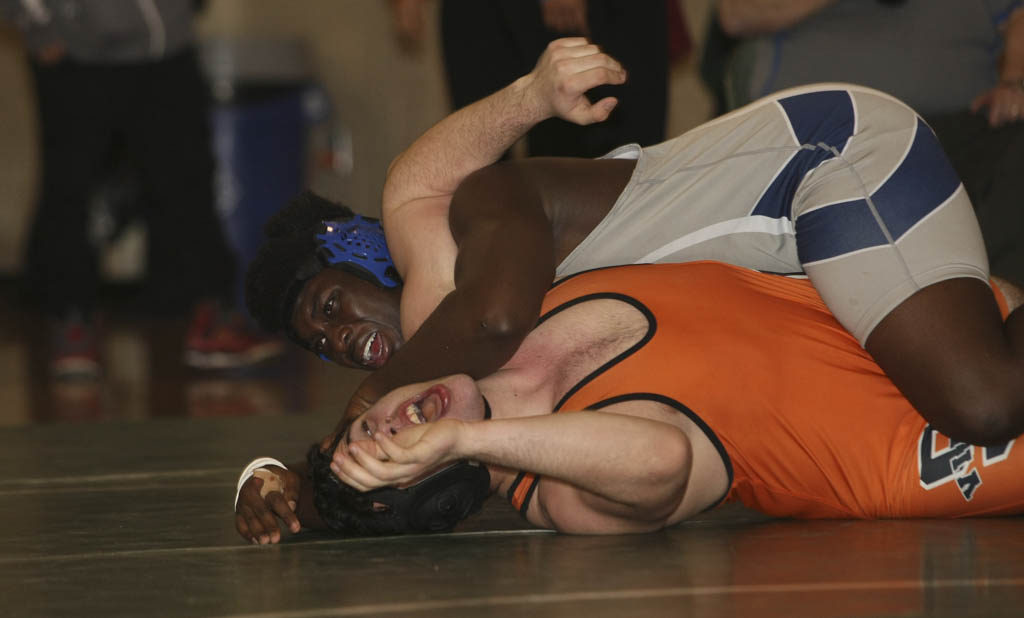 When the Sayreville War Memorial High School wrestling team began the season, coach Marcus Ivy was hoping it would be more than just a rebuilding year.

“We have talent, but it’s young talent,” the fifth-year coach said. “I know they’re good wrestlers — they just didn’t have much varsity experience.”

“There were a few teams that we weren’t quite ready for, but we were competitive against most of our opponents,” the Sayreville coach said. “Our guys got to experience some success, got a year of varsity competition and also saw what it was like to go against some top teams.”

Sayreville’s top grappler is heavyweight Mike Porcaro. The senior sports a 29-1 mark — and that loss came in overtime. The Bombers’ co-captain won the Greater Middlesex Conference heavyweight title by pinning Edison High School’s Jack Karvaski in 3:02 Jan. 28. Porcaro should be a factor at the upcoming District 19 competition in Old Bridge and is expected to move on the Region 5 tournament.

Sophomore Trevor Mastoreo is also expected to make his mark at the district event. He went 22-8 at 132 pounds. Junior Brandon Alicea posted 16 wins against 13 defeats at 126 pounds. Senior Kyle Wavro, who is 7-4 at 182 pounds, could also contend for the district title. Senior Corey Knoth, who only recently became eligible after moving back to town, could surprise at 160 pounds.

The Bombers are loaded with talented sophomores, including Benedict Arthur, who turned in a 17-13 mark while often squaring off against upperclassmen at 220 pounds. Alec Coelho rebounded from a 1-10 start to go 14-11 at 138 pounds; Savon Kirksey won 10 matches at 195 pounds; and Nino Oneto has nine victories competing at 170 pounds. Scott Mish (113), Connor Bouchard (152) and Mykhaylo Khalabudnyak (160) all looked promising as well, Ivy said.

In addition, freshman Darren Figueroa had a rough introduction to varsity wrestling. After winning just one of his first eight matches, Figueroa went .500 the rest of the way. Ivy noted that senior Ralph Feola, a co-captain, was a capable leader who won 12 times. Another senior, Isaac Jodar, did a good job competing at 145 pounds.

“Our guys really learned a lot, and we have a lot to build on for next year, and you never know what might happen in the districts,” Ivy said. “I think some of our younger guys may surprise some people. They guys are looking forward to it.”