EDISON – A 22-year-old township man was killed after the car in which he was riding veered off the road and struck a tree.

Joel Patrone, 22, of Edison, was pronounced dead at 5:54 a.m. on  Feb. 18 at Robert Wood Johnson University Hospital (RWJUH) in New Brunswick, where he was taken following the crash at 5:03 a.m., according to a statement prepared by Middlesex County Prosecutor Andrew C. Carey and Chief Thomas Bryan of the Edison Police Department.

Two others in the car, the driver and another passenger, a 22-year-old Edison woman, also were hospitalized at RWJUH. The driver was listed in stable condition and the woman was listed in good condition, as of press time.

The driver, Mandeep Singh, 21, of Edison, was charged with driving while intoxicated and death by auto. The criminal charges were filed after the investigation determined that the defendant was allegedly intoxicated when he veered off of Old Post Road near Preston Street and struck the tree, according to the statement.

Anyone with information should call Sgt. Michael Carter of the Edison Police Department at 732-248-7400 or Detective Donald Heck of the Middlesex County Prosecutor’s Office at 732-745-8842. 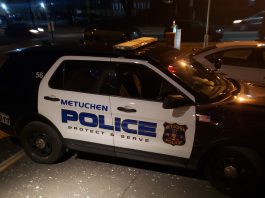