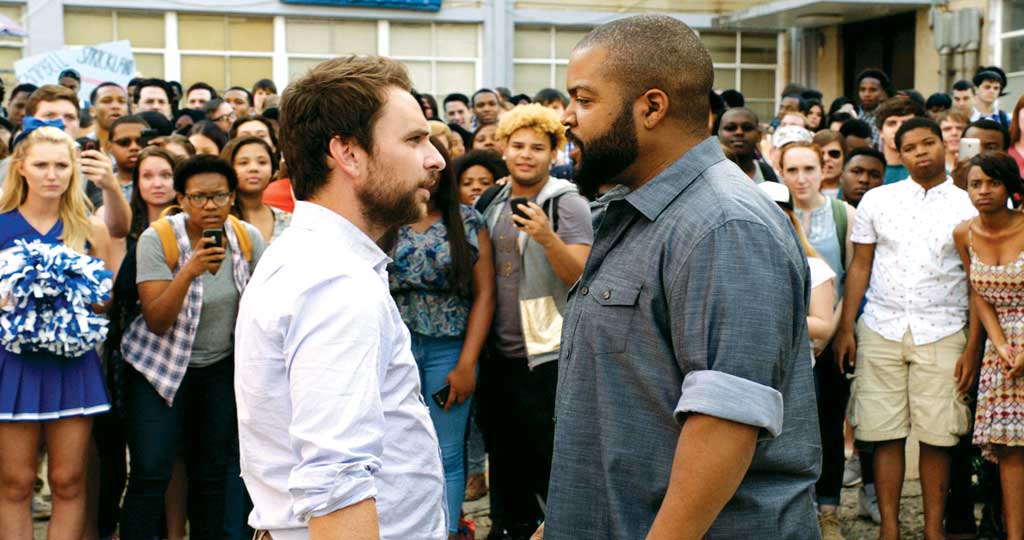 None of the teachers are ready for what the last day of school brings in the new movie Fist Fight. The kids are wild and pranks are occurring at a rate that makes the national debt growth look slow.

When one student takes things too far, Mr. Strickland (Ice Cube) destroys a desk.
And when Mr. Campbell (Charlie Day) crumbles under pressure and snitches, it’s on — the teacher fight is about to become reality.

Fights happen in schools, but they usually don’t involve the staff. This fight features two very different teachers. Mr. Strickland is the disciplinarian, ruling with an iron fist. There are no free passes in his history class. Mr. Campbell is the nice teacher who generally gets walked on by students and other teachers alike. His wife has a baby on the way and he cannot afford to lose his job. Campbell may have saved his job, but may lose his face, as Mr. Strickland wants revenge.

In this day and age, with technology everywhere, word quickly spreads of the impending schoolyard battle. The hashtags fly as everyone looks forward to the 3 o’clock duel after school. Has it come to this?

At moments Fist Fight is funny, very funny. The problem is that there are too many moments that are extremely vulgar for what seems to be no good reason. Those sequences grind the film to a halt. Instead of being genuinely funny first and vulgar second, the “funny” gets left behind. Charlie Day and Ice Cube are decent foils for one another and, despite the thin setup for the fight they take part in, they bring the very different personalities of their characters to light.

The story tries to make the day self-contained, but instead just raises question after question. Questions like, why is Mr. Strickland so mean? And, did these two teachers even know each other before this day? And that’s just the beginning. I could go on and on about my questions of what led these characters to the epic fight that we build to.

I wanted to really like this film, but I ended up just being underwhelmed. I felt like I did when most substitute teachers came into my classes. They paled in comparison to what we expected because they weren’t always living and breathing the subject. The filmmakers gave us a warmed-over and very generic worksheet of a film. Just fill in the blanks and move along.

I’m left wondering what it would have been like in my day if teachers in my school went out back and fought out their problems. Mr. Brandt vs. Mr. Merkel, Mrs. Roehm vs. Mrs. Rubatt, or the epic Mr. Wegner vs. Mr. Goldman would have been quite interesting, but wouldn’t have drawn the crowds that this battle had. Instead, Cube vs. Day will just have to do.

Brought to you by the publishers of TV Guide, the ultimate TV resource packed with celebrity news and commentary on what’s new and what’s good to watch. Get TV Guide at 88% off the cover price: call 800-866-1400 or visit tvguidemagazine.com. ©TV Guide 2017.

Collide
Rated: PG-13
Stars: Nicholas Hoult, Felicity Jones, Anthony Hopkins
Director: Eran Creevy
We all do crazy things in the name of love. Casey’s girlfriend has a medical emergency while abroad. To pay for her treatment, Casey returns to a darker part of his life and helps pull a heist that puts both his girlfriend and himself in the crosshairs of an evil drug lord.

Get Out
Rated: R
Stars: Daniel Kaluuya, Allison Williams, Catherine Keener
Director: Jordan Peele
When a young African-American man visits his Caucasian girlfriend’s family in the country, he soon realizes that there is something sinister going on in this strange community. Is he at risk or can he leave in time?

Rock Dog
Rated: PG
Voices of: Luke Wilson, Eddie Izzard, J.K. Simmons
Director: Ash Brannon
On Snow Mountain the dogs have been raised to guard the local sheep. But Bodi doesn’t want to guard — he wants to rock. He’ll travel to find a rock star named Angus in an attempt to get the mentor he needs. Will Bodi be able to follow his passion and play music, or will he come up empty on his quest?