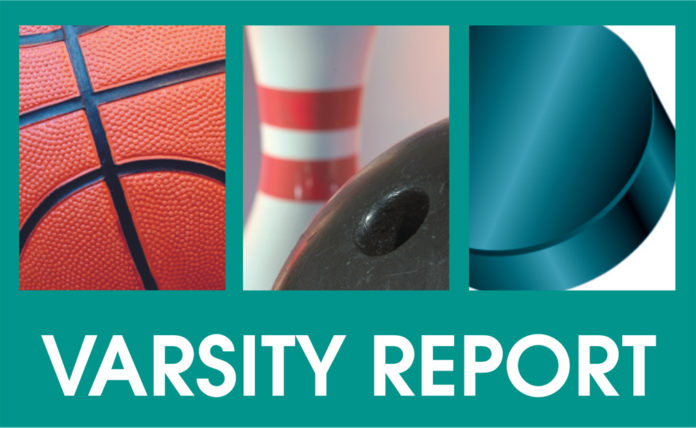 The top four finishers advanced to the state championships. In the past, only the top three advanced.

A year ago, Allentown also advanced two wrestlers — Jordan Rugo and Zach Turner — and this year’s pair looks to become the first state place-winners since Ross Scheuerman finished sixth in the state in 2011.

“The key is for them to keep doing what they’ve been doing and not change who they are — to stay aggressive and wrestle their style,” coach Mitch Nock said. “Both have the ability [to place in the state championships]. They dominated this weekend [at the regions].”

Lamparelli (106 pounds), who won Mercer County and District 22 championships, is 36-2, with both losses coming to the two top-ranked wrestlers in the state.

He bounced back from a 9-0 loss to Christian Brothers Academy’s Nick Schutzenhofer in the region semifinals by beating Manalapan High School’s Paul Santomarco, 4-0, in the wrestlebacks to earn his ticket to the state finals and then coasted to a 14-0 victory in the third-place consolation over Long Branch High School’s Ryan Zimmerman.

McDermott (170 pounds), who is 29-3 and a county champion, suffered all of his losses to Howell High School freshman Shane Reitsma, including the District 22 finals and in the region semifinals, 10-6. McDermott bounced back with a vengeance, scoring a 16-3 decision over Tom Hill of Northern Burlington County Regional High School in the wrestlebacks to secure his spot in the state championships. In the consolation, he pinned Nottingham High School’s Jonathan Jacobs at 1:32 while carrying an early 2-0 lead.

“Lamparelli is a technician. He always works to improve. He never stops,” Nock said. “McDermott is very aggressive and never takes time off on the mat — a relentless style that everybody has to keep up with.”

Lamparelli achieved his goal from the start of the season to make the state championships.

“I just try to stick to my best moves,” Lamparelli said. “I’m most comfortable on top. My best trait is my defense. There are not a lot of guys who have taken me down.”

Lamparelli had built up a lot of recognition statewide coming into the district and region tournaments.

“It feels good. It comes from hard work,” Lamparelli said. “I can’t let it be a distraction. I have to stay focused.”

Five other region qualifiers did not advance from the opening round of the region tournament, but all will return next season: freshman Matt Paglia (126 pounds); sophomores Drew Romein (138), Nick Campbell (182) and Harrison Hill (heavyweight); and junior Nolan Pecci (160).

Deon Hoernlein and Kassidy Mulryne both returned to the NJSIAA Meet of Champions (MOC), where they earned medals Feb. 26 at the John Bennett Indoor Athletic Complex in Toms River.

Hoernlein finished sixth in the 3,200 meters in 10:58.70 — a time much faster than her mark of 11:15.90 in the Group III championships for seventh place the previous weekend, which was good enough for a wild card selection to the MOC.

Mulryne was fifth in the high jump, clearing 5-4 despite nagging back soreness. It was 2 inches below the winning height. Mulryne reached the MOC with a fourth-place jump of 5-0 in the Group III meet.

Allentown (8-15) snapped out of its late-season slump with a nonleague victory Feb. 23 over neighboring New Egypt High School, 49-48.

Allentown looked to avenge a pair of lopsided regular-season losses at Nottingham when it traveled there Feb. 28 for its NJSIAA Central Jersey, Group III opener. Allentown also lost, 87-61, Feb. 20 to Pennington High School.

The Robbinsville-Allentown Ravens lost to top-seeded Morris Knolls High School in the second round of the NJSIAA Public A tournament Feb. 23 at Mennen Arena in Morristown to fall to 14-8-1.

The Ravens had won their state tournament opener, 3-0, Feb. 20 over Montgomery High School, as Brian Eider and Joe Pontrelli scored goals in the second period and Shawn Camisa capped the scoring early in the third period. Nick Koch made 30 saves in goal for the Ravens.