MANALAPAN — Joe Eisele walked into the Newspaper Media Group office last week and before he could even take off his coat and unlock his office door he was discussing business.

Within six short months, Eisele went from his position as publisher of the Sun Newspapers to overseeing five weekly newspapers for Newspaper Media Group to his current role as publisher of 16 publications for the new company.

“It’s been a whirlwind,” Eisele said of the transition. A whirlwind he enjoys as he helps shape the media landscape in Central New Jersey.

Under Eisele’s direction, the Packet papers and the former Greater Media papers have already integrated web properties for all of their publications into centraljersey.com with a coverage area that he has dubbed from “the river to the shore.”

Eisele said it began with Donnelly, whose Donnelly Distribution was distributing circulars in Philadelphia, reaching nearly 900,000 homes every week.

“[Donnelly] decided to start the company Newspaper Media Group and his first acquisition was Broad Street Media and its affiliates [in July 2016],” Eisele said.

A few months ago, Eisele’s duties were broadened to include additional 10 weekly newspapers — North-South Brunswick Sentinel, Edison-Metuchen-Woodbridge Sentinel, East Brunswick Sentinel, the News Transcript, Tri-Town News, the Examiner, the Suburban, The Hub, the Independent and the Atlanticville. Those papers,  formerly of Greater Media Newspapers, were sold to Newspaper Media Group in October 2016.

“I was sitting in a meeting yesterday and I was looking around and just a year ago, all these people used to be competitors … now we are all on the same team and it has been fun to see that.”

Eisele said each publication has brought its own strengths and uniqueness to the table and have complemented each other well.

Together, the publications in South and Central Jersey, Philadelphia up to Staten Island, N.Y. reach 1.7 million homes every week and their websites have thousands of opt in subscribers, Eisele said.

And within the next six months that reach is expected to grow.

Exciting things are ahead in 2017 for Newspaper Media Group, Eisele said.

“All papers already got a fresh new look,” he said. “We enhanced our distribution model for Packet Media Group allowing us to get our papers into more hands.”

Another exciting venture is the company getting into the community more often, which Eisele said would bring value to their advertisers and readers.

A Chocolate and Wine event was held at Branches in West Long Branch, Monmouth County, on Jan. 28. In February, a Health and Wellness Expo was held at the Princeton MarketFair.

On March 26, a Home Show will be held at the Princeton MarketFair and in addition more food events, pet events and even an Easter egg event are in store with dates to be announced.

Eisele said company wide they have held a Taste of Philly, Pizza Palooza and this year Football Stories is hosting a National Football League (NFL) draft party on April 27 since this year will be the first year the NFL draft will be held in Philadelphia.

Like the culture he brought to The Sun Newspapers, Eisele said he brings his positive attitude and team player mentality to the Central Jersey papers where he oversees more than 40 employees.

“I wear many hats,” he said. “Also, I’m not only the publisher, I’m the backup in the finance department, I work hand in hand with the sales team, which is led by Michele Nesbihal, I meet with advertisers and help train new hires, get deals done with vendors and advertisers, I work with our corporate office in Cherry Hill on sales and marketing initiatives. I work with Donna Kenyon, who is our executive editor, on a daily basis making sure our content is focused in the right direction. I like to have my hand in everything.”

Eisele, who said sitting at his office in Manalapan is not his style, said his days are different and send him throughout the publication’s news coverage area from the river to the shore.

Eisele said as the Newspaper Media Group comes into its own, to measure the success of it is to look down the road and see his people move up the ranks in the company.

“That will define my success,” he said. 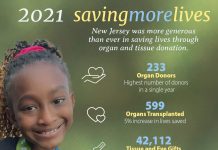