Atlantic Resolve is a demonstration of continued U.S. commitment to collective security through a series of actions designed to reassure NATO allies and partners of America’s dedication to enduring peace and stability in the region in light of the Russian intervention in Ukraine.

Since April 2014, Army Europe has led land forces on behalf of the U.S. military, by conducting continuous, enhanced multinational training and security cooperation activities with allies and partners in eastern Europe. These activities are taking place in Estonia, Latvia, Lithuania, Poland, Romania, Bulgaria and Hungary.

Atlantic Resolve demonstrates the U.S. commitment to the security of NATO allies on air, land and at sea. To ensure its own security, NATO must have strong, committed and capable allies, which is why the United States has fought, exercised and trained with its European allies for the past 70 years. The U.S.-European strategic partnership is built on a foundation of shared values, experiences and commitment to a Europe that is stable and prosperous.

Burgado is the son of Gladys and stepson of Waldimar Font of Long Branch and father of Esteban, Elijah and Zayda. 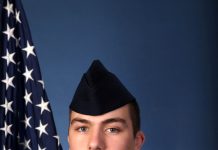