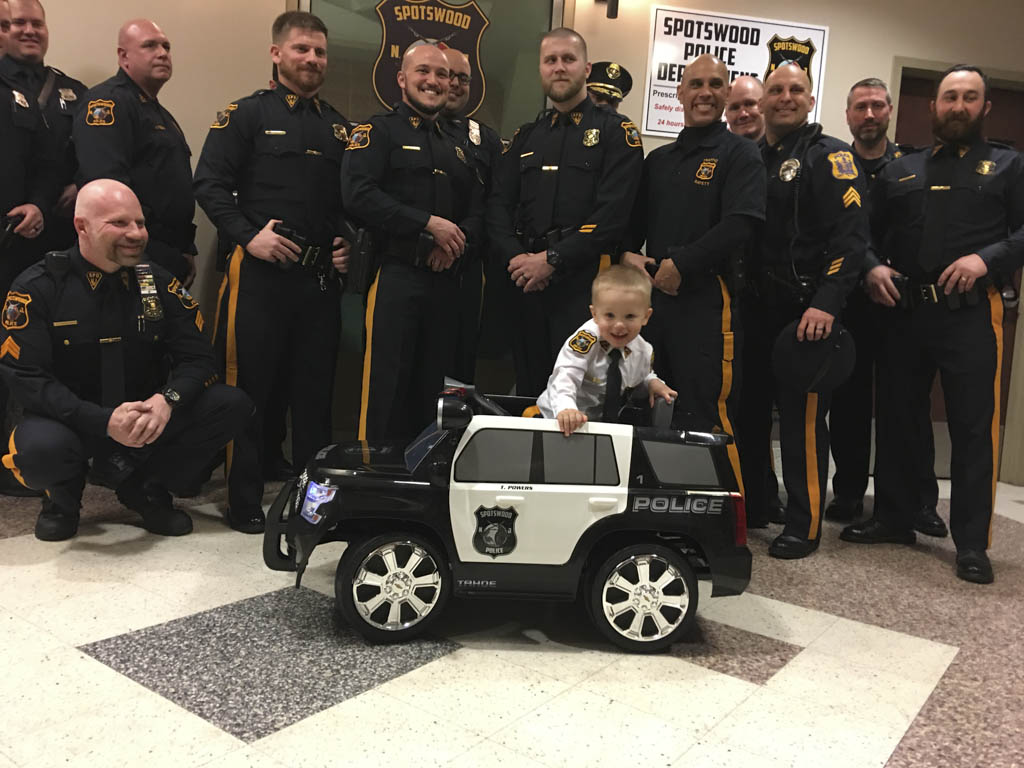 SPOTSWOOD — Given a uniform, a badge number and his own toy patrol car, 2-year-old Trent Powers of Helmetta was made an honorary officer by Chief of Police Michael Zarro and his fellow officers from the Spotswood Police Department during the Borough Council’s semi-monthly meeting.

Accompanied by his parents Kimberly and Trevor Powers, Trent was officially sworn in as an honorary patrolman and given badge number 50 on March 20 at the municipal court located on 77 Summerhill Road.

Trent was born with a rare and incurable disease called Duchenne Muscular Dystrophy (DMD), which affects one in every 3,500 boys born each year. This 100 percent fatal disease causes progressive muscle weakness that ultimately leads to life-threatening heart and lung complications. The average lifespan of a child suffering from DMD is mid-to-late 20s. Trent attends therapy three to four times per week and that will only increase as he grows older. He is constantly visiting different doctors across the nation for the best treatment possible, according to powerspromise.org.

Learning about Trent’s story, both the Spotswood and Helmetta police departments launched the growing “winter wool” campaign during the months of January and February when officers did not shave their facial hair in order to raise money for Trent, according to the Spotswood Police Department’s FaceBook page.

After Trent was officially sworn in as a member of the Spotswood Police Department, he was presented with his own customized toy patrol car.

“We are honored that they made such a special night for Trent. We are extremely grateful for the funds that were raised, but even more grateful for a night of memories that we will all cherish forever. It truly is amazing to see the kindness and support that our community has shown us, and we are very fortunate to have the local police departments leading the way,” Kimberly Powers said.

For more information about Trent’s story and about DMD, go to powerspromise.org.