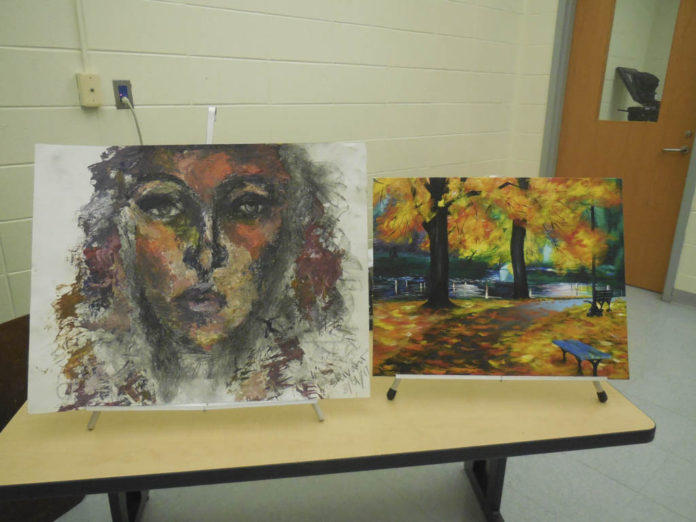 SOUTH BRUNSWICK – The talent in the South Brunswick School District is limitless.

During the evening of March 23, six students from South Brunswick High School were chosen to be the cover artists for the South Brunswick School District Calendar & Information Guide for the 2017-18 school year, which will be distributed on the first day of school in September to all students in the district.

Ashley Gomez, Allyson Smith, Amanda Scattergood, Noopur Shah, Dhruvi Rajpopat and Shivangi Singh were chosen by their art teachers based on being “the best of the best,” according to teacher Cassandra Stedina.

Ashley chose to draw one of the girls in her class lying on a table. Using a pencil, the junior sketched the live model in black and white as part of a foreshortening assignment in her Drawing II class, designed to show depth perception.

“I don’t consider myself a great painter, but I can do a lot with a pencil,” she said.

Allyson also completed a foreshortening project for her Honors Portfolio I class, taking a photo of herself and sketching it, making her sneakers look larger in the foreground of the canvas. This was her first attempt at a self-portrait, as well as at a charcoal sketch.

“It’s cool to know it paid off,” she said of being chosen for the calendar.

Amanda, who said she has been a fan of Impressionism since her sixth grade French class, took on a landscape painting using acrylic paint on a small canvas for her Art I project.

“I decided to go a little bit out of my own boundaries and blend Realism with Impressionism,” the sophomore said. “I wanted to layer the color but still have it look realistic.”

She created a valley with a volcano just about to erupt, surrounding by smoky clouds in the sky as the sun is setting, reflecting into a stream.

“The Calm Before the Storm” was focused on “shadows and contrast rather than the brightness of the scene” she had modeled her painting after.

“The darker colors capture more of the gravity of the natural disaster of what is about to happen,” she said.

Noopur’s objective was to sketch shiny objects with charcoal for her Art I class, setting up utensils her teacher had brought in and drawing a fork and spoon reflecting into a mug.

“I wasn’t expecting much from it,” she said of “Reflection of Light,” noting that this was her first attempt at a charcoal piece. “After taking this class, I take art more seriously and I am thinking about my career.”

Dhruvi, a sophomore, painted a park scene in acrylic paint for her Painting I class.

Shivangi, a junior, used charcoal and acrylic paint to create a beautiful, mixed media painting of a face.

The first district calendar and information guide was published in the 2004-05 school year. Artwork from the art gallery, which was founded by Assistant Superintendent Joanne Kerekes, was included in the 2005-06 calendar, according to Regina Barbely, administrative secretary for the South Brunswick Board of Education’s Office of Curriculum and Instruction.

“I think the district has always held the arts to be very, very important. Not only artwork, but music and the performing arts. Our art teachers are high quality. They bring out the best in the students … and they encourage them where they think they will succeed,” Barbely said.

In addition to being featured in the calendar, the students have had their artwork featured at the South Brunswick Municipal Building’s Gallery of Art. One artist from each school will also be included inside the calendar. They will also be honored at a Board of Education meeting in September.

Furthermore, the district partnered with librarians at the South Brunswick Library for South Brunswick Reads, this year choosing the theme of community reading. Students at both middle schools created windmills based on the book “The Boy Who Harnessed The Wind.”