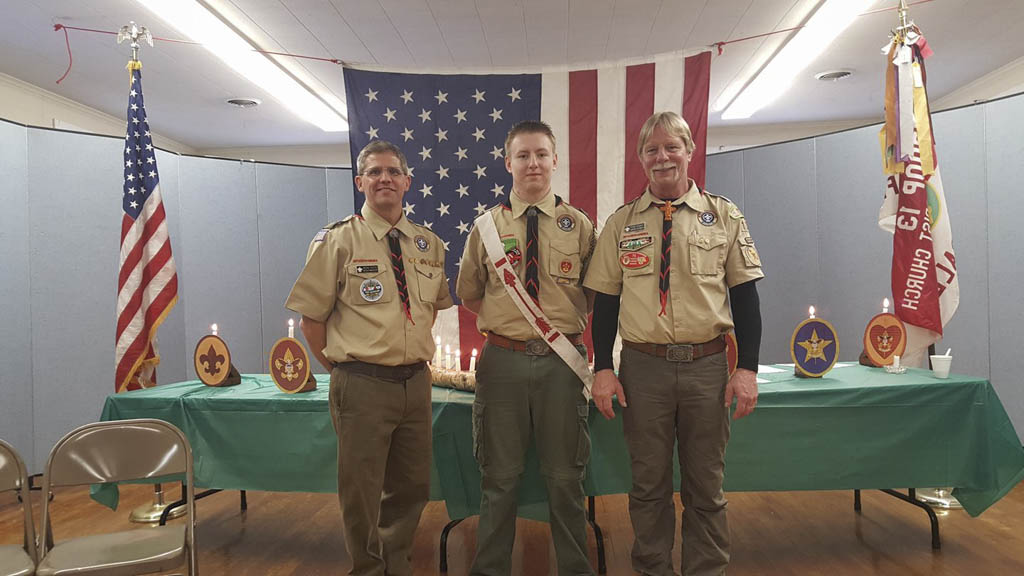 FARMINGDALE – An Eagle Scout candidate from Farmingdale has built a ceremonial fire pit at Borough Hall which will be used to conduct flag burning ceremonies during which worn out American flags will be properly and respectfully retired.

Eric Sundberg, 18, the son of Kristin and Frank Sundberg, said he wanted to build the fire pit to show his appreciation to the nation’s veterans.

“I chose my project after about a month of (considering) different ideas and talking with some people from Farmingdale and getting inspiration about other types of projects online,” the young man said.

“I have had a high respect for the armed forces ever since I was little, talking with my grandfather who was in the Marines in the Pacific during World War II and hearing some of the stories he left on tape after he passed. So my main idea was to use my (Eagle Scout) project to show my appreciation to veterans,” Sundberg said.

The first flag burning ceremony at the fire pit is expected to take place on Flag Day, June 14,  he said.

Sundberg, who has been involved with scouting for 10 years, said, “I believe wholeheartedly that my project was a success and will benefit the community by educating people about the proper way to dispose of a flag, showing honor to their country’s flag and to the men and women who defend it.”

The young man said he hopes to have his Eagle Scout Court of Honor ceremony in early June.

Sundberg is a senior at Howell High School. He plans to pursue a career in mechanical engineering.

“I plan on staying and helping with my local Boy Scout troop (Troop 13) by going on camping trips (and) helping younger scouts advance. My plans are to go to Brookdale Community College for mechanical engineering for two years and advance to the New Jersey Institute of Technology for the rest of my engineering education,” he said.

Sundberg’s Eagle Scout project was recognized by Mayor James Daly and members of the Borough Council during an April 4 meeting. Municipal officials passed a resolution accepting and recognizing the project.

Daly said the borough has flags in its possession that need to be retired in the appropriate manner.