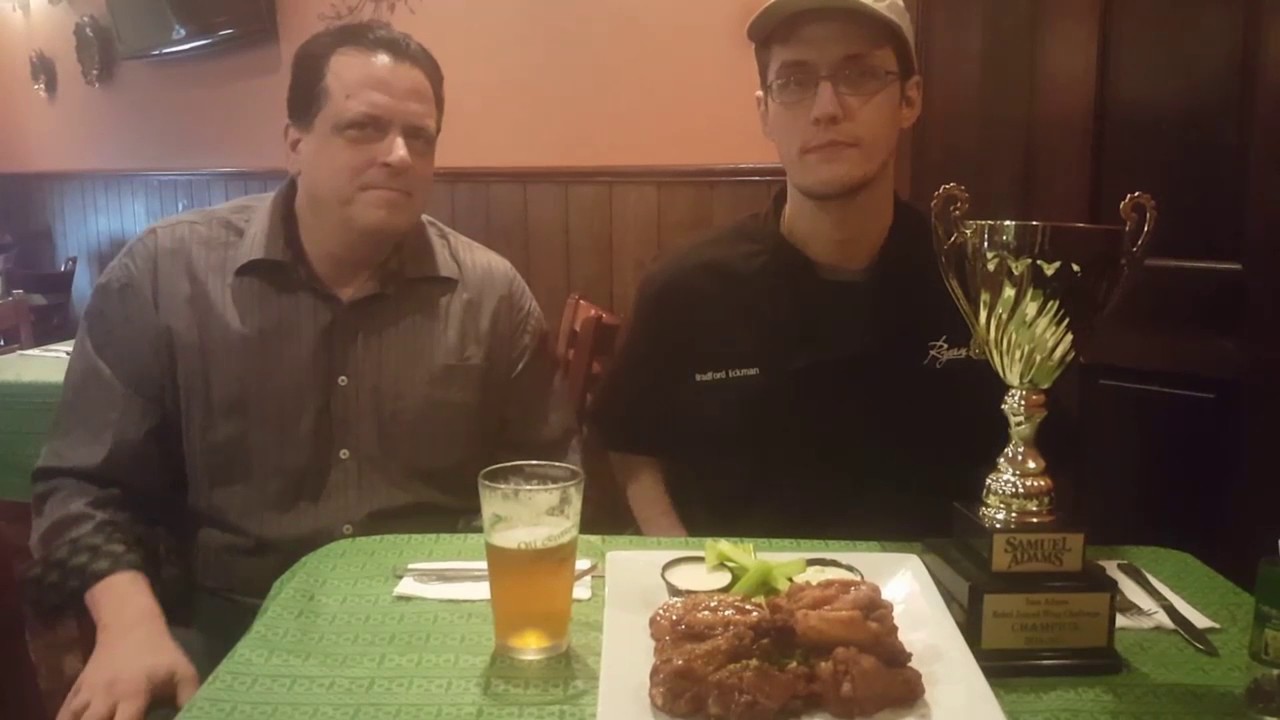 MONROE — Chef Brad Eckman takes his chicken wings so seriously that he has a tattoo on his leg to show for it.

So when the sales representative from the Boston-based Samuel Adams beer company told him in the fall about the Garden State Wing Challenge contest, which set out to find the best wing sauce to pair with their new Rebel Juiced IPA, Eckman, with the support of Michael Lavanco, owner of Ryan’s Pub and Sports Bar in Monroe, did not hesitate to participate.

“It’s a more tropical taste,” Eckman said of the IPA, which is described as an American IPA style beer jam-packed with juicy, citrusy hops and mango juice.

So with that in mind, the Spotswood resident spent about a week experimenting what would be the best sauce.

“I had been experimenting with the flavors I used in the sauce when the contest kind of fell in my lap,” he said.

Eckman said the sauce he made is a blend of guava, mangoes and habanero peppers.

“When first trying Rebel Juiced, I noticed the fresh mango taste with hints of other fruits,” he said. “From there, I built the sauce and included the beer in the recipe to complement the aroma and flavor of the beer. I added cinnamon to add to the maltiness and cumin to bring out the mild hoppy taste. This sauce should mimic the sweetness and slight hoppiness of Rebel Juiced with a sweet and lingering heat.”

On March 22, Eckman and Lavanco traveled to the Boston brewery with the other participants for a cookoff.

“They had a food truck rather than a kitchen,” Eckman said. “I already had the sauce made, but we fried the wings there.”

The panel of judges included sales representatives and people who work in the brewery laboratory.

Ultimately, the sauce that Eckman made won the contest and took home a trophy from Samuel Adams Company.

“It has been a great accomplishment,” he said.

Eckman and Lavanco said it was a great experience touring the brewery and meeting the other contestants.

This is the second contest that Ryan’s Pub has entered and they won both contests. Last year, they had entered a wing contest through a local radio station.

“An employee of the radio station is a customer here and told us about it,” Eckman said. “The contest for Samuel Adams was on a much bigger scale and helps get our name out there.”

Eckman has been the chef at Ryan’s Pub for about five years of the pub’s 30-year existence.

“Our bar has a ‘Cheers’-like vibe,” he said. “There’s an eclectic mix from our blue collar customers to our families. The bar can see a 21-year-old and a 90-year-old.”

Lavanco, of East Brunswick, became the owner of Ryan’s two-and-a-half years ago.

“We promote a family and friendly environment,” he said.

Lavanco and Eckman said they offer specials everyday and on the weekends they have entertainment from local bands, trivia and karaoke to game nights including Texas Hold’em and darts.

“We are known for our wings, pizzas and burgers,” Eckman said. “We have 15 different sauces for our wings and I am always experimenting and taking suggestions.”

Lavanco said their busiest time is from Thursday through Sunday.

Eckman said for the most part all the food they make is made from scratch.

“We cook to order,” he said. “I care about the quality of the food that we serve.”

Lavanco and Eckman said they also try to keep everything local, meat purchased from J. Vrola Meat Company in South Amboy, and the restaurant utilizes a graphic design business that is next door.

Ryan’s Pub and Sports Bar is located at 299 Spotswood Englishtown Road. For more information, call 732-251-1709 or visit its Facebook page.