Stops in Metuchen, Sayreville to honor those with ALS 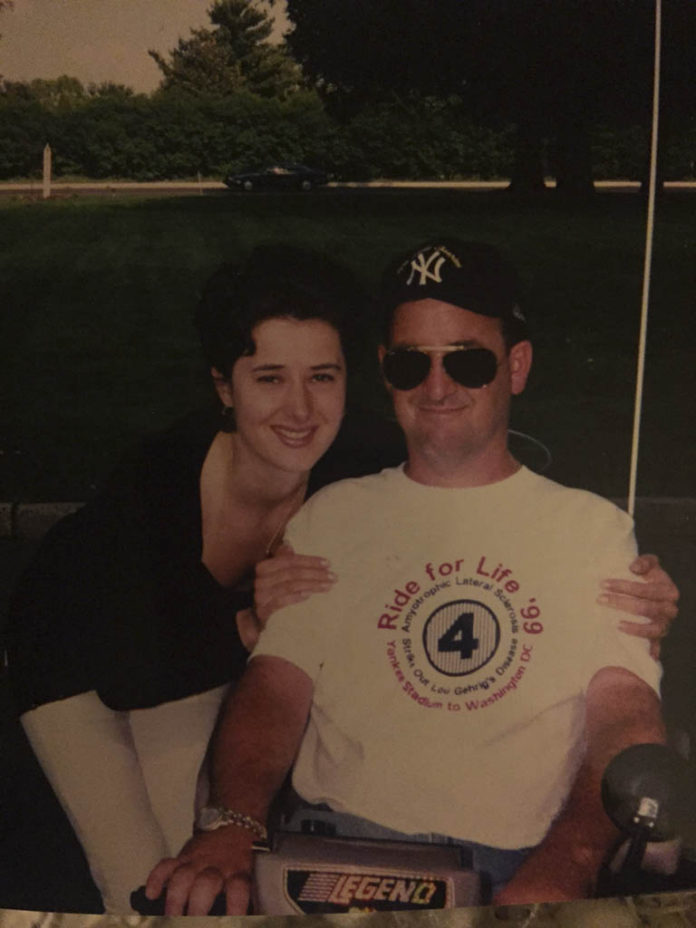 METUCHEN — For Jennifer Wielage, the disease ALS robbed her of the life she was about to start with her then-fiancé, Clint Myers, 20 years ago.

ALS, or amyotrophic lateral sclerosis, is a progressive neurodegenerative disease that affects nerve cells in the brain and the spinal cord.

On May 6, Wielage, of Edison, will join Ride for Life, a wheelchair ride from Lou Gehrig’s gravesite in New York – ALS is also known as Lou Gehrig’s disease, named after the famous New York Yankee who died from the disease – to Washington, D.C. The group will make a pit stop in front of Metuchen Borough Hall as they celebrate the 20th anniversary of coming together to raise money for research and making legislative advances for ALS patients and their families.

The wheelchair riders will be greeted by Mayor Peter Cammarano and his father, Deacon Frank Cammarano from St. Francis of Assisi Cathedral.

The founder of the Ride for Life, Christopher Pendergast, now on a ventilator because of the disease, will be on hand as well.

Metuchen is one of the stops along the route from New York to the nation’s capital. The mayor will give a proclamation declaring May ALS Awareness Month in the borough.

There will be supporters and family members to greet the riders and a small ceremony with musical accompaniment by Sydney Sherwood, a guitar player and singer.

The riders will travel with walkers and an entourage of support vehicles, escorted by local police.

After the small ceremony in Metuchen, they will stop in Sayreville to meet Mayor Kennedy J. O’Brien, whose son suffers from ALS.

Wielage said when her fiancé was diagnosed with ALS they learned of Ride for Life and they participated in the ride for a few years before he passed away in 2001 at the age of 42.

“Clint loved challenges,” she said. “At the time, he was far along in his diagnosis and was not able to speak or had use of his legs. I was there for him a few days and Clint’s brother helped him through the Ride for Life, which was a two-week trek. I was so proud of him.”

Wielage said she met Myers in 1994 when she was 23 years old. She said when she met him, he had two young children from a previous marriage.

“Three years later we were engaged,” she said.

In 1997, Wielage said she started noticing a few signs that led to Myers’ ALS diagnosis.

“He picked me up for dates and he’s telling me that rather than gaining strength in his arms at the gym, the strength had been decreasing,” she said. “He was in his 30s and I thought that was very peculiar at the time. We thought maybe he had carpal tunnel syndrome.”

Wielage said one other tell-tale sign was he could not turn the ignition to start his car.

“I had to turn the ignition for him. … I just thought he had this weird hand problem,” she said.

Wielage said her former fiancé was an active mountain climber and really into sports. He was a geologist and owned his own consulting company.

“Clint had realized something was wrong and it must be more than carpal tunnel syndrome when both his hands were impacted with muscle atrophy,” she said. “That’s when he went to a neurologist and received the diagnosis of ALS.”

After some time digesting the news, Wielage said her fiancé came to a real peace with the diagnosis.

“He had two young daughters and kept seeing them,” she said. “They saw their dad walking, using a walker then a wheelchair. … It must have been so hard to comprehend what was going on.”

Melissa Brennan, Myers’ daughter, is now 28 years old and helping  with the kickoff of Ride for Life in Metuchen.

Pendergast said the most important legislative advance was made in the late 90s after a couple of years of Ride for Life trips and lobbying by the patients.

“Social Security benefits were sped up and diagnosis of ALS was an automatic qualification,” he said. “In the years since, several other laws helping patients with ALS were approved.”

Pendergast said one of the laws was the establishment of a national registry, which enabled for the first time the gathering of demographic information about the disease.

“This provides researchers with critical information about rates, ages, common links and survival time,” he said.

In 1997,  Ride for Life traveled from Gehrig’s gravesite to Washington. In 2001, Pendergast said the group switched its focus to the New York metropolitan area in order to better organize and support the trip. However, for the 20th anniversary, the organization decided to go back to where it all started to celebrate the anniversary.