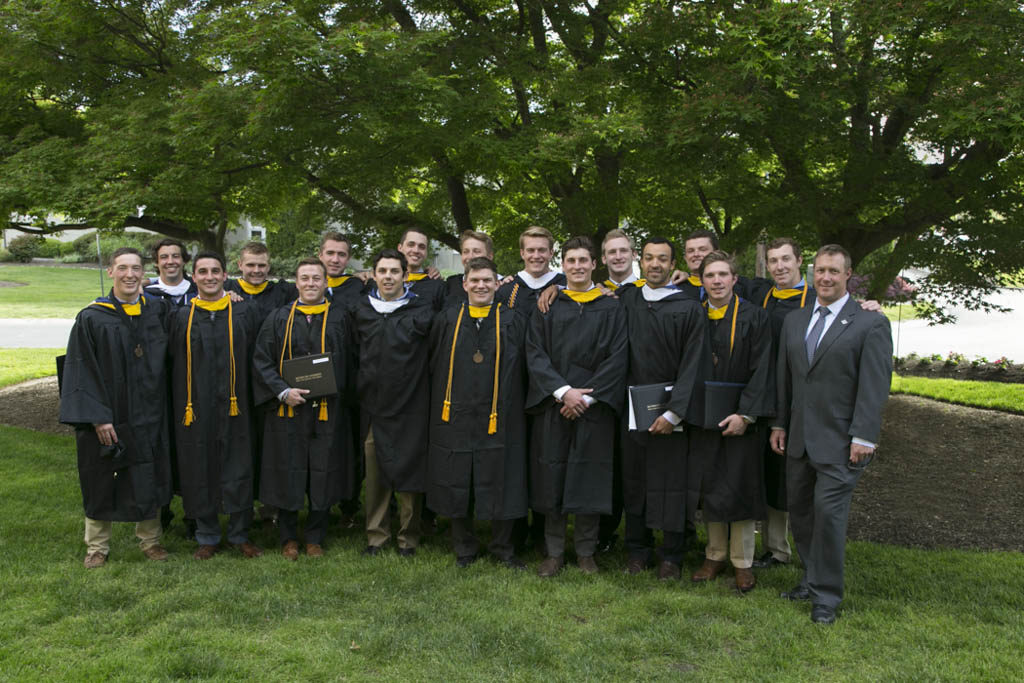 The best season that the Monmouth University men’s lacrosse team may have ended in a loss but 22 senior players will cherish what happened to them off the field.

Monmouth’s men’s lacrosse team, in just its fourth year of existence, had qualified for its first appearance in the NCAA Tournament and opened with a national game on May 10 at Bryant University in Rhode Island.

But there was one slight problem.

On May 10, the seniors from the team were scheduled to participate in Monmouth University’s graduation ceremony at the PNC Bank Arts Center in Holmdel.

So instead of walking with their classmates the players missed the ceremony.

Instead, they were many miles away in Smithfield, Rhode Island, where they competed in the national tournament.

Monmouth University decided to hold a special ceremony for the team on the next day, May 11, in the Pollack Theatre, which is located on campus in West Long Branch.

The team was welcomed by a crowd of family and friends as Monmouth University Interim President Grey Dimenna praised the team for the effort and excitement that the program brought to the university this spring.

“We believe in you,” Dimenna said.

According to Monmouth University Director of News and Public Affairs Mark Blackmon, the idea for the special ceremony was a collaborative effort by Dimenna and some of the college’s vice presidents, which included Athletic Director Marilyn McNeil and Vice President of Student Life Mary Anne Magy.

Dimenna had the final word on the matter and he immediately gave it his blessing, according to Blackmon.

The Hawks ended its finest season ever with a 14-4 record. The Hawks also gained national attention when they put together an 11-game winning streak. That streak was the longest to date this spring in the country.

Chair of the Board of Trustees Henry Mercer, who was also in attendance at the ceremony on May 11, also commended the players.

“This celebration is extra special for me because you are scholar athletes,” Mercer said. “I believe there is no better preparation for life than the combination of sports and education. So, speaking for all fans of Monmouth athletics, we’re proud of not just those of you graduating tonight, but of the entire lacrosse team.”

Senior Goalkeeper Nick Hreshko addressed the crowd, which was filled with family and friends of the players, on behalf of the team. He and his teammates thanked the university for supporting the lacrosse team.

“It’s been a long journey,” Hresko said. “I think i can speak for all the seniors when i say we really did save our best year for last.”