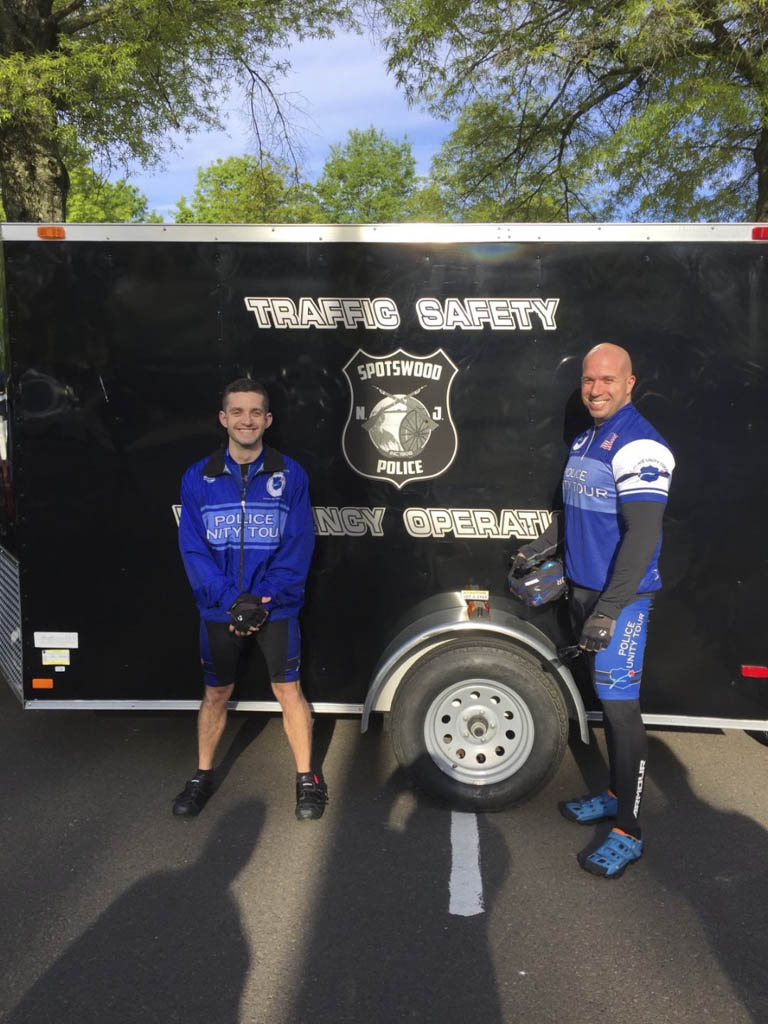 Two East Brunswick Township patrolmen and four Spotswood Borough officers formed a team and joined a legion of officers across the state as they rode their bikes from Mercer County to Washington, D.C., in a four-day, 300-mile journey to honor the men and women in blue who died in the line of duty.

East Brunswick Patrolmen Brian Woodruff and Christian Longhitano participated in the tour for the first time.

“The Police Unity Tour is a major event [where] officers from all over the country participate to help raise awareness and money for fallen officers and their families. I think the Police Unity Tour is an amazing cause, and since I learned about it I’ve wanted to be a part of it. This year we were fortunate enough to have our friends at the Spotswood Police Department help us organize and plan the logistics. This was a huge help since this was the first year Longhitano and I had participated. This year we formed a joint team of Spotswood and East Brunswick,” Woodruff said.

Spotswood Patrolmen Adam Sabatino, Stephen Gallo and Brandon Nemes and Sgt. Stu Pfeiffer participated in the tour, which ended in D.C. on May 12.

“I decided to participate in the 2017 Unity Tour to honor those who have fallen in the line of duty, giving the ultimate sacrifice to protect others, specifically my good friend Thomas E. Raji of the Perth Amboy Police Department who was killed by a drunk driver on Aug. 22, 2008, while Officer Raji was performing a prisoner transport. Officers from Spotswood and East Brunswick joined together to form a team for various reasons. The officers from East Brunswick were friends of the Spotswood riders, and they were in need of a team to ride with. It was an honor to have them with us,” Pfeiffer said.

While preparing for their long bike ride, Pfeiffer said that officers trained by doing miles of road work on their bicycles, coupled with working on cardio and leg strength in the gym.

“The tour itself was a long, hard journey. It required both physical and mental conditioning. The pride of completing the journey and seeing the support along the way and at the memorial itself was overwhelming. It is hard to put into words the honor that is felt to ride for those who have fallen and left their families behind to provide safety to others that they do not even know. The funds were raised in a combination of soliciting donors, fundraising at various local businesses, and by word of mouth with overwhelming support from friends, family, and the general public,” he said.

Woodruff said that once he and his teammates reached Washington, he he was amazed to see more than 2,200 officers ride into the national’s capital.

“The ride from Mercer County College to Washington, D.C., was simply amazing. The ride itself is over 250 miles and spans four days. The first day of the ride ended with Chapter 10 and Chapter 13 of the Police Unity Tour riding into Atlantic City. The entire ride took us through so many different towns and cities, so it was really something to see everything,” Woodruff said. “While on the ride, many people came out to show their support and cheer for us which was nice to see. The final ride into Washington is stunning, as over 2,200 riders go past the Capitol Building and through our nation’s capital. The ride ends as we go through the National Law Enforcement Memorial with supporters and police officers from all over the country showing their support.”

Each officer who participates in the tour is required to raise $1,850. This money goes toward the National Law Enforcement Memorial and to the Police Unity Tour, according to Woodruff.

“We simply could not have raised the money and completed the ride without the support and donations from our local businesses, friends, families, East Brunswick PBA Local 145 and Spotswood PBA Local 225. We all owe them a huge thank you, because it simply would not be possible without them,” Woodruff said.

Officers Longhitano and Woodruff have raised more than $3,600 which will support the National Law Enforcement Officers Memorial and Museum, according to a prepared statement from the East Brunswick Police Department.

For more information about the 2017 Police Unity Tour, visit www.policeunitytour.com.