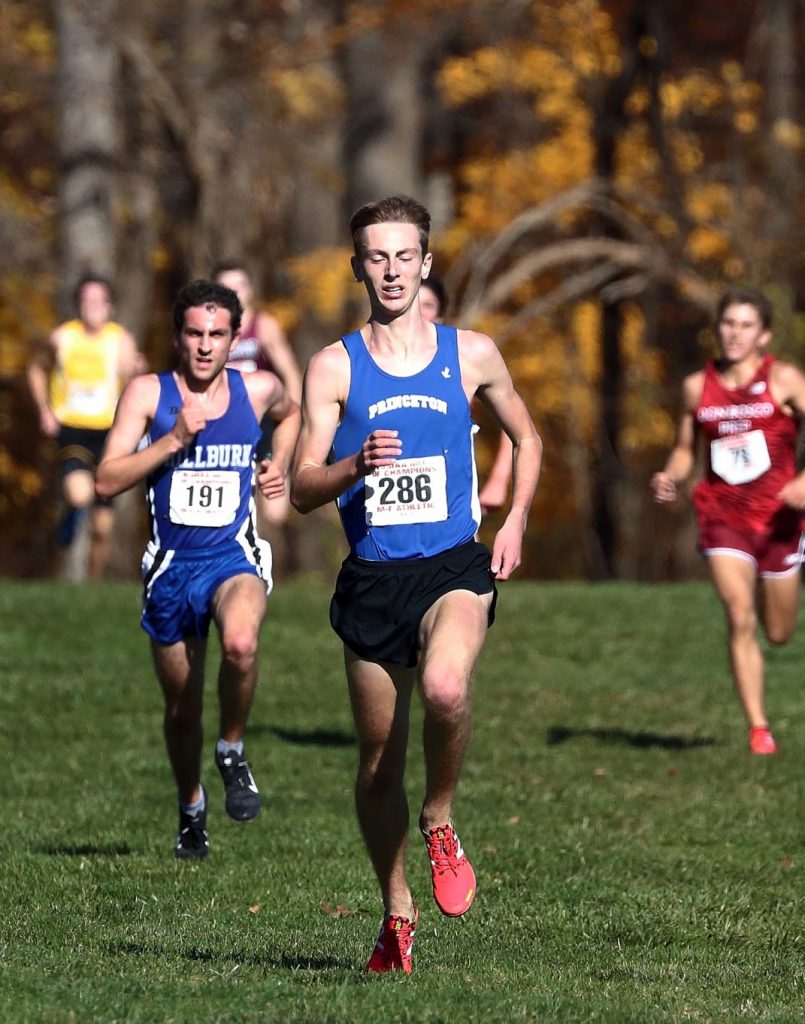 By Bob Nuse, Sports Editor
It’s been a long and successful year for the distance runners on the Princeton High track and field team.
After successful cross country and winter track seasons, the Little Tigers are coming down to the end of the spring track season and finishing just as strong as they started back in September. At last weekend’s Central Jersey Group IV meet, senior Alex Roth finished first in the 3,200 meters, with teammate Will Hare right behind in second place. Both advanced to this weekend’s state Group IV meet at Egg Harbor.
Roth was one of three individual event winners for the Little Tigers, capturing the 3,200 meters in 9:27.21. Simon Schenck won the pole vault with a 14-feet, 7-inch effort, while Paul Brennan won the discus with a distance of 173-feet, 5-inches.
In the fall, the Princeton boys won the cross country Meet of Champions. The group has carried that success through the winter and now into the spring, helping the track and field team to a third-place finish at the sectional meet. It’s been a long year but Roth and Hare are finishing strong for the Little Tigers.
“After winter track we took some time to build up our base,” Roth said. “I wouldn’t call it a slump, but we were in a building period and now we’ve started getting to the point where we are running well again. We spent a lot of time training to be ready for this part of the season."
Princeton finished third at the CJ IV meet, sending several athletes on to the Group IV meet this weekend. In addition to the three event winners and Hare, the Little Tigers also qualified Brennan with a fifth in the shot put, Hare with a third in the 1,600 meters, and Nils Wildberg with a fifth and Varun Narayan with a sixth in the long jump. Narayan was also sixth in the triple jump. Princeton finished fourth in the 4×800 with Nick Delaney, Jackson McCarthy, Alex Roth and Will Hare.
Roth was seventh in the 1,600 so he did not advance in that event. But he will compete in the relay as well as the 3,200, which is an event he has excelled in all season long.
“I think my time was okay," Roth said of his sectional race. "The race went out slow. It was a pretty solid effort, especially in the second mile after running two events the day before. I was happy with the performance with the circumstances.
“Being able to double is very tough, but important. I did that triple last year and I have run the the 1,600 and 3,200 many times in dual meets."
Roth’s stellar career as a Princeton distance runner will be coming to a close this season. He’s had an outstanding senior season but won’t take time to reflect on his career until after taking care of business down the stretch of the season.
“I do think about that sometimes, but I am just trying to focus on the race ahead and not let my head get too clouded worrying about other things," Roth said. "If want to come through these next two meets mentally prepared for the meets."
Roth is excited to be heading to Egg Harbor with several of his teammates who also have a chance to get through to the Meet of Champions.
“We had some jumpers go through," Roth said. "They pulled through. We all try to support each other. It is tough to be able to watch everybody while we are doing out own events but we all pull for each other."
The Princeton boys finished third in CJ IV with 54 points, trailing only Franklin and Old Bridge
The Princeton girls finished 17th in CJ IV. Jackie Patterson was fifth in the 400 meters and seventh in the 800 meters. The Little Tigers were also fifth in the 4×400 relay with Patterson, Justice Taylor, Colleen Linko and Michelle Vassilev