Jackson Liberty High School’s baseball team showed its fighting spirit all the way to the end of its 17-10 season.

The Lions were eliminated in the New Jersey State Interscholastic Athletic Association Central Jersey, Group III semifinals by Neptune High School, 8-7, May 30 when their last-inning rally came up short with two runners in scoring position on their home field.

The Lions threatened with two outs and trailing, 8-6, when Kyle Tavaska walked and Shane Hickey slapped a single before David Melfi drove in Tavaska with a base hit to cut the margin to one run. An errant throw allowed both baserunners to advance before Alex Torres grounded out to first base to end the game.

Neptune, meanwhile, had a misleading 10-12 record with the victory, going 3-6 in one-run games, as both teams played at their best at the end of the season. Neptune went on to lose a wild championship game in 10 innings, 4-3, to Allentown High School in the sectional finals.

It brought to an end a season with many highlights down the stretch for the Lions, including a 4-3 upset victory May 26 over Steinert High School in the prior quarterfinal game. Kevin Ritz pitched 5.1 tough innings, allowing four hits, and Connor Keenan drove in two runs.

“All in all, we had an outstanding season, and the future is certainly bright for Jackson Liberty baseball,” Jackson Liberty coach Jim Rankin said. “We advanced in each of the three tournaments (Ocean County, Shore Conference and state) and notched big nondivisional wins over Toms River South, [3-1], and Toms River North, [7-2].

“We had a rocky stretch in the middle of the season, which required a little bit of soul searching. I thought this group came together nicely during the back end of the season. Our team chemistry really started to take shape. ”

Seven of nine starters return, and Charlie Rudderow will be back after missing the season because of surgery. The top four pitchers also will return, although Andrew Ludovico and Matt Piro, who turned in some key innings on the mound, graduate.

“The bar is going to be set very high next season,” Rankin said.

Rankin said he will miss Tavaska, a four-year starter in center field who was “the glue that kept this team together,” and Hickman, who stepped into the starting lineup at second base because of an injured player.

“[Hickman] found a way in every game to contribute positively to our efforts,” Rankin said. “When he hit the three-run home run in our 8-7 season-ending loss to Neptune, the vision of him rounding third base as pumped up as he was will be something I will never forget.”

Jared Carroll and Chris Matragrano were contributors off the bench with a team-first attitude, Rankin said.

As for the returnees, Melfi finished with a school record of 35 hits, including 15 doubles, and had 27 RBIs. He was also reliable at catcher. He’s a member of the Shore Conference Carpenter Cup team along with Pickus, who has been the Lions’ ace the past two seasons.

Ritz and Nick DeCarlo also return with ample experience on the mound. 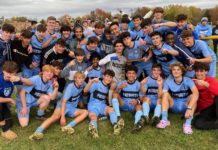 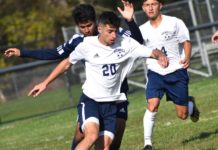