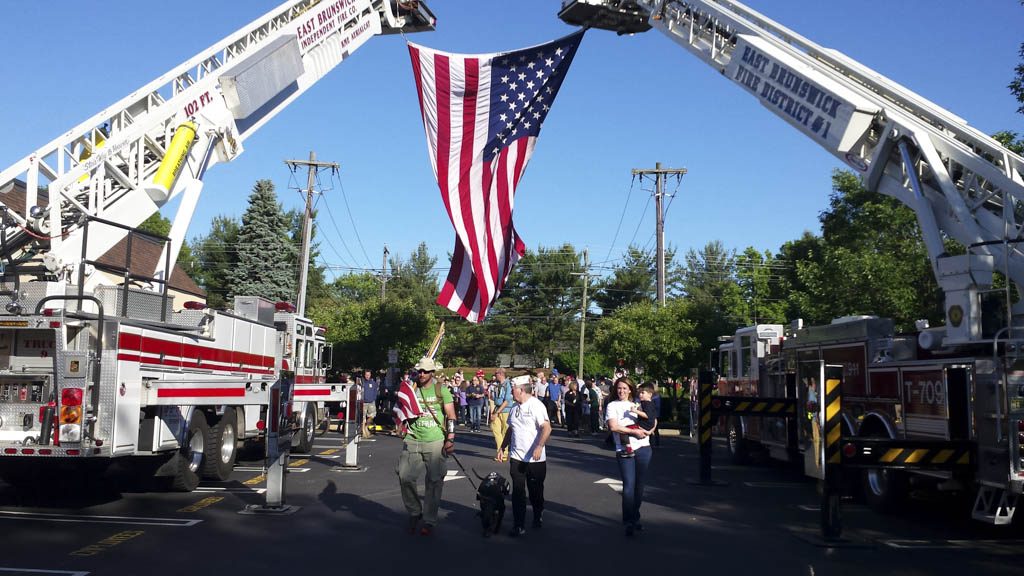 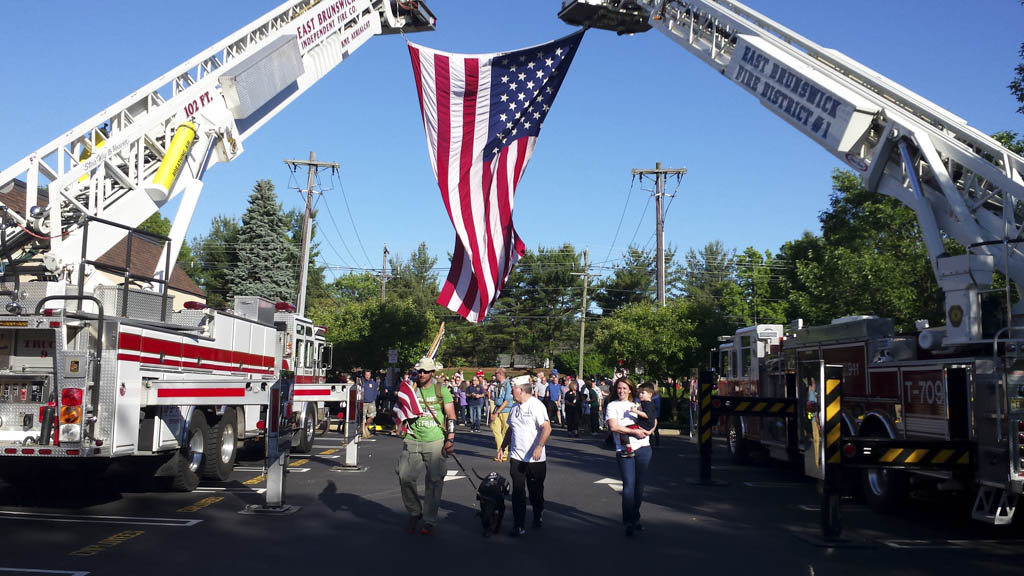 EAST BRUNSWICK On a mission to raise the public’s awareness about returning veterans suffering from post traumatic stress disorder (PTSD), Michael Dowens, the founder and president of Unbroken Warriors, walked from Washington, D.C., to the East Brunswick Memorial VFW Post 133.

“Unbroken Warriors is a nonprofit group of volunteers who have been impacted by PTSD whether personally or through supporting friends and family with PTSD. We work to fund residential level interventions for military veterans, regardless of their discharge status. We know how important and time sensitive PTSD care can be [and] it’s life or death for many,” Dowens said.

Equipped with two pairs of walking shoes, a photo of his family and sheer determination, the Holmdel resident began his walk on May 31 at the Vietnam Veterans Memorial in Washington and ended his journey on June 3 at the East Brunswick Memorial VFW Post 133, located at 485 Cranbury Road.

Dowens said he decided to start in D.C. due to the Vietnam War’s historical significance with PTSD.

“[I started at the] Vietnam Veterans Memorial [because] veterans from this war started the talk of being ‘shell shocked’ with such a stigma. It was important that I honor these veterans by involving this monument in my walk and leaving a flag behind for them,” he said.

He continued to say that his wife’s grandfather was one of the founders of Post 133.

“Post 133 is very special to my wife [Christine Dowens], my son, my wife’s family and me. Christine’s grandfather, World War II paratrooper and pathfinder John Keleman, was one of the founding members of this post. He has shared a lot with me about the purpose of the Veterans of Foreign Wars and why it’s a necessary group in the community. John brought me to this post after I discharged and helped me become a member. Tommy Coohill and Mike Goff are so connected with New Jersey veterans and help so many of them daily. I hope more people support the work of the VFWs in their areas,” Dowens said.

He estimated that he walked anywhere from 237-250 miles, depending on having to take detours.

“I did this walk last year, ending in Washington D.C. [and] beginning in New Jersey, and raised $30,000. Treatment is incredibly costly so I hope to match that number this year. My ruck is difficult but symbolizes the incredible weight PTSD afflicted veterans carry with themselves. I do this to get the conversation started about mental health and to start June, PTSD Awareness Month,” Dowens said.

After serving in the U.S. Navy on the USS Carter as a search and rescue swimmer, Dowens was honorably discharged in 2006. He became a Holmdel police officer in 2008.

“Through my own PTSD rehabilitation I realized the financial burden it can put on individuals and their families. Waiting for [Department of Veterans Affairs] approval for treatments that they deem appropriate can take an extensive amount of time with no guarantee of proper treatment. I hope my organization can help alleviate that financial stress for veterans willing to ask for help for their PTSD,” Dowens said.

During his walk, Dowens said that thinking about his family and how much they supported him throughout his recovery helped motivate him.

“[There were] thoughts of bringing my family peace. My recovery wasn’t easy and they didn’t give up on me. The pride they have in me for completing this and helping others makes it worth the challenge,” Dowens said.

“There’s so many forms of treatment that can make a difference in the lives of others. Help is available. I hope civilians will begin to understand veterans’ sacrifices for their protection. PTSD is a normal consequence to abnormal situations and there’s no shame in that,” he said.

Elizabeth Toth, president of the Ladies Auxiliary at Post 133, said she is “honored” that Dowens is ending his journey at his home base.

“I first learned about Unbroken Warriors in 2016 as the VFW post hosted a lunch and learn on PTSD and had members and their families attend to hear about the disease. Michael’s speech was amazing on how many our military men and women suffer with this disease and we just don’t do enough for them,” she said. “I’m proud that Michael is walking on behalf of the many men and women who suffer from PTSD and I hope he makes more aware of the daily struggles these military folks go through day to day. After all, they fought for our freedom.”

For more information about the Unbroken Warrior organization or to donate, visit www.unbrokenwarriors.org.