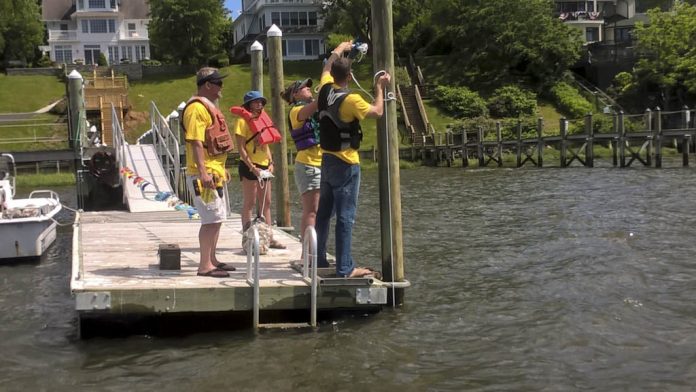 RED BANK Striving to enhance the water quality of the Navesink and Shrewsbury Rivers using one shellfish at a time, the non-profit organization American Littoral Society launched its latest experimental program “Operation Oyster.”

This summer the organization and its partners will begin the program to determine if oysters can still be found in the rivers’ waters. The project will involve hanging shell bags from docks. Those bags will then be monitored to determine if live oysters take up residence, according to a prepared statement from the American Littoral Society.

The American Littoral Society is a member-supported, coastal conservation non-profit that promotes the study and conservation of marine life and habitat, protects the coast from harm and engages communities to do the same through work in education, advocacy, and conservation, according to a prepared statement.

To kick off the program, members from the organization hung up two bags filled with empty oyster shells at the docks on June 2, near the Oyster Point Hotel located at 146 Bodman Place.

Members also hung up one bag at a privately owned dock along the Navesink River.

One bag is going to be added every month until the end of September, according to Pim Van Hemmen, assistant director of the American Littoral Society

“At this point [the organization has] approximately 60 people who have agreed to host shell bags, 35 of them have completed the paperwork and are ready to receive their bags,” David Hawkins communications manager for the American Littoral Society.

“Oysters are natural filter feeders. They suck water in and they take food out of the water, then they spit water back out. What we found is that the things that they take out that they grow on are things that are awfully harmful to the river system. So by putting the oysters back in the river it will help remove some of those harmful materials, mainly nutrients, that are contributing to issues that surround the Navesink River,” Tim Dillingham executive director of the American Littoral Society, said. “So, we are using nature to help clean nature up. Really all we are doing is trying to put things back into this river’s system that was there when mother nature created it that has disappeared unfortunately over the years. That’s why we call it restoration. We are putting pieces back that are missing from the ecosystem.”

Once a month the organization will monitor the bags and by the end of September it will do a final assessment and remove the bags from the rivers, according to Julie Schumacher the education and outreach coordinator for the American Littoral Society.

The bags are filled with shells from the organization’s “Shuck It, Don’t Chuck It” Oyster Shell Recycling Program, which has been spearheaded by Doug Douty, owner of The Lusty Lobster seafood company in Highlands and one of the organization’s trustees. A number of Monmouth and Ocean County restaurants participate in the shell recycling program, including Red Bank’s Oyster Point Hotel and Molly Pitcher Inn, according to an prepared statement.

“We started talking about this potential project and I said well ‘I can get the shells from my restaurants’ so the people I sell to, I ask them to save the shells for me so that we can start storing them out on Sandy Hook. So far we are successful and once [people] read a little more about it I think we will be more successful,” Douty said.

About a dozen restaurants in Monmouth and Ocean County participate in the organization’s Oyster Shell Recycling Program, according to Hemmen.

“[The organization has] had the shell recycling program in place for two years, that program, ‘Shuck It, Don’t It‘ is part of Operation Oyster,” Hemmen said.

The Navesink and other area waters used to be full of oysters and oyster reefs. Operation Oyster has the long-term goal of bringing those reefs back as a way to restore the health of area rivers, according to a prepared statement.

“The approach is one that is based on science that we have worked with over the years. We know how oysters live, we know what they need to live [and] right now we are kind of trying to find out where they might be hiding in the water and if their still here. We’ll use that information to guide where we’ll restore more oysters to help do the water clean up work.” Dillingham said.

Although Operation Oyster has various sponsors, the organization hopes to receive more funding to expand the program, according to Hemmen.

“We are very excited about launching this effort to help heal these rivers, I mean they have been suffering for a number of years now with water pollution problems. We think that putting the oysters who were once here back into this system will help resolve that problem and then the rivers will be much more available to people that live in the community,” Tim Dillingham executive director of the American Littoral Society said.

The American Littoral Society’s President Kathleen Gasenica said that the program helps get everyone in the community more involved in learning about nature.

“Just how thrilling it is – it’s a terribly exciting thing. We have been working on this for a while and it has evolved over a lot of our other projects and I think its also particularly exciting because it engages the community. We can’t do this by ourselves and its in the field, so it’s getting people back into nature. I am sure [everyone] is aware of we have had a downward spiral in that and it engages not only dock owners but [also] young people. We are doing this great education program now that will be associated with it,” Gasenica said. “So, for me [the program] shows what the organization has always done but finally branching it out so that it can be skilled to really involve a lot of people. I think right now in our political scene with the environment not being on the top of anybody’s priority in Washington D.C. that people are looking for something that they can do themselves, because [it] gives you a real sense that [they] are actually doing something.”

The organization plans on launching an educational module which is going to be offered for 7th grade science students at Forrestdale Middle School. It will educate them about the history of oysters, the life cycle of oysters, the health of the local rivers and what they can do to improve the river’s condition. It will include one or more field trips for hands on experiences, including the sampling of oyster bags, according to Hemmen.