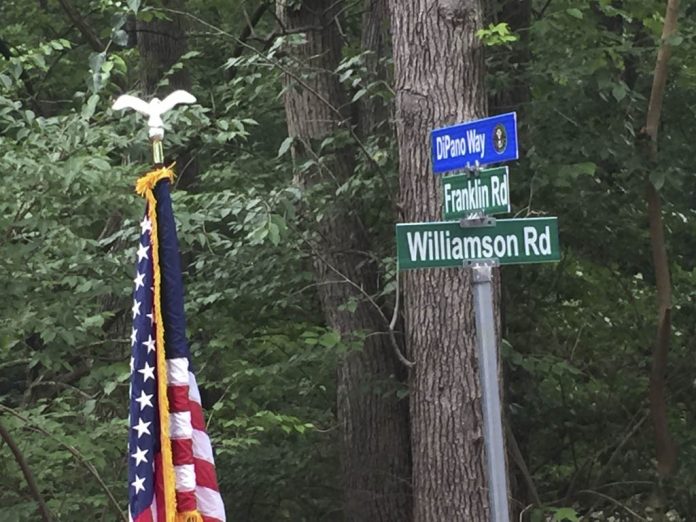 NORTH BRUNSWICK – Surrounded by dozens of her family and friends, Lou Ann Benson was able to honor her late father in a ceremony that was more than 10 years in the making.

Benson, the current director of the North Brunswick Department of Parks, Recreation and Community Services, has been part of dedicating streets in town to beloved veterans for years. Although she initially nominated her father, Lawrence DiPano Sr., in 2006, she continued to pull his name from the list.

She said Councilman Bob Davis finally told her that her father, who was a longtime North Brunswick resident prior to his passing in 2005, deserved to be recognized.

“Tonight is a little overwhelming for me,” Benson said during the unveiling of an honorary street sign at the intersection of Franklin Road and Williamson Road on June 5. “This was my bus stop. This is the street I grew up on. This is the house I grew up in.”

She recalled Fourth of July parties each year that required police visits – only to have the officers come inside, have some sandwiches and relax for a few minutes.

She also mentioned how Councilman Carlo Socio now lives in her childhood home on Franklin Road with children of his own.

Former Mayor Paul Matacera reminisced about being a young man from New Brunswick, trying to solicit election votes, driving through the neighborhoods of North Brunswick that did not have storm sewers at the time, and driving his car into a drainage ditch.

“Along comes this old pickup truck and this old guy in the construction business,” Matacera said. “He backs his truck up, ties a rope to it and pulls us out of the ditch.”

According to the proclamation read by Davis, Lawrence Raymond DiPano Sr. was born on March 8, 1919, to Vincent and Jennifer DiPano of New Brunswick before moving to North Brunswick for nearly 60 years.

At the age of 25, DiPano was one of the first seven men from New Brunswick to leave the area for service to the country. Sgt. DiPano served 33 months as a member of the 279th Signal Corps in the South Pacific. He received many service awards and notes of honor including the Good Conduct Medal and earned an honorable discharge, according to the proclamation. On June 4, 2005, Mayor Francis “Mac” Womack III presented a Medal of Honor from the Veterans Affairs to DiPano for his military service.

Lawrence DiPano was the owner and operator of L. DiPano and Company, an excavating business located in North Brunswick. He retired in 1990.

He married Louise Campolattano in 1946, and together they have four children: Vincent, Lawrence, Lou Ann and Michael.

Lawrence DiPano was 86 when he passed away in August 2005.

During the ceremony, DiPano’s four brothers were also honored, as all five DiPano men had served in the South Pacific at one time during their military careers. Pfc. Nicholas DiPano, at age 24, served for 36 months as a member of the Signal Corps. Sgt. Joseph DiPano, at age 23, served for 24 months; he landed in Hawaii where surprisingly he met Lawrence before leaving for the Philippines. He was with a tank destroyer unit. Pfc. Jerry DiPano, at age 21, was a medic in the 27th Infantry and received the Purple Heart and the Silver Star. Vincent DiPano, the youngest brother, was a staff sergeant in the Marines for 14 years. He served in Korea, Vietnam and the Philippines.

Prior to DiPano’s ceremony, the Lombardo brothers were honored with a street sign at the intersection of Antonio Drive and Ridgewood Avenue.

Joseph Lombardo was born on Feb. 9, 1923, in New Brunswick. He moved to North Brunswick during the Great Depression and attended public schools in town, according to his proclamation.

Lombardo was drafted into the U.S. Army on Sept. 9, 1943. He completed his basic training at Camp Croft in Spartanburg, South Carolina. He was a member of the “Red Bull” Division, the 34th Division Company A, 133rd Infantry, which fought in battles in Naples-Foggia, Rome-Arno and the Battle of Anzio Beachhead, Italy.

In July 1944, Lombardo was wounded by shrapnel in his arm and leg during battle. He recovered for three months before heading off to the front lines of battle again, according to the proclamation. Due to his previous injuries, he was unable to walk or fire his weapon effectively. He was promoted to the rank of Sergeant Technician 4th Grade and was reassigned to the 3485th Ordinance Outfit. His pre-war occupation as a mechanic prepared him for the role of repairing military vehicles for the remainder of his service with the Army.

He worked as an auto mechanic with his brother Rosario at a gas station in North Brunswick which led to their own business, Lombardo’s Auto Body, until 1966. He then worked for the Lincoln/Mayflower Moving Company as a representative followed by the North Brunswick Board of Education as a maintenance worker until his retirement in 1988.

He is also the last surviving member of the North Brunswick First Aid & Rescue Squad that he chartered with a group of men from North Brunswick. He has been active with the squad for 50 years, holding many positions, mainly as treasurer, until he retired, according to the proclamation.

Rosario E. “Jim” Lombardo was born on May 11, 1927, in New Brunswick before moving to North Brunswick.

He enlisted in the U.S. Navy in the Pacific Theater during World War II on March 21, 1945. He served on the USS Grayson for 13 months in Saipan as a First Class Seaman. He held other ranks such as Able Seaman, Seaman Second Class and Seaman First Class. He also completed recruit training and Maintenance Equipment School as part of his training with the Navy, according to his proclamation.

Jim Lombardo was honorably discharged on July 20, 1946. He was awarded the Asiatic Pacific Medal, American Theatre Medal and the Victory Medal.

After working with his brother at their auto body shop, he worked at Liberty Mutual Insurance Company as a regional senior damage appraiser. In 1984 he started and owned the Lombardo’s Appraisal Service. When he retired from his business, he worked for North Brunswick Township as a senior citizen outreach worker until his death in 2002.

He also helped establish the North Brunswick First Aid & Rescue Squad. An active member for 50 years, he served as president, captain, senior trustee and first aid instructor. He was the past president of the New Jersey State First Aid Council, 14th District and was the central regional vice president of the council. He also was influential in starting emergency medical technician training in Middlesex County.

Jim Lombardo was also the trustee of the North Brunswick Italian American Social Club and chairman of the Carnevale Italiano for many years, according to the proclamation.

He married Rose Vaccaro on June 27, 1948. Together they had two children, the late Salvatore James and Maryann, and four grandchildren, Christina, Cheryl, Danielle and Dominique.

The goal is to have 29 families honored this year with secondary street signs in North Brunswick. To nominate a veteran, contact Benson at lbenson@northbrunswicknj.gov or 732-247-0922, ext. 475.