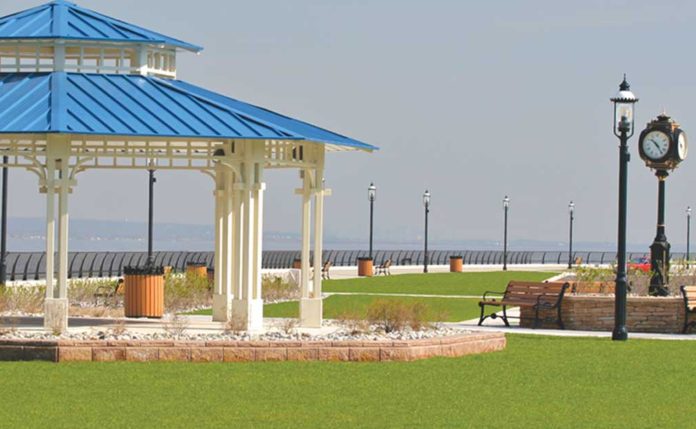 KEYPORT- Seeking additional funding to renovate and redevelop Main Street Park, the Borough Council approved a resolution allowing the municipality to submit its application for a Community Development Block Grant.

“Our plans call for a newly renovated T-ball field, an exercise station off the Henry Hudson Trail, a new modern and safe play structure and a modern state of the art skate park feature,” Borough Administrator Stephen Gallo said.

The council held a public hearing on the plan and grant application on June 20 during its monthly meeting at the municipal building.

“We decided to pursue upgrading this antiquated facility starting in 2014,” Gallo said.

The borough applies for grant funding from a variety of sources on an annual basis for many purposes. The federal government’s Community Development Block Grant funding is appropriate for this type of project, according to Gallo.

“We are anticipating spending about $425,000 on this project, all of it through grant funding,” Gallo said.

Currently the borough has $202,000 of its estimated budget amount, according to Gallo.

The borough is going to be notified in October if it has been approved to receive the grant, according to Gallo.

“We would then complete our final design [and] probably host a community meeting to review with citizens and go out to bid,” Gallo said.

Once the application was discussed and explained, Borough Attorney Karl Kemm suggested that the council make and vote on a resolution to authorize the application for the grant to the Monmouth County Office of Community Development.

After passing several ordinances, the council went into a closed session to discuss personnel and a contract negotiation involving Chief of Police George Casaletto, according to the council agenda.

Following the closed session the council reached an official decision.

“Yes, an employment agreement was approved with the chief. Casaletto has been without one since he became chief in 2012,” Gallo said.

The council also passed an resolution approving the employment and general release between the borough and Casaletto, according Gallo.

“Ok in a nut shell, our current Chief George Casaletto was promoted to chief on a permanent basis on August 7, 2012 after serving provisionally in the position. His initial base salary was $112,000. He has been without an employment contract since that time. The agreement approved last week provides for a gradual increase in his base salary to $150,050.68 over the term of the agreement. This is in line with police chief’s salaries in the Bayshore region. The agreement expires on December 31, 2017. Chief Casaletto has announced his retirement effective December 31, 2017,” Gallo said.

Before the public hearing and closed section, the council started off its meeting by allowing Recycling Coordinator Donna Purcell and Keyport Spanish American Club Member Magali Rivera to award the winners of this year’s Keyport Recycling Poster Contest.

The first place winner for a second year in a row was third grader Douglas Graham. The second place winner was his twin brother Thomas Graham. Both winners received a certificate of recognition and Douglas also received a $20 Barnes and Nobles gift card.